Father Admits to Force Feeding 3-Year-Old Milk Until She Choked and Died: Police

The father of a 3-year-old Texas girl, who had initially declared his daughter missing, has admitted to forcing milk down his daughter’s throat until she started choking and later died, police said Tuesday.

Wesley Mathews came clean about what he said really happened to his daughter Sherin on the morning of Oct. 7, according to a Richardson police report. The alleged admission on Monday came days after authorities said they believe they found her body.

The father first told police Sherin vanished about 3 a.m. after he instructed her to go stand by a tree outside as punishment for not drinking her milk. He changed his story Monday to say he was frustrated after the toddler refused to drink her milk in the garage.

Mathews told police his daughter “wouldn’t listen to him,” according to a police report. After she began to drink the milk on her own, Mathews “physically assisted” her until she “began to choke,” authorities said.

“She was coughing and her breathing slowed,” the police report said. “Eventually, Wesley Mathews no longer felt a pulse on the child and believed she had died.”

Mathews then allegedly said he removed his daughter’s body from the home, according to police.

Authorities on Tuesday confirmed the body they found Sunday in a culvert about half a mile from Sherin’s home was Sherin’s. Mathews turned himself into police Monday and gave an “alternate statement of events” about what happened to his daughter, police said. Mathews was then charged with injury to a child, a first-degree felon and was being held in jail with a $1 million bond Monday. Mathews was initially arrested for abandoning or endangering a child, but he had posted bond. 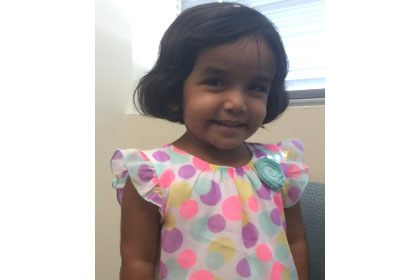