The family of one of the four U.S. soldiers recently killed in combat in Niger hopes the tragedy will shed light on any “mistakes” the military might have made leading to the deadly ambush in the African country.

Staff Sgt. Dustin Wright’s family said in a statement Tuesday that they do not blame President Donald Trump or the U.S. Army for the death of the 29-year-old Green Beret from Georgia — but they are “patiently” waiting for answers on how the attack happened and why all four soldiers were not able to survive.

“Even with adequate resources, a fully manned team and armored vehicles, these brave men would have been lucky to exit this situation with their lives,” Wright’s brother, Will, said in a statement to ABC News, on behalf of his family. “Our hope through this tragedy is to discern where, if any, mistakes were made and to fix them going forward. We will wait patiently and work with our government and military, not against them, to find answers.”

The family’s remarks come hours after Marine Gen. Joseph Dunford, chairman of the Joint Chiefs of Staff, left some questions unanswered during a Monday news conference about the assault. “We owe you more information, and more importantly, we owe the families of the fallen more information,” Dunford told reporters.

Dunford said U.S. forces accompanied Nigerian units on a reconnaissance mission to gather information on Oct. 3. They came under enemy fire the following day as they were returning to their operating base, and only called for help an hour later.

“I make no judgment as to how long it took them to ask for support,” Dunford said. “I don’t know that they thought they needed support prior to that time. I don’t know how this attack unfolded. I don’t know what their initial assessment was of what they were confronted with.”

Wright, Black and Jeremiah Johnson were killed in action, and their bodies were evacuated that evening. However, Dunford said La David Johnson was missing until his body was found Oct. 6. La David Johnson’s death triggered controversy after a Florida lawmaker and the slain soldier’s family said Trump seemed to forget his name during a condolence call, and that the President also said the soldier “knew what he signed up for.”

La David Johnson’s pregnant widow, Myeshia Johnson, demanded answers about her husband’s death in an interview Monday with Good Morning America. “I want to know why it took them 48 hours to find my husband,” Myeshia Johnson said. “I don’t know how he got killed, where he got killed or anything. They never told me, and that’s what I’ve been trying to find out since day one.”

Wright’s family said he understood the dangers of serving in the military. They said they hoped an investigation into the attack would help other soldiers in the future.

“In short, nothing that comes from this report will bring our warriors back, but it can help to educate and prepare future operators to better combat our enemies,” their statement said. “We do not blame the Army or the President. War is hell, and even the best laid plans go to the wayside when the first bullet flies.” 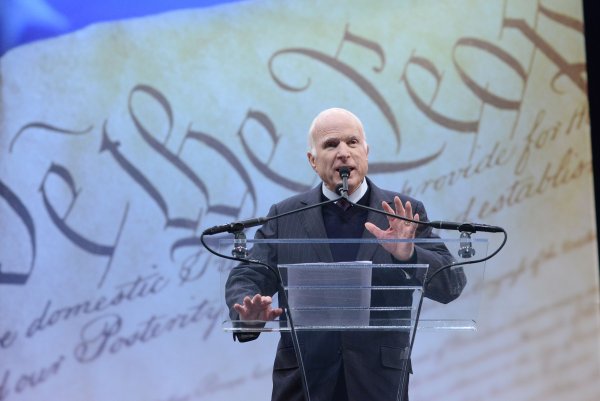 McCain Condemns Controversy Over Trump's Call to Widow
Next Up: Editor's Pick