Stranger Things season 2 is full of blink-and-you-miss it details. Luckily, eagle-eyed fans are here to catch them.

After all, the Duffer brothers are noted pop culture superfans, so why wouldn’t they tuck fun details into their own show like they did in season 1? Whether the easter eggs were ominous or hilarious, this season kept the winks coming. In fact, there were enough subtle — and not so subtle nods — for a Things obsessive to make watching out for them their new full-time job. (If only identifying metal band posters in Billy’s room was a marketable skill.) Just in case you were too busy freaking out over the monster’s apparent effort to kill everyone in Hawkins, we watched Stranger Things several times to pick out some hidden gems.

From your new favorite Hawkins kid to foreboding graffiti, here are nine odd observations you may have missed.

1. The kid who kept coming back

This. Kid. Remember the total card in the toga costume at the Halloween party who tells Nancy (Natalia Dyer) the punch is made of “pure fuel?” After his punch bowl moment with Nancy, we see that he couldn’t handle the fuel because he’s puking his guts out.

The show brings him back again before Nancy can answer Steve’s (Joe Keery) “do you love me?” question during their mid-basketball game moment. He interrupts Steve, yelling as always, to get him back in the game. Which brings us to the finale when Nancy describes the Snow Ball punch as “pure fuel” with a knowing smirk. The monster touched a lot of lives, but there’s no denying the kid had impact.

Before it’s totally clear to everyone that Dart is most definitely monster spawn, Dustin (Gaten Matarazzo) looks for him in a bathroom stall. Look closely and etched into the bathroom door in black, you can make out “TH…EVIL.” Recall we learned that “everyone” does graffiti in the bathroom, according to Mike (Finn Wolfhard). When it comes to Dart, it looks like the writing is literally on the wall.

Billy’s (Dacre Montgomery) a bad boy metal head with a poster of Metallica’s 1983 album “Kill ‘Em All” to prove it. That one’s prominently displayed in room during the scene where we learn about Billy’s troubled home life. But behind the door, we made out part of what looks like a poster for Tank’s 1982 album “Filth Hounds of Hades.” The English heavy metal band’s explosive album had a scary dog-themed cover, a possible nod to the Demodogs making life miserable circa 1984.

4. Dusty’s mom was a Democrat

We know the Wheelers are voting for Ronald Reagan in the 1984 presidential election, thanks to their lawn sign. It’s safe to assume many Hawkins families did. The popular incumbent candidate won the election that year in a landslide. But it looks like the iconic Henderson mother-son duo bucked the trend. Their lawn sign reads “Mondale Ferrero,” proving they went for former Vice President Walter Mondale who ran alongside Geraldine Ferrero on the the Democratic party ticket, losing to Reagan in November.

In season 2’s most unexpected scene, bad boy Billy charms Mrs. Wheeler (Cara Buono.) It’s fair to say she was already in the mood, as we see her enjoying bath time with Johanna Lindsey’s Heart of Thunder. The romance novel’s about a rough outlaw who brings the passion out of a woman no one ever dared go after, according to the promotional copy. Billy’s flattery coupled with her husband Ted’s inability to be anyone but Ted really made this read the perfect prelude to this suggestive encounter.

In the finale, when Steve catches up with Nancy after she’s been off “trauma bonding” with Jonathan, he’s going through the Byers’ things. One key possession you might have missed? Those iconic Christmas lights. Joyce (Winona Ryder) got more than any family’s fair share of the multi-colored bulbs from the store where she attempted to communicate with Will when he was on the Upside Down in season 1, making this a fun throwback wink. The new hot decor trend is obviously spooky crayon drawings that connect to form a map. Please keep up.

After Eleven (Millie Bobby Brown) learns her “momma” (Aimee Mullins) wants her to track down the lab subject she shared a room with in her flashback, the TV screen cuts to Action 8 News. We know the tube’s a supernatural conduit now, so it’s probably no coincidence that the TV channel foreshadows the new girl who shows Eleven that her tattoo reads “008.”

In episode 6 when Hopper (David Harbour) leaves Eleven a voicemail to tell her he’ll be home soon, he’s wearing the same blue bracelet he wore in season 1. Recall that in the first season, the show suggests Hopper’s daughter Sara died from cancer. But the true reason for her disappearance has been the subject of speculation among fans. Fueling the theory that something supernatural happened, Hopper puts it this way to Eleven in the season 2 finale: “she left us” because the black hole that he is “got her.” The fact that he’s still wearing this bracelet hints he won’t let Sara go, and his devotion to his new role in Eleven’s life is a part of that.

In one of the sweetest touches to a show with a lot of heart, we see the 3 Musketeer wrapper among the debris at the pumpkin patch in the finale. It’s from the Halloween candy bar that Dustin fed Dart with down in the tunnel. The life-saving move could suggest that Dustin’s willingness to accept Dart, an otherworldly, different creature paid off in the end because his pet remembered Dustin’s kindness and spared his friends from death by Demodog. 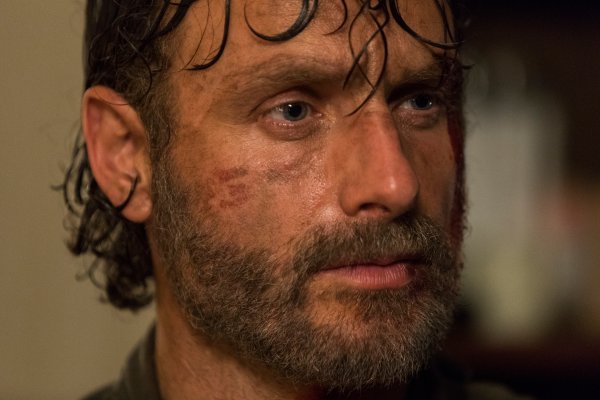 The Walking Dead Just Brought Back a Long-Forgotten Character
Next Up: Editor's Pick