Men often ask me what they can do to be supportive of women close to them who have been sexually or physically assaulted by other men. I often tell them what I learned long ago from advocates and social workers in the sexual assault and domestic violence fields. You should listen quietly and intently to whatever women want to share about their experiences, and reassure them that you’re most concerned about their well-being. Then gently ask what you can do to help.

The idea is not to jump in and try to “fix” the problem, but to let her know you care about her and support her in whatever way she deems most useful. In many instances, women who have been abused by men have already suffered a loss of control at the hands of an abuser; the last thing they need is for another man to jump in and seek to reassert control — however well-meaning he might be.

But men can and should do a lot more than provide compassionate support for survivors.

In response to the explosion of the #MeToo hashtag, in which millions of women and girls around the world have identified themselves as survivors of various forms of harassment and violence, men themselves have displayed a spectrum of emotions. These range from predictable denial and minimization of the issue all the way to full-fledged expressions of empathy and a desire to — finally! — take more of a stand against pervasive misogyny.

It is this latter response that has the most potential for transformative change. Of course, it’s important for a man — whether he’s a family member, lover or friend — to be there for a woman who needs to be heard. But the true test of men’s commitment to the women and girls in our lives is whether we can take our empathy to the next level and actually do something to address men’s violence against women.

Though women are the ones speaking up en masse about their experiences, the burden of changing the culture of abuse should not be on the shoulders of survivors. In the vast majority of cases of sexual harassment and sexual assault, men are the primary perpetrators — whether the victims are women or men. It is therefore men’s — all men’s — responsibility to do their part in preventing it from happening in the first place.

That means first having the moral integrity to look inward and be introspective about how our own attitudes and beliefs might be part of the problem. Then it means finding the courage to challenge and interrupt other men’s sexism, including when we see manifestations of it it among our friends, colleagues and others in our peer culture. This is a lot harder than it might first appear, because there is a reason why so few men to date have spoken out about men’s violence toward women.

It’s not just that men didn’t know how big of a problem this is. Sure, the #MeToo hashtag has catalyzed a giant consciousness-raising moment. One day it might be understood as a watershed moment for progressive social change. But millions of men have known for a long time that women around them experience sexist abuse in their everyday lives. They’ve probably witnessed it at work, in a bar or on the street. They might even be guilty of some of this behavior themselves. Yet, few men have seen fit to make these issues a true priority in either their personal or professional lives.

The reason why so few men have been willing to break their complicit silence on these matters is that too many of them fear the social backlash they face from other men when they choose to stand with women as their partners and allies in the struggle against abuse.

The #HowIWillChange hashtag, which men are using to publicly address how they’ll change their behavior in response to #MeToo, is a step in the right direction. But in coming days, months and years, the true test of whether men have what it takes to truly support women is whether or not a critical mass of them are willing to take a stand and make it clear to other men that they will no longer participate in or condone sexist behavior in any of its forms. Only then will we truly change the culture that has hurt so many women for far too long.

Jackson Katz is an educator, author and the co-founder of Mentors in Violence Prevention (MVP). 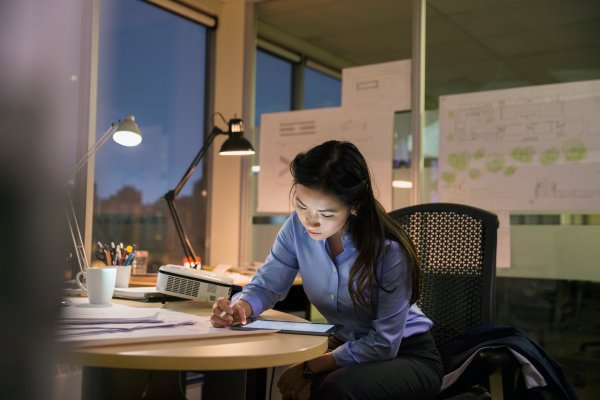 Boost Your Productivity at Work With This 5-Minute Routine
Next Up: Editor's Pick