Here's What Happened at the First-Ever Winter Olympics

National teams from Canada and the USA in action during an ice hockey match at the first Winter Olympics at Chamonix in 1924.
Topical Press Agency—Getty Images
By Jennifer Calfas

Before multiple cameras filmed skiers flying through the sky at enormous heights and snowboarders flipping in the air, Nordic skier Thorleif Haugh sped down the slopes and earned three gold medals.

That was in 1924, at the first Winter Olympics in Chamonix, France, where 16 countries gathered to compete in sports like figure skating, speed skating, hockey, curling and more between Jan. 25 and Feb. 5, 1924. While that was nearly a century ago, the first Winter Olympics in Chamonix reflected what still stands true today: a dominate Canadian hockey team, fewer nations competing than they do in the Summer Olympics and athletes who were catapulted into fame beyond their sports.

On the international stage, the first Winter Olympics in Chamonix were not a big deal at the time, according to David Wallechinsky, a prominent Olympic historian who has written a number of books on Olympics history. But it was the first of many Winter Olympics to come, setting a standard for future competition.

And now, fans are brimming with excitement for the 2018 Winter Olympic Games hosted in PyeongChang, South Korea. Today, the Winter Olympics are celebrated every four years, and Nordic, Slavic and North American countries continue to have the upper hand due to their access to these elite and expensive sports. This advantage makes it difficult for countries from warmer climates to compete for medals.

But the Games grow more each year, and in 2018, PyeongChang has the highest number of athletes ever to compete in the Winter Olympics with 2,925 athletes who come from 92 countries. In fact, a number of countries are making their debuts at the Winter Olympics this year, including Nigeria, Singapore, Ecuador, Eritrea, Kosovo and Malaysia.

As the 2018 Games captivate fans, here’s everything you need to know about the first Winter Olympics in 1924.

Who started the Winter Olympics?

The idea for having a designated Winter Olympic Games was floated at the seventh session of the IOC’s Olympic Congress held in June 1921, according to the official Olympic’s record of the event.

The concept received some pushback from Scandinavian countries, which had already participated in their own competition, called the Nordic Games, since 1901 and worried that creating a Winter Olympics would detract attention from it. However, the IOC agreed to an “international week of winter sport, part of a celebration of the Games of the VIII Olympiad” for 1924 in Paris.

Over the next few years, the IOC met to officially establish Chamonix as the host city for the first Winter Olympics and approve the 16 events. The French National Olympic Committee helped fund the new facilities in Chamonix to host the games as well. The first Winter Olympics were then held from Jan. 25, 1924 through Feb. 5, 1924, and about 10,000 people paid to witness the competition.

At the end of the 12-day event, then-IOC President Pierre de Coubertin lauded the games, saying “the recent unprecedented success of these Games gives us hope.”

“Winter sports have about them a certain purity, and that is why I was inclined to support and nurture them in this Olympic environment,” said then-IOC President Pierre de Coubertin at the closing of the games in 1924, according to the IOC.

In May 1925, the IOC officially named the events in Chamonix “the first Olympic Winter Games,” starting a series for good.

How many events were at the first Winter Olympics?

Initially dubbed Winter Sports Week, the 12-day program that became the first Winter Olympics featured six sports, 16 events and 16 countries competing. It was organized by the French National Olympic Committee, in partnership with the International Olympic Committee (IOC), following debates over elevating winter sports to the same level of attention as summer sports. The first modern Summer Olympic Games took place in Athens, Greece, in April 1896, and by the 1920s the summer games had already featured future winter events like figure skating and ice hockey.

How many athletes won medals at the first Winter Olympics?

Out of the 258 athletes who competed at the first Winter Olympics, just a few came out with Olympic medals and historic moments. Norway came out on top with 134.5 points, Finland got second with 76.5, Great Britain came in third with 30 and the United States placed fourth with 29 points, according to TIME’s report on the event in 1924.

Charles Jewtraw was one of the most memorable athletes to compete, as he was the first to win a gold medal. An underdog in the 500 meter speed skating competition, Jewtraw beat the 26 other athletes in the field with a “furious start” that drew “gasps” from the crowd and a time of 44.00, according to the Olympics’s official telling of the event. (He is also the world’s record holder for the 100 yard skate – 9 2/5 seconds.) Though he finished eighth in the 1,500 meter race and 13th in the 5,000 meter, the Olympics credits Jewtraw with inspiring other athletes, like the U.S.’s Jack Shea, who won two gold medals in speed skating at the Winter Olympics eight years later. In those other speed-skating races in 1924, Clas Thunberg from Finland dominated, earning three golds, one silver and one bronze medal.

Nordic skier Thorleif Haugh became a legend on the skis after winning three gold medals in three different events that paved the way for Norway’s dominance in the first Winter Olympics. As the IOC has detailed, a number of races in Norway have been named after the athlete and a bronze statue of him stands in his hometown. Haugh also took his skis to the slopes and competed in the ski jump competition, where he was believed for decades to have earned the bronze medal. But in the 1970s, the U.S.’s Anders Haugen was given the bronze medal after a scoring mistake was discovered.

Norwegian skier Jacob Tullin Thams is one of few Olympic athletes to have won medals at both the Winter and Summer Olympics. In Chamonix in 1924, Thams won gold in the ski jumping competition. Years later in 1936 at the Summer Olympics in Berlin, Thams won silver in the eight-meter sailing event.

Austrian ice skater Herma Szabo, just one of 11 female athletes competing at the first Winter Olympics, was born to skate. From a family of ice skating competitors, Szabo defeated her competition in 1924 — one of many international competitions she won. In Chamonix, her win was unanimous among the judges despite stiff competition from the U.S.’s Beatrix S. Loughran.

Though she got last place out of eight competitors in that event in 1924, Norwegian ice skater Sonja Henie stood out for her age. She was just 11 years old when she competed in the first Winter Olympics. After that, her career took off — she won three gold medals in 1928, 1932 and 1936, and she eventually starred in a number of films.

Did Canada always have a powerhouse hockey team?

Similar to the results of the recent Winter Olympic games, the Canadian hockey team proved to be a powerhouse in 1924. Over the course of the competition, the team scored 122 goals — with just three scored against them, the IOC has detailed.

“The hockey tournament was dominated by Canada, to put it mildly,” said Wallechinsky, the historian. “So Canadians think really highly of these games.”

TIME’s original report of the first Winter Olympics details the final match-up between Canada and the U.S., determining who would win gold and who would win silver. Canada won the rough game 6-1.

How have the Winter Olympics changed since 1924?

Men's Snowboarding Halfpipe Final during the
Shaun White competes in the

To start, there is more of nearly everything in today’s Winter Olympics — more countries, more sports, more athletes, more events and more medals. As with the Summer Olympics, the last few decades have brought additional events, participants and competition. And it wasn’t until 1992 when the Winter Olympics took place two years after the summer games (instead of during the same year).

Factors like television have added to the spectacle of the competition, and athletes have continued to grow into aspirational figures and representatives of their countries. But the Winter Olympics still face an issue that’s persisted for more than 90 years: the inaccessibility of the sports for some countries.

Wallechinsky said the elite, expensive, climate-dependent sports displayed in the Winter Olympics make it difficult for the competition to fully compare to the Summer Olympics. For example, 90 countries are expected to compete in Pyeongchang in 2018, far fewer than the more than 200 countries that participated in the 2016 Summer Olympic games in Rio de Janeiro. The strict qualification standards and requirement of expensive practice facilities for the Winter Olympics mean that many countries that typically pose a threat on the podium in the summer cannot do so in the winter.

“If you want to run 100 meters or even the marathon, you can just step outside your door and do it. If you want to play soccer, you can do that anywhere,” Wallechinsky said. “But if you want to compete in luge? I don’t think so. Alpine skiing is a very expensive sport.”

Could more nations rise to the level of the podium in the future? “It’s hard for me to see,” Wallechinsky said. 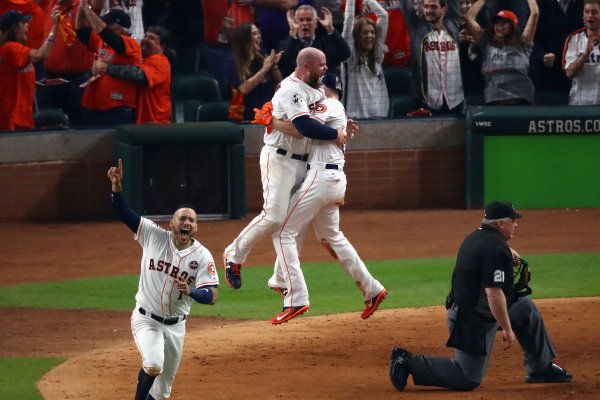 5 Reasons Why This Year's World Series Is the Weirdest in Recent History
Next Up: Editor's Pick