'I Cried at the End.' Kit Harington Got Emotional While Reading the Final Game of Thrones Episode Script

Kit Harington is no longer clueless.

The Game of Thrones actor revealed on BBC’s The One Show Friday that he bawled as he and his cast mates sat down for a read through of the final episode of the hit HBO show.

“We had a read through last week in fact, so I know everything now,” he said.

While the final episode won’t air until the series comes to an end with the eighth season in 2019, the actor said he couldn’t help but get emotional.

“I cried at the end,” he said. “You have to remember that eight years of it — no one really cares about it more than us.”

Harington continued, “It’s been an institution longer than any other institution I’ve been in. School, drama school, anything. I get a bit weepy thinking about it. It’s going to be a strange year saying goodbye to everyone and having last scenes with this person and that person. Not only you’re attached to it, loads of people around the world are attached to it.”

Despite being in the know of his famous character’s fate, Harington said he’s been sworn to secrecy.

With Game of Thrones ending, the British actor has much to look forward to, including a wedding to former costar Rose Leslie, whose character on the show said in the meme-worthy words: “You know nothing, Jon Snow.”

The two became engaged in September, with the couple also taking out a wedding announcement in their hometown newspaper of the Times in England.

As if they weren’t cute enough, Harington recently revealed that Leslie made him dress up as Snow for a “bad taste” costume party. 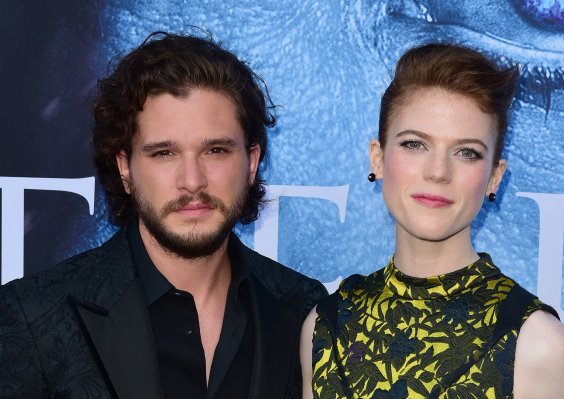 Kit Harington and Rose Leslie Are Engaged
Next Up: Editor's Pick