'It's Been a Rollercoaster.' Shawn Johnson East Reveals Miscarriage in Emotional Video

Shawn Johnson East and her husband Andrew East announced in an emotional YouTube video posted on Saturday that Johnson East had a miscarriage just two days after the couple found out they were pregnant.

“Today’s video is a little bit sensitive,” Johnson East, 25, said at the beginning of the video. “It’s not the happiest video but we feel like a lot of people go through this so we wanted to share it.”

The video — titled “pregnancy + heartbreak” — documented the couple’s whirlwind 48-hours pregnancy experience: from the moment when Johnson East showed herself crying joyful tears after taking two pregnancy tests which came back positive, to the moment the couple learned they had a miscarriage.

“The past 48 hours have been some of the happiest, scariest, and saddest times of my life,” Johnson East captioned the video. “My husband Andrew and I found out that we were unexpectedly pregnant, only to find out hours later some tragic news. I have been crying more than I ever have, but am still optimistic for what is next.”

After experiencing some unexpected bleeding, the video showed the couple driving to the doctor’s office where it was confirmed that the 2008 Olympian was miscarrying.

“So, it’s been a roller coaster of a few days,” Johnson East told the camera after the couple returned home. “We just got back from the doctor and I’m no longer pregnant. Somehow, I lost the pregnancy already. It sucks. It’s definitely no fun, guys … and having a doctor confirm that we miscarried doesn’t feel good.”

While holding up the pair of baby Converse sneakers Johnson East had given her husband to tell him she was pregnant, she assured her viewers that “We’ll use them again, of course.”

“This is by far the hardest video we’ve ever posted but we felt as though it was a story that needed to be shared as so many struggle with the same thing,” Johnson East wrote on Instagram alongside a screenshot from the video. “@andrewdeast I love you more than anything in this world and I know you are going to make the greatest Daddy in the world someday. Thank you for being my rock through all of this.”

The couple tied the knot on a private farm in rural Tennessee in April 2016. Reflecting on their one-year anniversary, Johnson East told PEOPLE “It’s been the craziest year of our lives.”

“I love him more every single day,” she added. “The first year is the hardest and best year of your life!” 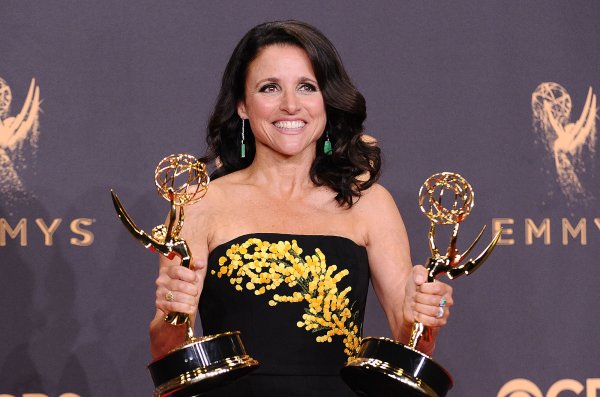 Julia Louis-Dreyfus Turned to Katy Perry to Give an Update on Her Breast Cancer Treatment
Next Up: Editor's Pick