Carles Puigdemont woke up this Saturday morning as president of Catalonia, but by lunchtime, he was out of a job. For the first time in its nearly 40 years of democracy, Spain has acted upon Article 155, the provision in its constitution that permits it to revoke powers from autonomous regions during times of crisis. And as Puigdemont knows better than anyone, Catalonia is nothing if not a crisis.

Three weeks after a referendum on secession that was banned by the Spanish constitution, but nonetheless brought more than 2 million to the polls to vote, Catalonia’s — and Spain’s — moment of truth has arrived.

The region has long felt a separate identity thanks to its distinct language and heritage, but the economic crisis and a 2010 court-ordered repeal of a revised autonomy agreement that defined Catalonia as a “nation,” helped push many to embrace secession.

Yet although the 43% of eligible voters who turned out to cast ballots in the Oct. 1 referendum resoundingly supported independence, Catalans today saw their self-determination dramatically diminished rather than increased. Once the measures that Prime Minister Mariano Rajoy proposed this morning are approved by the senate, the region will be under direct Spanish rule for the first time since democracy was restored in 1978, following the death of the dictator Franco.

“We are not suspending the autonomy or the self-government of Catalonia,” he said at a press conference after a cabinet meeting in which the measures were hammered out. “Rather, we are asking the Senate for the cessation [in power] of those persons who have put [Catalonia] outside the law.”

Those persons include Puigdemont, the vice president and the rest of his cabinet. In their places, Spanish ministries will assume their responsibilities until elections can be held sometime in the next six months — which, to many Catalans, sounds exactly like the suspension of their autonomy.

“They’re doing away with the government, they’re rescinding nearly all of its powers. That’s a textbook suspension of autonomy,” says Ferran Requejo, professor of political science at Barcelona’s Pompeu Fabra University. “It’s a coup d’etat from within.”

Supporters of the prime minister’s decision, however, point out that Mr. Puigdemont refused requests that he repeal the independence bid, which is clearly illegal under the Spanish constitution, and that now he is facing the consequences of that refusal.

“In the past, whenever there were conflicts with the state over autonomy, Catalonia at least maintained what it had; it might gain more but it didn’t lose anything,” says José Ignacio Torreblanca, opinion editor of the newspaper El País. “That’s not necessarily the case anymore.”

Although the Spanish Senate must first approve the measures Rajoy proposed, no obstruction is expected when the upper house convenes on Friday. Yet the game of cat and mouse that has lately occupied the Spanish and Catalan governments is hardly over. On Thursday, Puigdemont suggested in a letter to the prime minister that although the Catalan parliament had not declared independence yet, it may well do so were Article 155 invoked. On Saturday night, he warned that “Catalans cannot accept this attack,” before adding, “The Spanish state has situated itself outside of the rule of law.”

Still, Puigdemont stopped short of declaring independence, announcing instead that he was convoking a session of the Catalan parliament to discuss the Spanish government’s ‘intention to liquidate Catalonia’s self-government” and formulate a response. But once a declaration comes—if it comes—the repercussions are sure to be dramatic. Earlier in the day, the Spanish attorney general confirmed that should Puigdemont proclaim independence, he would be charged with rebellion, a crime punishable by 30 years in prison.

Whatever happens next, Catalonia’s options are diminishing.

Previously, some factions within the Catalan government were floating the idea that Puigdemont might call elections on his own, or form a new “concentrated” government that could project an image of unity as it amplifies its requests for dialogue. But if he is stripped of office, he will not be able to do either of those things.

Which is why Francesc Bellavista, national secretary for the Catalan National Assembly, a leading pro-independence organization, believes the Catalan president will have to act fast. “I think that before the week is out he’ll declare independence,” Bellavista says. “And then we’ll have two administrations: one that just declared independence, and another that denies the existence of the first.”

Bellavista was one of the organizers of a massive demonstration held on Saturday that Puigdemont and his government attended to protest the imprisonment earlier this week of two leaders of the independence movement for sedition. As thousands of people shouted ‘freedom’, he used nearly the exact same words to describe the Spanish government’s actions as Mariano Rajoy had employed earlier in the day in reference to the Catalan body. “They’re sidestepping the law. That is not democracy.” 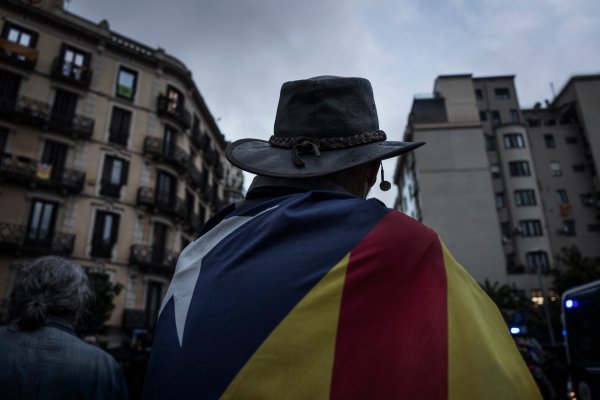 Spain Says It Is Ready to Suspend Catalonia's Autonomy
Next Up: Editor's Pick