Last month, my son Charlie celebrated his fifth wedding anniversary with his husband, Dave. Him finding the love of his life is a source of great joy for me. Planning the hometown reception should have been a joy, too. But there was a hitch. They were subject to discrimination that has left its mark even now, five years later. And that discrimination is the subject of a case now before the U.S. Supreme Court.

Five years ago, Charlie and Dave asked me to join them in Colorado as they shopped for a cake for their wedding reception. Like so many mothers before me, I was honored and excited to be a part of this step. But what should have been a fun afternoon turned into a very disturbing event.

We walked into the bakery for our appointment with a baker whose shop was close to where the reception would be held. Charlie had a portfolio full of designs and a list of flavors for their five-tier cake. We were motioned to a small table inside the bakery. The owner looked at Charlie and Dave and asked if this cake was for them. They said yes.

Immediately the owner told them that he would not sell them a wedding cake because he would not bake one for a same-sex couple. My son and Dave never even got to say what kind of cake they liked, nor what type of design they wanted. They were just turned away, because they are two men who love one another.

We went into that store happy. We left broken.

When we returned to our car, I noticed Charlie’s shoulders were shaking. I soon realized he was crying. All I could do was embrace him and tell him I loved him and that we would get through this. As a parent, no matter how grown your children are, you want to shield them from harm. I felt I had failed him. He felt he had failed me; he was embarrassed that I had witnessed such a heartless response by a stranger in a public business.

The next morning, I called the bakery to ask a question that I had not asked him the day before: Why? Why did he turn away my son and his fiancée? He said he is a Christian and did not believe in same-sex commitment celebrations or marriages. I told him I am a Christian, too, and that my God teaches us to love one another, to not judge. I asked him, How can you turn away two of God’s children?

When some people hear our story, they say, “Well, it was just a cake, why not order a cake from somewhere else? What’s the big deal?” But it was a big deal — a very big deal, and not just for Charlie and Dave.

This case is not about a cake. It’s not about artistic expression. It’s about discrimination.

It’s about whether bakeries and other businesses can hurt people like Charlie and Dave because of who they are. It doesn’t matter if they can get another cake. It’s about what happened that moment when they were denied service, and what that’s meant for them every day since. They were told they weren’t good enough to be served in their own community.

Life in this country has never been easy for gay people. In fact, five years ago, it wasn’t even possible for Charlie and Dave to get married in their home state of Colorado. They spent thousands of dollars when they hired a lawyer to draw up legal documents so they would be given the same legal rights that a heterosexual couple receives when they marry. They had to travel across the country to get married in Massachusetts, where it had become legal.

That day in Masterpiece Cakeshop, they got hurt. They live in a state that has a long-standing law that protects its residents from discrimination, including discrimination based on sexual orientation. But in that moment, they were not protected.

I still see today how that day changed their lives. When they walk into a store, there’s that nagging feeling in the back of their mind telling them that this might be the day that they get turned away again. Charlie and Dave now think twice, and sometimes don’t even reveal, that they are husband and husband when they’re around strangers.

And they wonder, now that their case will be heard by the Supreme Court, if the Court will affirm the promise that they deserved to be treated like any other customer when they go into a store. Should the bakery prevail here, Charlie and Dave and countless others will have to live under that constant cloud of uncertainty, of fear.

I hope the Supreme Court justices see this case for what it is: an attempt to attack others and broaden discrimination. I want nothing more for my son, for Dave — for everyone — than to be able to live their lives without fear of discrimination because of who you are and who you love.

Correction: The original version of the author’s biography misstated her son’s role in the mentioned Supreme Court case. He is a respondent, not a plaintiff. 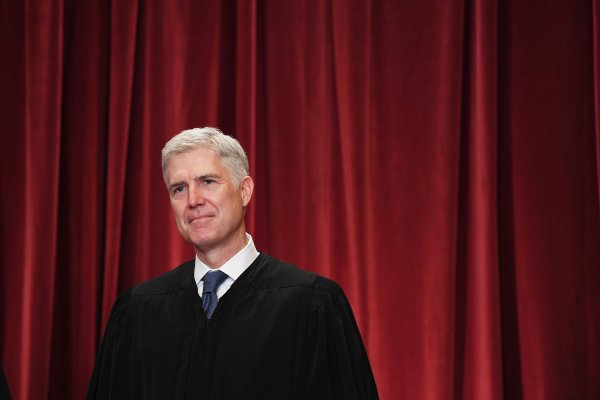 Neil Gorsuch Is Already Acting Like He’s Been on the Supreme Court for Years
Next Up: Editor's Pick