This Is the Happiest City in the U.S.

When deciphering who leads the happiest lives, it’s likely their surroundings probably involve open water, nature and lots of bikers.

That’s according to National Geographic, which revealed its ranking of the 25 happiest cities in the U.S. on Wednesday. Boulder, Colo., where stunning mountainous trails, preservation habits and “sustainable urban development” bolster a thriving community, won the coveted title of the country’s happiest city, according to the publication.

National Geographic worked with Gallup and author Dan Buettner, whose career has focused on exploring parts of the world where people live long, happy lives, to identify and rank these cities. The group created this list after conducting nearly 250,000 interviews with questions about the emotional, physical and financial well-being, among other characteristics, of people around the country.

The final rankings include cities across the country, ranging from Midwestern cities like Minneapolis and Ann Arbor, Mich., to southern ones like Austin, Texas and Naples, Fla. Eight states, including the second-ranked Santa Cruz, Calif., and fifth-ranked San Luis Obispo, Calif., fall along the California coastline, and three of them, including Boulder and fourth-ranked Fort Collins, Colo., are in Colorado. Charlottesville, Va., rounded out the top five.

But what exactly makes these cities so happy? A common factor among these cities was their bike-ability, closeness to water and surrounding scenery, Buettner said in National Geographic.

“There’s a high correlation between bike-ability and happiness in a city,” Buettner said in the publication. “In Boulder you’re more likely to hear the whoosh of a cyclist than the shrill of a siren compared to places like Dallas, Tallahassee or Los Angeles. Cities like Boulder question the unquestioned virtues of development.”

“This benefits visitors, who can experience an emphasis on greenery, a high-quality culinary community, limited marketing onslaught and no billboards,” he added. 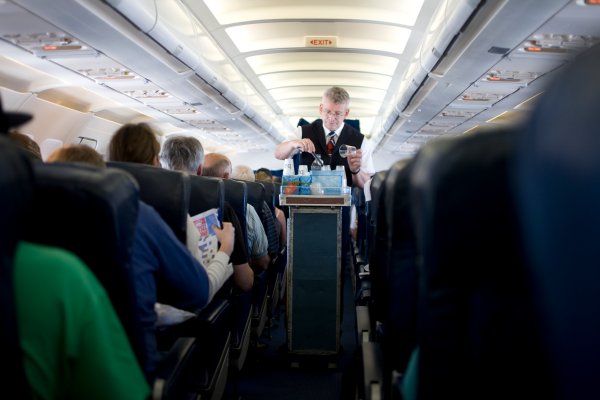 Why You Should Think Twice Before Drinking Tap Water on a Plane, According to a Flight Attendant
Next Up: Editor's Pick