In a scene in Daniel Radcliffe’s new movie Jungle, the young man he plays wakes up in an uncomfortable bed, alone and in pain. The side of his forehead above his eye is burning and he instinctively touches his hand to it, grimacing. He then reaches into his bag and pulls out a pair of tweezers. Shaking, he takes the metallic implement to his forehead and presses it through the irritated skin, which is bulging in a suspicious manner. Seconds later, a parasitic worm slowly wriggles its way out of the hole. It’s a scene so gross even Lord Voldemort would have to look away.

Unfortunately for the characters involved, there are no wands in Jungle, due out Oct. 20. The gripping adventure-drama is based on the true story of Yossi Ghinsberg, an Israel backpacker who, at 22, nearly died in the Bolivian rainforest when he found himself lost there for three weeks in the 1980s.

Jungle is the latest relatively low-budget indie Radcliffe has embraced since his Harry Potter days. Last year he starred as a farting corpse alongside Paul Dano in the somewhat out-there marooned-in-the-wilderness movie Swiss Army Man, and he’s tackled similarly edgy roles in the horror film Horns, the drama Kill Your Darlings and the thriller Imperium.

A few days before Jungle hits theaters, the actor, 28, sat down with TIME in London to chat about his (lack of) survival skills, being the butt of a John Oliver joke and whether he’d ever consider making an appearance in the Fantastic Beasts franchise.

TIME: What drew you to Jungle?

Daniel Radcliffe: The story itself is a survival story, but the thing I found very moving is the notion that there is this kernel inside people that refuses to die. Obviously in this situation, it is in a man surviving alone in the jungle, but I think this indestructible will to live applies to people in war or under terrible regimes and immense hardships around the world. I like to think there is something fundamental in all of us which can get activated when you’re really pushed to an extreme.

How would you survive if you were lost in the jungle for three weeks? I’d probably last 15 minutes.

I hope to God I never will be thrown into that situation. Like you, I’d probably survive really badly. I didn’t ever do the Boy Scouts, I can’t light a fire… If I got lost with somebody who was experienced with that kind of stuff I feel I would survive very well — I’d be a good helper. But if you were lost with me you’d be without a hope, really, especially if we were somewhere near water as I would probably drown.

Can you not swim?

I’m not a strong swimmer at all. I can swim, but I can’t float or tread water. You know those films like Open Water and stuff? That’s my actual worst nightmare.

So you’d never do a shark film?

I’ve done a lot of filming in water so I don’t mind being in and around it. But I don’t think I could do a shark film. The amount of water work that would be required and the amount of time in the open water — I don’t think I’d be happy about that.

How much time did you actually spend in the jungle when making the movie?

We spent about three or four weeks in the Colombian jungle and about three weeks in Australia. It was a tough film for the crew; they had to lug heavy camera equipment in and out of the jungle, which was about a two-mile trek. There’s something bonding about hard shoots like that, when you feel like you’re all in it together.

Where did you stay for most of the filming?

In Colombia we stayed in one of the most beautiful hotels I’ve ever been in. It felt like the lair of a Bond villain, in the least evil way possible.

Did it feel strange going from being on set to these luxurious surroundings?

Yes, very. I’m not a method actor at all, but I just felt like it would feel weird, too incongruous, to be playing this guy who went through this very harrowing time while living this incredibly comfortable, beautiful, luxurious life when not on set. So, while I was staying in the hotel I tried to not eat just to keep my general energy a bit down.

How closely did you work with Yossi Ghinsberg, whose memoir Jungle is based on?

Prior to filming we spoke for about four hours on Skype over separate conversations, where I just picked his brains. Yossi was on set a lot, particularly for the filming in Colombia. When you’re making a film about somebody’s life, that person would be well within their rights to step in and say, “I didn’t do it like that” or “that didn’t happen like that,” but he didn’t. He was really supportive of the whole process and accepted that certain things were going to be changed from how they were in reality.

Daniel Radcliffe writes autographs and takes selfies with fans as he attends the 'Imperium' premiere during the 12th Zurich Film Festival on September 30, 2016 in Zurich, Switzerland.
Alexander Koerner—Getty Images

Your recent movies have been relatively low-budget. Was it a conscious decision to move away from big studio films and pursue these more indie roles?

I’m in a position where I don’t have to do anything I don’t want to; the only reason I have to do a script is because I’m passionate about it and I’m of the opinion that the majority of the really interesting scripts I read at the moment are not being done by studios. This is good because you get a huge amount of creative freedom, but bad because indies are frustratingly hard to actually get made. I’ve had a couple of genuine disappointments in the years since Potter, but I’ve been really lucky with things like Kill Your Darlings, Swiss Army Man and Imperium.

Are there any particular directors you’d like to work with?

I have a wish-list of directors like Wes Anderson, Paul Thomas Anderson, the Coen Brothers, Martin McDonagh and Quentin Tarantino — although I don’t know what role there is for me in a Tarantino film, but hey, who knows! Equally I love working with first-time directors, like Daniel Scheinert and Dan Kwan on Swiss Army Man and John Krokidas on Kill Your Darlings.

I’m signed on to do a movie called Guns Akimbo, which is the first time I’ll have done a proper action movie. Generally speaking, I don’t think there’s role for me in a lot of action movies and ones I feel like playing. But I read this one and it felt perfect. It’s the way a guy like me can fit into an action movie and it’s really good fun.

What do you mean by a guy like you?

I mean like not someone like Dwayne Johnson or the Hemsworths, who as well as being really good actors are just made to be action movie stars. Although I am fit and strong for my height, generally when I read scripts about some guy who beats the sh-t out of loads of people with his bare hands, I just don’t know whether an audience would buy me doing that.

Could you see yourself getting involved with another big franchise in the future?

I absolutely could see myself doing another, but it would depend on the script. It would be fun to do another one of those crazy studio movies. It was amazing to start off with Potter and there’s also a lot that I don’t miss about [it]. I would never balk at going into a franchise, but I’m not racing to get there now either.

Daniel Radcliffe (L), Emma Watson, (C) and Rupert Grint pose for photographers as they arrive to attend the World Premiere of 'Harry Potter And The Deathly Hallows: Part One' in Leicester Square, central London on November 11, 2010.
BEN STANSALL—AFP/Getty Images

If asked, would you make an appearance in Fantastic Beasts?

I don’t think so? But again, if it was something that I thought would be fun to do and I’d enjoy, then great. Again, I’m not racing to go back there.

Are you beginning to get recognized for more than just Harry Potter?

Most people recognize me for Potter, I’m under no illusions about that. But I do get people saying how much they enjoyed Swiss Army Man or Imperium and that’s always really pleasing.

I have to say, I was watching John Oliver the other night and he was doing a whole segment about Equifax, where he said something like, “Equifax sounds like a production of a play where Daniel Radcliffe plays a horse which f-cks a fax machine,” referring to my 2007 play, Equus. The fact that me doing Equus 10 years ago has become enough of a cultural reference made me genuinely super happy. I was like, “That’s a joke about me that’s not a Harry Potter joke. I’m very appreciative of that!”

You always have a little moment of tensing and feeling like, “Oh God, what are they going to say?” and then you go, “Ah no, it’s fine.” It’s funny and odd, but I also find that kind of thing weirdly flattering as well. There’s this Cards Against Humanity card which features my name in a fairly sort of dirty context and I’ve signed that card a lot for people at stage doors. I find all that stuff genuinely really funny.

The John Oliver joke was very funny and I certainly didn’t see it as it being mean at all. I’m sure people have made those jokes about me but I haven’t really seen them, thankfully. Generally speaking, if that’s the stuff you were getting angry about, you’re getting angry about the wrong things.

You’re not on social media. Why is that?

Well, I’m on Google Plus, but I don’t know if that counts and it’s a stretch to say I’m even on that. I don’t have Twitter because I am too opinionated and would get angry with somebody if they were saying something sh-tty about a friend. I would get into fights with people. I’d be one of those people.

I know that stuff’s there and I think it’s important to acknowledge and talk about, but to actually see how many people out there are being really hateful to each other is exhausting and depressing. And particularly if you’re a girl, whether famous or not famous, social media seems like fresh hell. 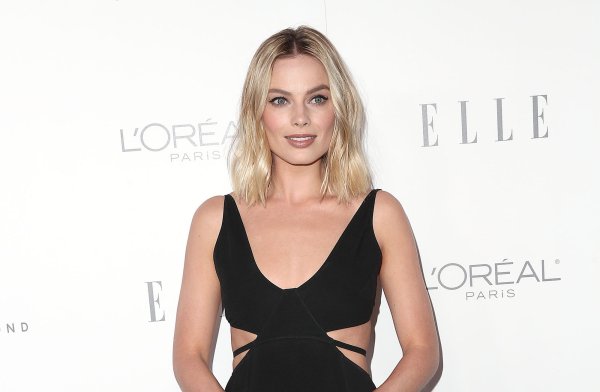 Here's Your First Look at Margot Robbie as Tonya Harding in the I, Tonya Trailer
Next Up: Editor's Pick