Amid Tragedy in California’s Wine Country, There’s Some Cause for Hope

On Sunday, Oct. 8, I was having dinner at the winery Ovid in Napa Valley with Jack Bittner and his wife Sara. It was a sort-of-business, sort-of-social get-together that’s characteristic of a life in wine: Jack runs the place, and I write about wine. The night was perfect–early October, harvest, the best time to be in Napa. But it was strangely windy.

Around 9, Sara took their daughter down the hill to their home in St. Helena while Jack and I stayed to talk. The wind moaned and shuddered, an eerie Halloween gale that seemed about three weeks too early. At some point I said something like, “That wind is nuts.” We chatted a bit longer and then called it a night, because he had to be back at work at 4 a.m. to pick the last of their petit verdot. At least that was the plan.

Over the next few hours seven wildfires broke out in Northern California’s wine region. The “Diablo winds,” blowing 70 m.p.h. at times, spread the flames with terrifying speed. Add to that already high temperatures, humidity in the single digits and a wet winter that had produced abundant growth in the forested hills, and you had the perfect conditions for a disaster.

As of Oct. 18 the fires have burned across more than 210,000 acres, hitting Napa, Sonoma, Solano and Mendocino counties particularly hard. More than 5,700 homes and businesses have been destroyed, and over 40 people have died, a grim toll that is sure to rise. About 60 people remain missing. It is the most destructive fire here in decades.

The flames aren’t quenched yet, but they aren’t growing. The lethal Tubbs fire, which tore through densely populated neighborhoods in Santa Rosa, is now more than 90% contained. The massive Atlas fire, on the eastern side of Napa Valley, is 83% contained. Evacuation orders, at one point affecting about 100,000 people, are being lifted. The firefighters, numbering more than 10,000, some from as far away as Australia, are slowly winning.

A couple of days ago I stood with Ray Signorello next to the ruins of his winery on the Silverado Trail in Napa. The last time I was there, a few years ago, he told me about the chef they had just hired and the culinary program he hoped to ramp up for visitors to the winery. “I guess we’ll take that on the road for a bit,” he now says.

The winery, Signorello says, had burned straight up, like one of those chimneys used for lighting coals in a backyard grill. As he considered the scorched brick and twisted metal in front of us, Signorello says, “As bad as this is, it could have been worse. My wife was there that night–she called me to say there was fire on the ridge behind us and she was getting out. Which she did.”

Wineries make up only a small percentage of what’s been lost. Whole neighborhoods in Santa Rosa burned. Karissa Kruse, president of Sonoma County Winegrowers, lived in one of them, Fountaingrove. She recalls a neighbor pounding on her door at 2:30 a.m. “The streets were just chaos,” Kruse says. “You looked up in the hills and saw a wall of orange coming. I got a flashlight, got on some clothes, grabbed the cats, grabbed my computer … I was out of there in 18 minutes.” Kruse’s house burned to the ground.

The story of these fires is tragic for many people, and it is still being written. But there are reasons to be optimistic. Vineyards, as it turns out, don’t burn well. In fact, at this time of year, with green leaves still on the vines and trunks full of moisture, they act as effective firebreaks (one reason the damage to wineries was far less than what one might expect). For another, despite the expectations created by images of hillsides ablaze and torched buildings, the 2017 vintage here will most likely be unaffected. Close to 85% of the grapes had already been harvested before the fires started; more in some areas, less in others. The omnipresent smoke may affect the flavors of fruit left on the vine, but the juice already fermenting in tanks and barrels should be fine. And vast portions of the region were untouched by the flames; Napa and Sonoma counties together form an area about twice the size of Rhode Island.

When I finally reached Jack Bittner, I learned he had spent several hours that Sunday fighting fires at his in-laws’ house near Calistoga. “Miraculously, it’s still there … though it’s a charred moonscape in all directions,” he says. Then he went back up to Ovid and, like vintners all over Napa and Sonoma, fires be damned, got the last ton of grapes in.

Isle is the executive wine editor of Food & Wine 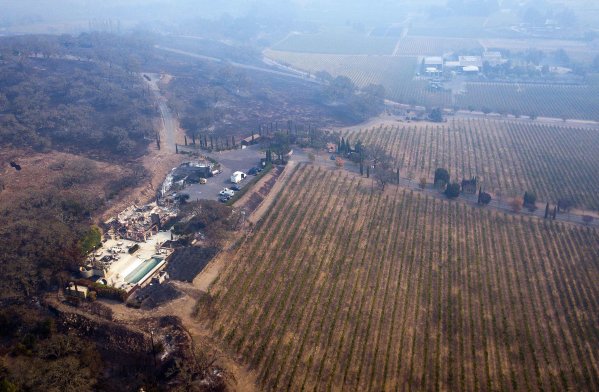 California Winemakers Look to Rebuild After Fires
Next Up: Editor's Pick