Megyn Kelly: Now We Need Men as Our Allies

When the Roger Ailes sexual-harassment scandal broke in July 2016 and he was forced out of Fox News in disgrace, I thought we might be at the beginning of a sea change. When Silicon Valley began erupting with similar stories this past spring, I thought, Yes, here we go. Now that we are in the midst of the Harvey Weinstein scandal, many are proclaiming, “This is it. It ends now.” My take? Maybe. But we have a lot of work to do.

First and foremost, the victim blaming must stop. Often it seems there is almost a presumption that those who get harassed must have done something to invite it, which leads too many victims to stay silent. Actress Mayim Bialik thought this was the time to discuss the virtues of “not being a perfect ten” or being someone who hasn’t had plastic surgery or who avoids flirting with men. (She apologized.) Donna Karan also had to apologize for suggesting that women are “asking for it.” How insulting to victims. There are laws in this country. Wearing a short skirt doesn’t violate them. Shoving one’s tongue down an employee’s throat does.

Go to HR? HR may have to tell the harasser — and he may survive the bout. “He cannot legally retaliate,” people tell us. We know. But we also know the practical realities of starting wars with powerful men. So most women stay quiet. And then if they do find the courage to come forward, the first thing they’re asked is, “Did you report it?” (In my case, I did tell a supervisor that Ailes had harassed me. Nothing was done.)

More women speaking up is huge. But more women in power — at or near the top of companies or industries — is equally important. What women need is someone they feel safe approaching. An outside lawyer whose paycheck is not dependent on the boss, perhaps — Fox News now has such a person. But women will still be reluctant unless they believe this person isn’t loyal to the company first.

Perhaps the most critical solution lies in partnership with the men. The harassers must stop; we know this. But male titans of industry must stand up for decency. Shout it from the rooftops and whisper it in the bars when women aren’t around, because we don’t often get invited to the late-night drinks where those conversations happen. Those are the moments. Women alone cannot change the culture. We need men. Evolved ones. Kind ones. Brave and scared ones, like those who fear expulsion from the fraternity if they object to a male colleague’s bad behavior.

All of this is easier in an environment in which the law and one’s principles are vigorously enforced, even and especially when no one is looking. In other words, it’s not women vs. men; it’s ethical vs. not. Which side are you on?

Write to Megyn Kelly at megynkelly. 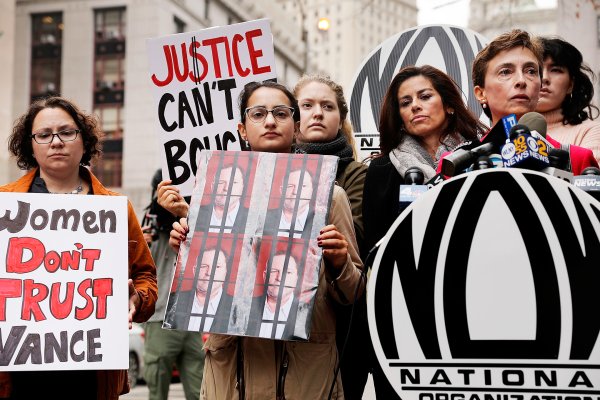 When Men See Other Men Behaving Badly
Next Up: Editor's Pick