Less than a full day after cheering a bipartisan deal being worked out in Congress to stabilize the individual insurance marketplace, President Donald Trump suggested he couldn’t support it.

In a tweet sent Wednesday morning, Trump said that while he stood behind Sen. Lamar Alexander of Tennessee, who worked with Washington Sen. Patty Murray on the compromise, he could “never support bailing out” the insurance companies he says have made a “fortune” with the Affordable Care Act.

The proposal from Sens. Alexander and Murray, who serve as the chair and ranking member of the Senate Committee on Health, Education, Labor, and Pensions, does include two years worth of cost-sharing reduction payments, which help lower the costs of premiums for consumers, but the chair pushed back on the notion that the payments equal a bailout.

“We are having the strongest possible language in the Alexander-Murray agreement to make sure the cost-sharing reduction payments for 2018 and 2019 benefit the low income Americans to help them pay for their insurance and don’t benefit the insurance companies,” Sen. Alexander told reporters at the HELP committee on Wednesday.

Senate Minority Leader Chuck Schumer was a bit more frank: “The president ought to start understanding what’s in the legislation before he tweets,” he said. “The Murray-Alexander bill specifically prohibited companies from getting CSR payments. There would be no double dipping.”

Such was the dilemma facing Senators on Wednesday. After working to craft a deal to stabilize the insurance markets, selling it to the Republicans in Congress and the White House who want the Affordable Care Act repealed began presenting its own set of challenges shortly after the two sides announced they had a plan.

For his part, Alexander said the plan includes provisions that could be considered victories for Republicans who have been trying to nix Obamacare for the greater part of the past eight years. The two sides agreed to expand access to waivers that allow states to offer plans that don’t meet all of the requirements under Obamacare, something Republicans have been pushing for. They also agreed to expand access to catastrophic plans—the low-premium, high-deductible insurance plans that are currently only available to young people on the individual marketplace. The plan would also redirect funding that could be used by the states to help people enroll, outreach that Democrats have blasted Trump for seeking to undercut.

The point of the bill, Alexander said on the Senate floor on Tuesday, is to avoid the “chaos” of skyrocketing premiums and rising medical debt that are predicted to come if the payments to insurers stop. “I don’t know a Democrat or a Republican who benefits from chaos,” he said.

Some of that chaos appears to have been intentionally inflicted by Trump. On Oct. 12, the president signed an executive order that could give Americans access to cheap insurance plans that offer fewer protections. Then, the White House announced the end of “cost-sharing reduction” payments that are designed to lower insurance costs for poorer Americans. The goal, as Trump’s former chief strategist Steve Bannon said, was to “blow up” President Obama’s signature legislative achievement.

But the president has sent mixed messages on whether he actually wants to do that. He’s argued that his executive actions helped bring Democrats to the negotiating table (they were already in talks) and said he’d back a “short-term fix” only to tweet that he doesn’t support “bailing out” insurance companies and bragged that their stocks tanked. “Lamar Alexander is working on it very hard,” Trump said of the bill on Wednesday. “And if something can happen that’s fine, but I won’t do anything to enrich the insurance companies, because right now the insurance companies are being enriched.”

For now, members of Congress from both parties are moving ahead. Senators are working to make sure the bill has a solid number of bipartisan co-sponsors when the legislative language is released, which could happen as soon as Thursday.

Schumer said that the “overwhelming majority” of Democrats are on board with the plan, noting that Sen. Murray was met with roaring applause when she announced the deal to her colleagues on Tuesday. The goal is to get at least 10 co-sponsors on both sides of the aisle to secure the bill’s future.

Outside of the Senate chambers on Wednesday, several Republican Senators were non-committal. Some said they wanted to hear more from Sen. Alexander, while others were not sure if the bill would pass muster as-is. “I think in order to pass the House we’re going to need more than Alexander-Murray,” said Sen. Ron Johnson of Wisconsin. “Doesn’t sound like it could pass in the House so if it passes in the Senate, what good does do?”

Sen. John Barrasso of Wyoming said he supports “the continuation of the work so they get to a point where it’s something that the president would encourage.” Sen. John Thune of South Dakota, who chairs the Senate Republican Conference, said the bill is “kind of an open question.” But not every Senator was non-committal. Sen. John McCain of Arizona said he would support the bill in a statement on Wednesday. Sens. Lisa Murkowski of Alaska and Susan Collins of Maine have also cheered the bill.

Sen. Bob Corker of Tennessee told reporters on Wednesday that he is a “proud co-sponsor” of the bill. “It’s a good piece of legislation,” he said while moving his arms in a sweeping motion as elevator doors closed.

It remains unclear whether or not Trump, in the end, would be willing to keep Obamacare alive. But there is agreement among Republicans that securing his support on the legislation would be crucial.

Sen. Mike Rounds of South Dakota, who is also co-sponsoring the bill, said Wednesday that right now, “it’s kind of like weather in South Dakota. It’ll change on a regular basis until we’re all satisfied.” 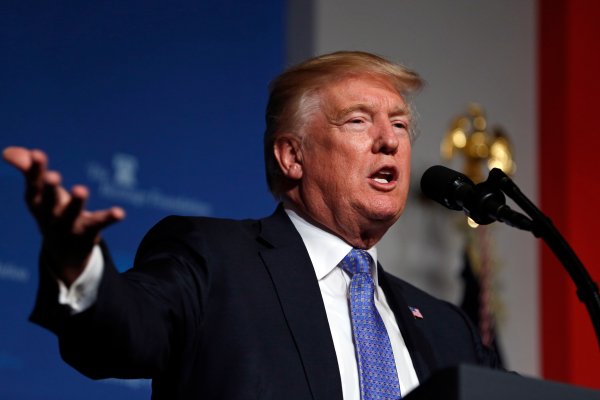 The Latest Obamacare Fight Centers on Insurance Subsidies. Here's What They Are and How They Will Affect Your Costs
Next Up: Editor's Pick