The Rohingya Exodus Surges Again, With 20,000 More Arriving at the Bangladesh Border

Another massive wave of Rohingya refugees has reached the border of Bangladesh, further deepening a crisis that has seen more than half a million people pour into one of the world’s most densely populated countries in the span of less than eight weeks.

An estimated 20,000 Rohingya, a persecuted Muslim minority from western Myanmar’s Rakhine state, arrived Monday attempting to enter Anjumanpara village in the Palongkhali district, bringing the total arrivals over the past week to about 38,000.

“The inflow is continuing,” Mohammad Abul Kalam, the joint secretary of Bangladesh’s Refugee Relief and Repatriation Commission, tells TIME in an interview. “About a week ago the inflow seemed to lower, but then it accelerated again.”

The throng of refugees arrived Monday morning, amassing on paddy fields on the Bangladeshi side of the border. Some stood in thick mud for hours as border guards prevented them from walking further inland to refugee camps where many had friends and family members.

Thousands more were lined up behind them, a contour of colored headscarves and umbrellas reaching into the horizon. Many, possibly most, are still standing on no man’s land, beyond the fence marking Myanmar’s border but not yet within Bangladeshi territory.

“There are a lot more waiting on the other side,” Kalam said. With so many new mouths to feed and a local population beginning to feel the weight of the crisis, he stressed that it is now “the moral responsibility of the international community to stand by Bangladesh.”

Aid workers attended the tired and dehydrated refugees as they waited for word from the authorities about when they could push forward. They endured a night of rain without cover, then the blistering climate of a Bangladeshi day, with the mercury reaching 30C (86F) even in mid October.

“We didn’t get any sleep last night,” said Salim, a 27-year-old Rohingya man who said he walked for a week with his family of nine before reaching the border. “The rain was not too heavy, but it was so humid and hot; for the children, it was terrible.”

Read more: The story behind the most haunting images of the Rohingya exodus

When he set out from his village, Salim was aware of the miseries ahead; more than half a million others had made the exodus since Aug. 25, when an attack by Rohingya insurgents triggered a brutal military crackdown on civilians. When the first waves began showing up at the Bangladeshi border, no one anticipated the sheer volume of desperate villagers that would later arrive barefoot, exhausted and traumatized.

The Myanmar military has since been accused of a campaign of ethnic cleansing, which the government vehemently denies. Those outside the country’s borders, however, cite evidence of a systematic purge of the stateless minority; satellite imagery shows hundreds of villages razed, while aid workers say refugees arrived with injuries consistent with gunshot wounds, landmine blasts and sexual torture such as lacerations and bite marks.

New arrivals don’t bear the same signs of trauma, but they say the terror continues. Some Bangladeshi officials worry that those Rohingya who remain in Myanmar may try to cross the border to receive aid or join family who fled, adding to the burden this poor country already bears. In refugee camps, they will be sheltered, fed and treated for sickness; in Rakhine state, they live in fear of an ambush and have been almost completely denied humanitarian assistance.

“We decided to move because the danger was quite close to us,” said Fariza, who is about 30 years old and in the late stages of her fourth pregnancy. “If they were to come to our village there would be no way for me to run. Watching what happened to the village next to ours, we had to leave.”

Seated in the shade outside a makeshift clinic, Fariza is visibly fatigued but looks much healthier than she did the night before, when TIME saw her ill and half-conscious, limbs hanging limply over the edges of a woven basket that her brothers-in-law used to carry her weak body across the mud. After some medicine and a bit of rest, on Tuesday she was strong enough to speak.

“I’m feeling quite sick so I don’t want to talk too much,” she tells TIME, tears dripping down her cheeks, “but we want justice.” 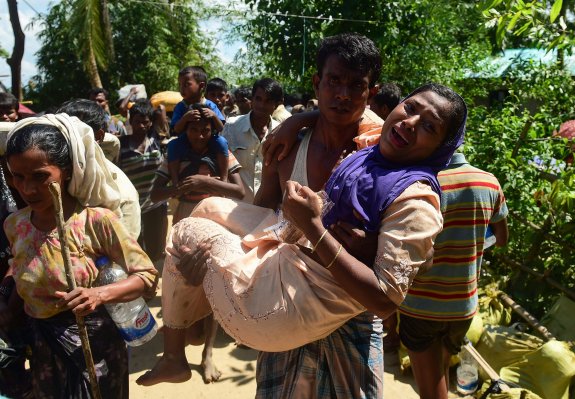 Mud and Hunger: Among the Desperate Rohingya Still Pouring into Bangladesh
Next Up: Editor's Pick