What to Know About Daphne Caruana Galizia, the Journalist Killed By a Car Bomb in Malta

Police and forensic experts inspect the wreckage of a car bomb believed to have killed journalist and blogger Daphne Caruana Galizia close to her home in Bidnija, Malta, on October 16, 2017.
AFP/Getty Images
By Billy Perrigo

One of Malta’s best-known journalists, Daphne Caruana Galizia, has died after a bomb exploded in the rented car she was using on Monday. She had worked on the Panama Papers revelations and filed a report to police saying she had received threats just two weeks earlier.

Her death has elicited widespread condemnation around the world. Here’s what to know:

Daphne Caruana Galizia, 53, was an investigative journalist who specialized in covering corruption in the Mediterranean nation of Malta, and had worked extensively on the 2016 Panama Papers revelations.

Caruana Galizia was considered a thorn in the side of her country’s government. Her work exposed the links between Malta and offshore tax havens, and her blog, Running Commentary, was one of Malta’s most popular websites.

In one strand of her investigations she reported that Prime Minister Joseph Muscat’s wife and a number of his political allies had disguised shell companies in Panama which were linked to income from Azerbaijan. Muscat and his wife denied the allegations.

Caruana Galizia had just begun to drive away from her home near Mosta, on Malta’s main island, when a bomb exploded in the rented car she was using. Photos from the scene showed the wreckage of the Peugeot strewn by the blast well into a roadside field. She had filed a police report saying she had received threats just two weeks before her death.

She was alone in the car, and had posted her last blog post minutes before she left the house. Her son was the first to arrive at the scene after hearing the explosion.

What are the Panama Papers?

The Panama Papers were a leak of data from the Panamanian law firm Mossack Fonseca, which first made headlines in April 2016 after a coalition of newspapers led by the German Süddeutsche Zeitung broke the story in unison. The trove of 11.5 million documents revealed the scale of the use of offshore holdings by rich and powerful people around the world. Offshore business holdings in tax havens like Panama are a way to disguise the ownership of assets whilst making use of relaxed foreign tax laws.

The Panama Papers revelations played a role in the downfall of Pakistani Prime Minister Nawaz Sharif and Icelandic Prime Minister Sigmundur Davíð Gunnlaugsson among others.

The International Consortium of Investigative Journalists (ICIJ), the group that coordinated the Panama Papers reporting, condemned Caruana Galizia’s murder, adding that it “condemns violence against journalists and is deeply concerned about freedom of the press in Malta.”

Who’s responsible for her murder?

No suspects have yet been identified by police. The victim’s son Matthew Caruana Galizia, who is also a journalist and a member of the ICIJ, blasted Malta’s “mafia state” in a Facebook post after his mother’s murder. “My mother was assassinated because she stood between the rule of law and those who sought to violate it, like many strong journalists,” he wrote.

“When there is blood and fire all around you, that’s war. We are a people at war against the state and organised crime, which have become indistinguishable.” He ended his post by accusing the Prime Minister, members of the cabinet and “the long list of police commissioners who took no action” of complicity in his mother’s murder.

How have people reacted?

In a statement, Muscat said Caruana Galizia was “one of my harshest critics, on a political and personal level,” however he denounced her killing as an “unacceptable” and “barbaric attack.”

Wikileaks founder Julian Assange tweeted he was “outraged,” and offered a €20,000 reward for information leading to the conviction of responsible parties.

Herman Grech, the online editor of the Times of Malta, wrote for the BBC: “Daphne Caruana Galizia was loved and resented in equal measure in politically divided Malta – but she will go down in the Mediterranean island’s history as one of the most influential writers.”

Reporters Without Borders said it was “appalled” by her murder and called for a full and independent investigation into her death.

The leader of Malta’s Nationalist party claimed the killing was a “political murder”. “What happened today is not an ordinary killing. It is a consequence of the total collapse of the rule of law which has been going on for the past four years,” he said in a statement.

On the streets of Malta, hundreds of people attended an evening vigil in Caruana Galizia’s memory. 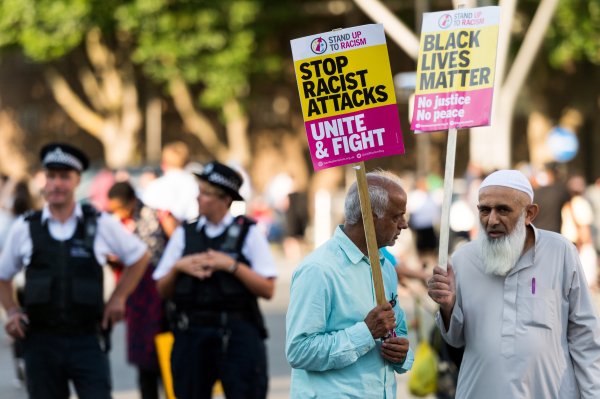 Hate Crimes Soared in Parts of the U.K. After Brexit
Next Up: Editor's Pick