With the bazooka’s cold gunmetal nestling between her yellow felt jacket and coiffured black bob, Mrs Zhao sizes up the ranks of an imaginary enemy and squeezes off a few rounds, causing explosions of red and yellow pixels to flare on the LCD screen opposite.

“It’s pretty easy,” she grins, examining a photo taken on the cellphone of a friendly passer-by. “The soldiers are hard to hit but I destroyed a lot of tanks.”

Gun-toting grandmas immersed in war-simulation video games are just one part of the Five Years On exhibition currently underway at Beijing’s National Exhibition Hall — a cavernous, Soviet-style expo center. It’s a celebration of Chinese President Xi Jinping’s first term, and is being staged just as he prepares to secure another at the 19th Congress of the Chinese Communist Party (CPP), which kicks off Wednesday.

The show is a a testament to the burgeoning cult of personality that has enveloped “Uncle Xi” over the last five years. Photographs show the 64-year-old sharing peanuts with ethnic minority villagers, caressing the trunk of a baby elephant, and hobnobbing with world leaders. China’s state of the art satellites, tractors, drones and high-speed rail are exalted along the blue-carpeted hallways. The displays build a picture of a dazzling utopia, intoxicating enough to even distract visitors from the polluted reality outside.

“This exhibition is so inspiring, so warm,” says a Mrs Wang, 57, a retired party official who visited on a tour arranged by her neighborhood committee. “It also reminds me the hardships we have overcome. Chinese people’s lives are getting better and better, thanks to Chairman Xi.”

Since taking office, Xi has forced through a sweeping anticorruption drive that has, according to officials, punished 1.34 million low-ranking officials. He has expanded Beijing’s role globally, becoming the first Chinese leader to address the World Economic Forum in Davos, and launching an ambitious plan to boost regional trade and infrastructure through a rekindling of the ancient Silk Road.

All of this is detailed in Five Years On, though the other legacy of Xi’s first term is conspicuously absent. Dissent has been ruthlessly quashed, lawyers and activists jailed, and opponents within and without the party purged. For a leader once derided as an uninspiring “princeling,” Xi is now a strongman the likes of which haven’t been seen since Mao Zedong. At Wednesday’s Congress, Xi is poised to promote allies and further centralize power to rival even the “Great Helmsman” himself.

“I don’t think Xi Jinping has ambitions to go beyond Mao,” says Prof. Steve Tsang, Director of the SOAS China Institute at the University of London. “But I don’t think his ambitions are any less than being treated like Mao.”

As the Congress nears, Chinese society has become deluged with brazen propaganda like that of the exhibition. Billboards that once hawked iPhones and Nike sneakers now trumpet China’s achievements in science and technology, while newspapers and television shows are filled with paeans to Xi. Meanwhile, even the most innocuous criticism or potential embarrassment has been scrubbed out. The Chinese characters for Winnie the Pooh — an affectionate nickname for Xi — are now forbidden on China’s popular Wechat messaging app, along with any comic memes depicting the strongman.

Officials, businessmen and academics meanwhile shrug off interview requests for fear of being associated with critical coverage of Xi. The use of VPNs — computer networks that allow determined netizens in China to access content beyond the Great Firewall — have ground to a halt.

One hotel in the southern city of Shenzhen was even reportedly fined for accepting a guest from Xinjiang — merely coming from China’s insurgency-wracked westernmost province now apparently presents a security risk. In a similar vein, AirBnB has been forced to remove all Beijing listings over the Congress. Fancy a hot air balloon ride? Bad luck, they are also banned.

The combination of tightening societal controls and burgeoning cult of personality is a worry for China-watchers, even if many Chinese expect — or hope — the current crackdown is only temporary. For now, most visitors to Five Years On are happy to focus on the positive.

“The exhibition is terrific, very uplifting,” says a Mr Ma, 37. “I am impressed by the high speed rail, nuclear plants, space technology, and other infrastructure projects. Without a strong government, we couldn’t have achieved these.” 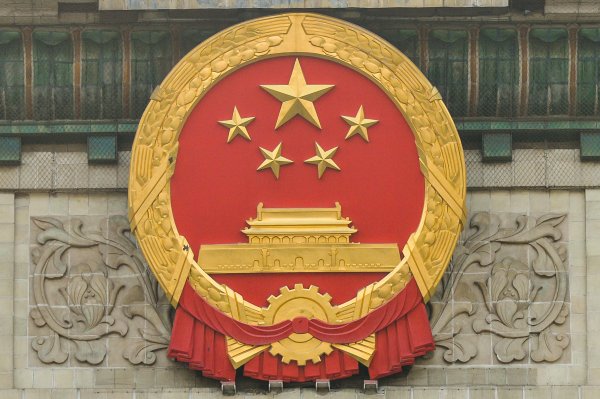 What to Know About China’s Biggest Political Shakeup in Years
Next Up: Editor's Pick