Successful, white and with a public platform to share their experiences is the profile of most of Harvey Weinstein’s accusers. The voices of Rose McGowan, Mira Sorvino, Gwyneth Paltrow and many other brave women who spoke out against Weinstein last week were without a doubt powerful, and will hopefully change how instances of sexual harassment and gender-based discrimination are dealt with in Hollywood and other industries. But for women living in a paycheck to paycheck economy, warring against the machine of sexual harassment not only comes with humiliation, fear and angst, but also with the added bonus of possibly leaving them economically destitute.

Sex discrimination comprises nearly 30% of the charges filed with the Equal Employment Opportunity Commission in the United States, and approximately 75% of people who experience sexual harassment do not report it. Beyond the U.S. borders, the United Nations reports that 40% to 50% of women in the European Union experience sexual harassment at the workplace on some level. To categorize this is a problem is an understatement; but as an attorney who represents individuals who deal with harassment every day, I’m sadly not shocked by these statistics or Weinstein’s actions.

In a recent case of mine, the facts were fairly straightforward. A female food server, paying her way through school, was invited out by a supervisor to discuss a possible promotion. Minutes into their meeting he forced a kiss, groped her breast and pulled her neck towards his lap. She resisted, and he cut her hours. When she walked into my office approximately six weeks later, she was already homeless, due to the dramatic decrease in wages and wanted to know if she had a case.

Her story is very familiar to me. I have a file closet with hundreds of clients just like her who have a single voice, know what happened to them is wrong and just want to work in peace. There is an overrepresentation of minority and low wage employees as complainants of sexual harassment at work due to the predatory nature of these encounters. Keep in mind, sexual harassment is about power, not sex.

As an attorney, the first thing I need to know is what type of harassment my client has experienced. Was it a single severe incident or has there been pervasive acts over a period of time making it a hostile work environment? Or, was it a request for sexual favors in exchange for work, continued employment or a promotion making it quid pro quo. Though in this case it was her supervisor, you can be sexually harassed by a co-worker, an interviewer for a job or a client. As long as it’s an unwelcome comment, touch or romantic advance — it can be considered sexual harassment by the law. And your most powerful tool in fighting back is speaking up.

In this instance, my prospective client had pushed her aggressor away. This puts the other person on notice that you don’t want to be touched, spoken to or treated in that manner. You don’t have to forcefully fend off the tormentor. Even subtleties in your reaction can be considered objecting, and include, walking away, tensing up your body or pulling back. If, in the moment, you didn’t object, you can still file a complaint at a later date in order to make clear that those acts were unwelcome. Silence and abuse are cohorts, and not speaking up perpetuates the environment for sexual harassment to continue. No matter the sense of powerlessness that may exist in the dynamic, by shedding light on what is happening, you are that much closer to ending it.

Complaints can be made to other supervisors, a human resources representative, a business owner, complaint hotline or any other designee noted in your employee handbook, website or employment poster. Whenever possible, these complaints should be delivered in writing in a verifiable form such as an email, facsimile or certified mail. Even verbal complaints should be followed up in writing — this way the existence of the complaint cannot be denied.

Once a complaint is made, the company should do an investigation into the allegations. You must cooperate. Be sure to include any and all incidents of sexual harassment. The company will likely question the harasser and any other witnesses. At the conclusion of the inquiry, you should be notified of the result. If the claim is substantiated, the accused should be punished and the company should take steps to assure that this will not happen again. For example, there may be a transfer (for either or both of you) to another location or a suspension. If the complaint is not substantiated, steps should still be taken to make sure that you’re not retaliated against.

The law can be tricky about what it considers a “reasonable” response by a company to a complaint of sexual harassment. So, if your complaint goes unanswered or you are otherwise unsatisfied with the company’s actions, you can file a charge of discrimination with the EEOC, which is free to you. In most cases these agencies will conduct their own investigation. If they find cause to believe that a violation of law has occurred, they can take action against the company. There are also resources that are available to help.

Even for the privileged women of Hollywood, speaking up against harassment is never easy. But when your entire livelihood is on the line, it can be even more difficult to navigate, especially in a way that preserves your ability to provide for yourself and your family. But regardless of personal circumstances, using your voice to confront sexual harassers not only liberates you, but everyone who is watching.

Marjorie Mesidor is a partner at Phillips & Associates, PLLC, a premier New York and New Jersey plaintiff-side employment discrimination firm, representing sexual harassment complainants. She is a former WPIX guest legal correspondent and advocate for workplace equality. Ms. Mesidor is also a member of the NYU Labor Center Advisory Board. 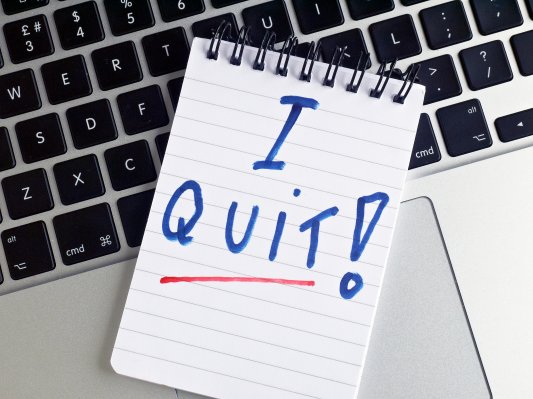 4 Things to Consider Before Quitting Your Job
Next Up: Editor's Pick