Few rappers cast as wide a shadow over the NBA as Lil B, a rapper and prophet for the age of the Internet. Lil B, born Brandon McCartney, burst into public consciousness over a decade ago out of the Bay Area, turning a viral following into praise from stars such as Kendrick Lamar and Chance the Rapper. In the time since, he’s become just as known for his outlandish raps as he has for his alter ego, The Based God, a Twitter-happy deity who promotes positivity and love — that is, when he isn’t putting curses on NBA players who diss his music or steal his dance moves.

For the uninitiated, Lil B is not your casual celebrity basketball fan sitting courtside for the look. No, Lil B takes basketball so seriously that he tried out for the Santa Cruz Warriors, the D-League team affiliated with his beloved Golden State Warriors. He even lifted past curses on players like Kevin Durant and James Harden for the good of the league. And there are few other rapper-Twitter deities who talk about the NBA week after week on ESPN.

Ahead of the start of the NBA season, TIME talked to Lil B about The Based God, curses, and who he thinks will take home the title this season.

TIME: NBA season is here and you love the Golden State Warriors — what are you looking forward to seeing from them this season?

Lil B: I’m really excited to see more teamwork on the Warriors part, just to see them play their game. They’ve got some good competition this year; I’m excited how the NBA restructured everything to play against the Warriors. Things are looking upward and just fun for sports in general. You can see sports and entertainment on the uprise.

Sports have been in the news with NFL players kneeling during the anthem to protest police brutality and racial inequality. Do you think that’s something we’ll see in the NBA this season?

It depends on the individual players and how they want to go about things and it depends on contractually whether or not they can or if they can’t. It will be interesting to see what players stand or sit; however it goes.

Do you support people taking a knee to protest police brutality and racial inequality like Colin Kaepernick?

I think it depends what they’re doing it for. At the end of the day, if someone wants to do that, they should do that, especially as Americans. I’ll stand for the anthem, I don’t have a problem standing for it.

Let’s talk about your curses on NBA players. Why do you curse people? These curses might be very powerful, you know.

Thank you. I give it to The Based God who really informs me and gives me that gut instinct and the power to say who’s cursed or not. It just comes from a pure place, just trying to bring peace and positivity and love and also awareness.

So curses always come from a very positive place.

I think your most famous curse was the one you gave to KD in 2011 after he said less than kind things about your music, but you lifted the curse when he joined the Warriors last year. You also lifted a curse on James Harden, who had stolen your dance move, “the cooking dance.” Why did you choose to pardon both these curses?

Everything comes in time. The compromise of the curse was KD coming to the Warriors, which was a big turn of events. It was very exciting, so in words from The Based God, it was only right that the curse was lifted off Kevin Durant and the year that it was lifted, he and they got a championship.

James Harden’s curse has been lifted. There’s no one currently in the NBA who’s cursed.

But I saw that The Based God recently cursed Kenyon Martin, who’s a retired NBA player, for his comments about Jeremy Lin’s decision to get dreadlocks.

Kenyon Martin was temporarily cursed, but after he apologized to Jeremy Lin, the curse was lifted.

So curses always come from a very positive place.

Does The Based God curse anyone who’s not an NBA player?

Yeah, it definitely spans outside of sports. Right now, I’ve been keeping it sports-related because that’s where the curses originated, in the sports entertainment world. But the curses definitely go out to everyone from the individual to the corporation.

There were a lot of shake-ups in the league during the off-season. What did you think of the Cavs trade?

I like the Cavs team. I think it’s really cool that they have Dwyane Wade and Derrick Rose now with LeBron James, Iman Shumpert. It’ll be fun to see how they go against the Warriors, but like I said earlier, the Warriors are very confident, they know how to play in adversity and they know how to win. I’m excited to see what goes on.

Do you think the Warriors will take the West again?

Oh, I’m very confident, but at the end of the day, we have to let these guys play ball. Neither me nor The Based God gets involved with regular season play. We leave it all up to those guys, we just do what we do.

What about the Finals? Do you have any thoughts about who’s going to win this year?

I mean, I definitely have my predictions, but I think I’ll keep that to myself until a special time.

If you could make a dream starting lineup of current NBA players, who would you pick and why?

Damian Lillard, I definitely respect his game and think he’s someone that’s really cool. I would have to put Russell Westbrook, another exciting player who’s really explosive. I would have to put Boogie [DeMarcus] Cousins, he’s a big, fun guy. Dominique Wilkins [note: Wilkins is not currently in the NBA, but one does not correct The Based God.] And I really like Dwight Howard.

As a rapper who’s a big NBA fan, do you ever listen to NBA players who are aspiring rappers, like Lonzo Ball or Damian Lillard?

I really like Damian Lillard, I like Iman Shumpert’s raps, Stephen Jackson, Allen Iverson and Kobe Bryant. Those are my favorite ones. I like Lonzo Ball, don’t know about him as a rapper yet, but I know he’s cool. 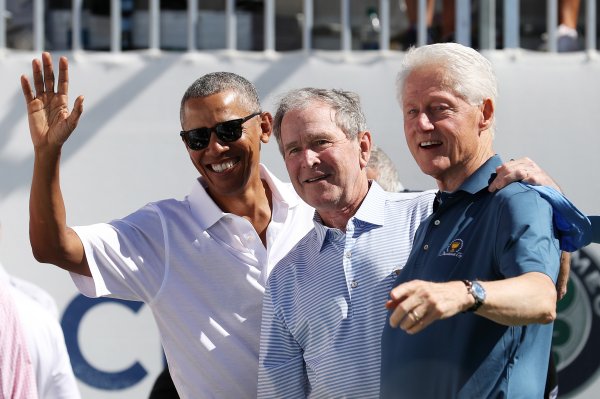 All Three Former Presidents Hit a Golf Tournament Together
Next Up: Editor's Pick