In the dead of night, late last month, the enormous portrait of Communist China’s founder Mao Zedong that hangs over Beijing’s Forbidden City was replaced. A yellow crane stealthily swapped his towering visage with a near-identical, though fresher, replica. One could forgive the “Great Helmsman” for wanting to look his best at this time. Because, on Wednesday, just across the vast stone plain of Tiananmen Square upon which he gazes, China’s current “core leader,” President Xi Jinping, is poised to elevate himself to a standing not seen since Mao left the political stage.

While China doesn’t have democratic elections like those of the West, its ruling Chinese Communist Party (CCP) has elaborate protocols for filling leadership positions, with the next five-yearly shake-up beginning Oct. 18. The 19th Congress of the CCP will see some 2,000 delegates gather in Beijing’s Great Hall of the People, where they will select a 200-member Central Committee, as well as a roughly 25-member Politburo. But the key decision-making body is the apex Politburo Standing Committee (PSC), which typically numbers between five and nine of China’s most powerful figures.

Of course, most of the key decisions have been made in the shadows prior to this political gathering. Nevertheless, there will be various factions vying to advance their own agendas, and whichever one wins will have a huge effect on the health of the world’s second biggest economy over the next half-decade and beyond. Xi, of course, will be central to it all.

This is what you need to know:

What are we looking for?

There’s no doubt that Xi Jinping will be confirmed in his second five-year term as CCP General Secretary, and thus also as president. The real question is who will join him on the PSC. There are rumors that Xi may chose a smaller PSC of five stacked with loyalists, though that may cause resentment elsewhere in the party. Most expect Xi to continue with the current seven-member committee, but perhaps with a couple of ardent supporters to bolster his position. If he does go to five, says Kerry Brown, Professor of Chinese Studies at King’s College London, “Then we are looking into the eyes of a real autocrat.”

Isn’t this all scripted anyway?

Mostly, though there could be curveballs. Although the written rules governing the CCP’s distribution of power are loose, there are various conventions. One is that top officials aged 68 or older must retire. But Xi’s key ally, Wang Qishan, who heads the government’s sweeping anti-corruption purge, is 69. Xi might break with the age protocol to keep Wang on the PSC. But doing so would gnaw away at the institutionalization that staves off accusations of outright dictatorship, not to mention irk younger cadres who would see their own promotion chances shrink. There are rumors that Xi could even perform a double-whammy of replacing Premier Li Keqiang with Wang, who could help to push through his economic reform agenda. But what Xi wants to do, versus what he feels he can get away with, is tempered by political expedience of these moves, as well as external factors, such as suggestions that Wang’s health may be fading. “Xi Jinping has needed Wang Qishan up to this point to keep the party in line,” says Prof. Steve Tsang, Director of the SOAS China Institute at the University of London. “If Xi Jinping does not feel confident enough to let him go, then breaking the retirement rule would be a price worth paying.”

Who are the cadres to watch?

According to the age-limit convention, five of the seven PSC members are due to be replaced. The most attention will be on any younger additions, as tradition dictates that at this “mid-term” Congress two or three candidates capable of remaining in the PSC for the next three Congress — so in their early-50s — are blooded. These include the heirs apparent, who will assume the General Secretary and Premier roles at the leadership changeover at the 20th Congress in 2023. (At the 17th Congress in 2007, Xi and Li were promoted to the PSC). The most common name touted is Hu Chunhua, party chief of Guangdong province, who was promoted to the Politburo in 2012. Sun Zhengcai, who served as the party secretary of the central megacity of Chongqing, was another top pick until his purge last month. His replacement in Chongqing is Chen Min’er, 56, formerly party chief of the southwestern province of Guizhou. Chen, a long-standing Xi confidante, was odds on to be named to the 25-strong Politburo, but due to Sun’s fall could move straight into the PSC. “Sun had not openly, publicly, strongly articulated his support for Xi,” says Tsang. “He just paid it lip service. And [his removal] sends a very clear signal for insiders: ‘you are with us, or you are against us.’”

What does it mean for China?

How the 19th Congress plays out will influence how far Xi can roll out his reform agenda. His first term was mostly occupied with political reform — the anti-corruption campaign, which the nation’s anti-graft watchdog says has punished 1.34 million lower-ranking officials — and foreign policy matters. These include expanding claims in the South China Sea and building up China’s global presence through his Belt and Road Initiative: a rekindling of the ancient Silk Road via a trade and infrastructure network across Eurasia and Africa. But further economic liberalization is needed to propel China forward and avoid the dreaded “middle-income trap” that oft blights newly developed economies. That means reducing the reliance on unwieldy state-owned enterprises, which suffer overcapacity and are the source of many of China’s environmental woes. However, such enterprises have proven a main instrument of growth over the last few decades, and helped China weather the worst ravages of the 2008 global economic crisis. As such, many key figures remain resistant, particularly those in the camp of Premier Li. “The fundamental policy issue is the role of the market,” says Brown. “The key thing to note when these new leaders walk out is whether they are supportive of marketization or against.”

What does it mean for the world?

So far, Xi has maintained a very strong role for the CCP and for state-owned companies in the economy. There’s been some progress for foreign investment, but investors would like to see state-dominated sectors opened to private business, the privatization of smaller state enterprises and the revamping how larger ones are run, plus more foreign competition particularly across the heavily protected service sector. “What’s interesting will be whether we see a definitive move in one direction or another,” says Nicholas Consonery, head of Asia geopolitical intelligence at FTI Consulting business advisory firm. Xi has also sought to shore up his personal position by appealing to nationalist domestic policies. However, these chafe against what he is trying to achieve internationally, especially building good will for his Belt and Road Initiative. It’s possible that a stronger Xi may throttle back on his administration’s nationalist excesses, allowing it to capitalize on geopolitical goals. Much will depend, though, on whether Xi is able to push through much-needed reforms of China’s bloated armed forces.

What about Xi personally?

In 2016, Xi won official recognition as the party’s “core” leader and “supreme commander” of the national armed forces, placing him on a level with Mao Zedong and Deng Xiaoping. The next rung would be the enshrining of his personal political philosophy in the national constitution, as “Xi Jinping thought.” Only Mao has previously had this honor bestowed. (“Deng Xiaoping ‘theory,’” considered a lesser nod, has been included, while Jiang Zemin and Hu Jintao both had their trademark philosophies added but without their names attached at all.) What “Xi Jinping thought” actually means is its own huge question. However, the key takeaway is that the stronger Xi is personally the easier he can push through reforms necessary for the health of the nation and, by extension, the party as its fundamental organ of government. “There are so many administrative reforms needed to make this ‘China Dream’ happen for the middle class, where there’s going to be big discontent if these things are not delivered,” says Brown. “If the middle class walk then that’s not something [the CPP] can survive.”

There are persistent rumors that Xi is angling to stay on past his ten-year term, and as such may not appoint any young “groomed” leaders to the PSC. This would be a massive departure from protocol, prompting accusations of a lurch toward outright dictatorship, and damage the CPP’s claims of institutionalization. Much depends on how Xi — and China — performs over the next five years. A series of crises amid a worsening economic outlook would render such a gambit impossible. But if Xi can implement reform and steady the ship then it might not be so farfetched. “Xi’s an ambitious man who sees great value in himself,” says Tsang. “He’s almost certainly planning to stay on past ten years, but the question is: How?” 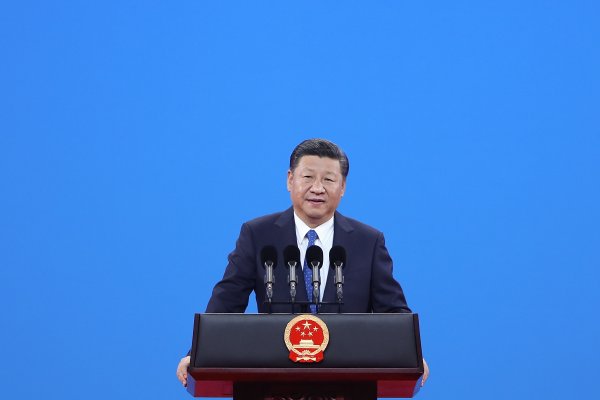