SNL Transforms Kellyanne Conway Into Killer Clown From It

On Saturday’s episode, McKinnon’s Conway doubled as Pennywise the clown from It, attempting to lure CNN’s Anderson Cooper, played by cast member Alex Moffat, into the sewer as she aims to return to his show to comment on the Trump administration’s latest moves.

Similar to the terrorizing clown from Stephen King’s thriller that returned to theaters this summer, Conway donned white foundation and red lipstick that traced up her cheeks. (As for her usual look, McKinnon’s Conway says this one “toned it down.”)

The sketch follows Moffat’s Cooper — wearing a yellow raincoat like It’s Georgie — as it pours rain outside of CNN’s building. Accidentally dropping his piece of paper on the street, he follows it down to the sewer, where Conway — dubbed as “Kellywise” in the skit — waits for him.

Kellywise first presents Cooper’s two fears — headlines in the New York Times reading “Trump Re-Elected” and “Anderson Cooper Fat Now” — in an attempt to have him bring her back to his show. She then tries to entice him with something that will lure him in more — Hillary Clinton.

McKinnon, who then reprised her role as Clinotn, offers Cooper her book What Happened. As he reaches for the book, Kellywise returns, chomping down on his hand, ripping off his arm and pulling him down into the storm drain.

Watch the full skit above. 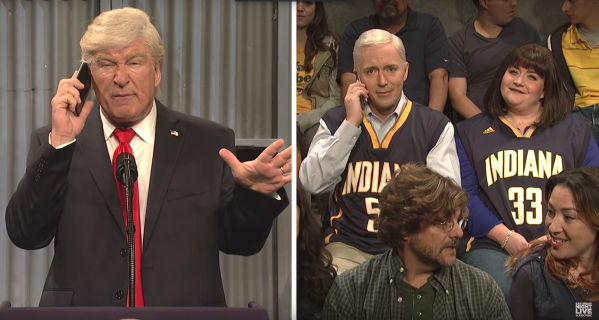 Watch Alec Baldwin Take on Trump’s Spat With the NFL on SNL
Next Up: Editor's Pick