On Thursday, following a week of revelations that Harvey Weinstein has been the subject of decades of accusations of sexual misconduct and abuse, Emma Thompson told the BBC that she believes the abuse of women by powerful men is “endemic to the system” in Hollywood, due in part to the gender imbalance in the industry.

That system is the product of about a century of economic, business and media history. And, while Hollywood is certainly not the only industry in which those dynamics were in play over the course of the 20th century, it provides a stark window into how those elements can create a toxic culture.

“The idea of promising a role or promoting you for sexual favors is as old as the oldest Hollywood plot,” as Cari Beauchamp, author of Without Lying Down: Frances Marion and the Powerful Women of Early Hollywood and several other books of Hollywood history. However, Beauchamp adds, the power dynamics that allow someone to get away with that kind of quid pro quo are the product of a specific moment in time.

Hollywood in its very early days was not in fact the kind of place in which the infamous “casting couch” culture could flourish the way it later would. Women (like Frances Marion) flourished in early Hollywood and often held positions of great influence in what was then a scrappy, highly diffuse industry. With hundreds of tiny companies experimenting in a new medium, there was lots of room for people who would not otherwise have advanced in more traditional businesses—like women.

With the invention of “talkies” and the onset of the Great Depression, the business of films changed. As more expensive movies became financed by bankers, women filmmakers had trouble securing the funding they needed to compete. Small companies went out of business and those that remained grew. The major studios started to consolidate power and profits. And, as has happened in any number of fields (for example, computer programming) money and respect made the jobs more appealing to men. Pretty soon Hollywood’s behind-the-scenes world became one run by men who held unprecedented sway over the careers of everyone else.

“The studio heads come in in the 1920s and concentrate on building their companies,” says Beauchamp. “By the 1930s they’ve built their kingdoms. They were kings of the castles and with the crown comes entitlement, they think.”

And the studios were in fact kingdoms of a sort, with a studio head sitting at the top. The huge lots on which movies were made even had their own police departments. “These are little cities,” she says, “and they’re not that little.”

With studio heads wielding so much power in an industry in which men made almost all of the decisions behind the scenes, it was possible for that “casting couch” culture, of expecting sex in exchange for career advancement, to develop. And, Beauchamp adds, it was also possible for a tradition of objectifying female characters to develop alongside it, as women disappeared from the writer’s room and the director’s chair.

“The men in power realized they could use their position for sexual gain in addition to financial,” adds Alicia Malone, author of Backwards and in Heels: The Past, Present And Future Of Women Working In Film. “Not all of course; there were great men who didn’t do this. But some did and it has continued up until today.”

Though not every one of the major studio heads of that era is the subject of such rumors, there are plenty to go around.

A powerful producer is said to have exposed himself to Shirley Temple when she was just a child. Joan Collins has said that she didn’t get the lead in Cleopatra specifically because she refused to sleep with the studio head in a blatant quid pro quo for the part. Rita Hayworth’s husband Eddie Judson reportedly offered other powerful men his wife’s sexual favors, but when she refused to sleep with studio head Harry Cohn, he used it against her, according to Malone.

One story Beauchamp highlights is the tale of the then-ingénue Jean Howard, whose interactions with studio head Louis B. Mayer have been framed rather sweetly as him being hopelessly and unrequitedly in love with her. Viewed today, the tale can be framed less wholesomely: she was young and just beginning her career; he was decades older and a powerful (and married) man who had the near-complete ability to dictate how that career went. When she refused his advances he reportedly threatened to kill himself. When she decided to marry the agent Charlie Feldman, Mayer hired a private detective to follow them and then told his associates to stop doing business with the agent in an attempt to shut down Feldman’s career in revenge.

Crucially, these stories, while they would trickle out decades later in tell-all star biographies and memoirs in the late 20th century, were largely unknown outside the bounds of Hollywood.

Just as the business was consolidating in the 1930s, so was the media that covered the movies. Thanks to a combination of racy movies and real-life scandals like the Fatty Arbuckle trials, Hollywood had been getting a bad reputation with the public. So, in this period, Hollywood used the Hays Code to voluntarily crack down on its own morality, imposing strict limits on what could be said or seen on screen. But, Beauchamp notes, the code can also been seen as a wall between the public and the shadier side of Hollywood. Will Hays, after whom the code was named, is sometimes portrayed as a censor, but she explains that he’s more accurately seen as a lobbyist deployed by the movie studios to convince the rest of the world that Hollywood was morally pure.

Between the Hays Code and the tight control the studios had over the pre-Internet media, the behavior of those movie moguls — which would not have been allowed to be depicted on-screen — didn’t have to impact the box office.

“The public only knew what they saw on screen and what the studio told them,” as Malone puts it.

It was not until the 1970s, Malone says, that things began to change for women in Hollywood. Though they had continued to make art and experimental cinema in the mid-20th century, the business of commercial movies remained basically out of bounds to them, just as other American executive suites were largely male.

A number of factors — such as the end of that consolidated version of the studio system, the rise of television, the fall of the Hays Code and the spread of foreign cinema — combined such that, by the end of the 1960s, the kingdoms established by the major studio heads were weakening. While those studios would continue to make movies and wield great economic power, upstart competitors began to wiggle their way in. And, in the opposite trend from what was seen in the ‘20s and ‘30s, that meant women could come in too. Combined with the strides made by feminism across the nation, women began, albeit slowly, to return to decision-making positions in Hollywood.

“That was the same time that women were starting to come into executive positions in all different industries,” Malone says. “The ‘70s is when you start to see women working behind the scenes and the birth of independent cinema.”

While 1980 saw the appointment of the first female head of a major studio, Sherry Lansing, progress has been slow. For 2016, the annual “Celluloid Ceiling” report found that, across the year’s top 250 U.S. films, women held only 17% of the behind-the-scenes Hollywood jobs that the researchers tracked.

But, despite the low number, both Beauchamp and Malone say that some things are changing — and that the Weinstein news is a case in point. Thanks to tools like social media and a hard-to-measure but inescapable cultural shift, it’s easier to bring what happens behind the scenes out into the open.

“Now, actresses have the means to broadcast their statements wide to people. It’s very hard to, of course, and a lot of women fear that, but at least they can,” Malone says. “Behind the scenes there’s still a long way to go.” 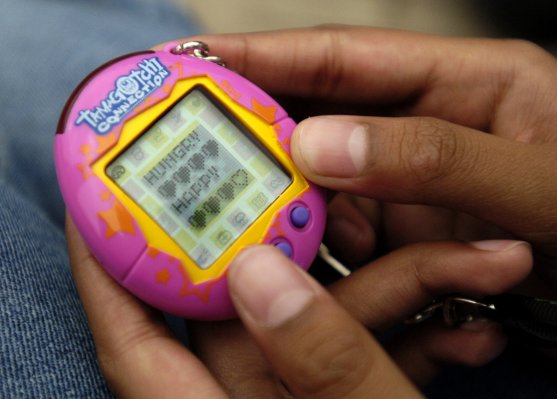 Tamagotchis Are Coming Back So You Can Practice Great Parenting Skills
Next Up: Editor's Pick