Trump actually sat down for a rare interview with Fox News host Sean Hannity, and because there is little chance that the President will sit down with Colbert any time soon, Colbert hijacked Hannity’s interview.

On Thursday night’s episode of The Late Show, Colbert’s graphics team displayed their handiwork, expertly inserting Colbert into Hannity’s interview making it seem that Colbert was interviewing Trump. Colbert wanted to make sure he had the President’s consent for the fake interview, asking: “Is it okay if I manipulate this footage to make you seem like an idiot?” and Trump nodded his agreement.

From there Colbert grilled the President about suggesting an I.Q. contest with Secretary of State Rex Tillerson, the accusations again Harvey Weinstein, and sexual harassment, and whether he could name a state. “Russia,” said Trump.

Then they spoke honestly about their feelings for each other, and Trump gave “Colbert” a nice compliment about his late-night ratings surge. “I’m a ratings guy,” noted Trump. In response, Colbert offered his own honest take on Trump’s presidency: “I think you are a bloated narcissist whose presidency is a knife in the moral heart of America, a wound in our national soul that will take generations to heal, if ever.” 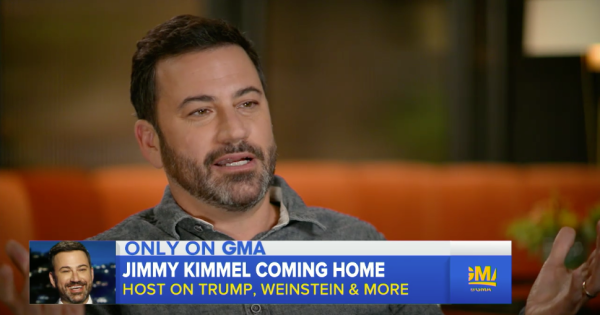 The Real Reason Jimmy Kimmel Wants Donald Trump to Come on His Show
Next Up: Editor's Pick