This Is What a Super Nintendo Plus Magic Looks Like

There’s another Super Nintendo on the block, and this one means business.

Not the lucrative sort Nintendo’s sold out Super NES Classic seems to be doing as availability bulletins circulate like whispers of a ghost. Nor the steady sort Nintendo’s handheld 3DS has been up to for years, dishing up choice SNES downloads by way of its Virtual Console. But business the way an audio engineer means when retooling decades-old tunes for playback on modern audio hardware. Or as a film preservationist does when cleaning and converting acetate film to digital ones and zeroes.

It’s called the Super Nt, plays some of the medium’s most treasured games (like Super Mario World and The Legend of Zelda: A Link to the Past), and judging from the literature its Seattle-based boutique hardware-maker sent over, it’s poised to be a Super Nintendo nonpareil.

“The whole beginning of Analogue and the kind of products we’ve wanted to make is this holy grail, end-all, pedestal sort of thing,” Analogue CEO and founder Christopher Taber tells me during a Skype call from Hong Kong, where the company keeps a second office to monitor its supply chain. “It’s a have every single feature and every single detail you can possibly imagine and make it as good as it can possibly be mindset. You don’t see a lot of products in any category that do that, because obviously that ends up making them very expensive.”

I can vouch for Analogue’s obsession with retro fidelity as well as their products’ sticker shock. Earlier this year I sampled a $449 Analogue Nt mini, the Super Nt’s predecessor and culmination of Analogue’s work reproducing the 8-bit Nintendo Entertainment System. The company’s standards were borderline absurd. It was so devoted to authenticity that its initial efforts involved cannibalizing processors from bona fide NES systems. The company hand-repurposed these to replicate the NES’s functions at chip-level, then cloaked the system in a stylish aluminum enclosure.

It was a lovely thing. But the mathematical inevitability of dwindling resources made scavenging unwieldy, prompting Analogue to pursue something known as a Field Programmable Gate Array, a sort of engineer’s tabula rasa: hardware that can transform itself. Or, if you’re a layperson like me and prefer Clarke’s third law, a level of architectural fastidiousness akin to magic.

Emulators, including Nintendo’s own Super NES Classic, let you play legacy games, but at a cost. Emulation approximates the behavior of hardware, sheathing its virtual circuits in software layers capable of conversing with modern processors. But those abstractions introduce quirks inherent to software, such as latency.

FPGAs by contrast involve physical chips you can instruct to behave like other chips. Instead of emulation, which involves degrees of imprecision, you’re talking about simulation, which brooks none. When games interact with an FPGA’s logic gates and switches, they’re doing so with the same purity of parallelized communication you’d expect from the original hardware.

The upshot of Analogue’s FPGA adventurism was the Nt mini, a device I called “paradoxically both pliable and purist.” Pliable because it also bundled a suite of post-processing tools that let you fiddle the audiovisual output in all sorts of fascinating ways — a preservationist’s fantasy rolled into a tweaker’s Shangri-La.

“We spent a long time researching and developing the basic internal structure for an FPGA-based video game system,” explains Taber. “There’s not a lot of people out there who’ve developed and worked on FPGA implementations of 16-bit systems. It’s all kind of people dabbling as a hobby, implementing certain pieces of it. But nobody who completes it. What we’re doing is totally proprietary. And we’re a small company, so that’s involved an enormous amount of time, effort and money.”

FPGA remains the foundation of the Super Nt, a device Analogue describes as “a reimagining of perhaps the greatest video game system of all time.” Not just the Super Nintendo, either, but its Japanese equivalent, the Super Famicom. Analogue says the Super Nt supports all of both systems’ more than 2,200 games as well as their original accessories.

Want to plug in a Super Game Boy sleeve to play original Game Boy cartridges? Waggle an SNES mouse to swat flies in Mario Paint? Play SNES games like Marvelous: Mōhitotsu no Takarajima or Mario & Wario that never made it stateside? The only thing you probably won’t be able to do is heft a Super Scope, the bazooka-styled light gun that let players smash blocks in Blastris or velvety varmints in Mole Patrol: the Super Nt fully supports the Super Scope, mind you, but you’ll need a CRT television to get the device’s “hit detection” to work.

As you’d expect, reverse-engineering the Super NES’s circuitry was a vastly more complex endeavor than mapping the original NES’s. “The difference is absolutely exponential implementing a 16-bit versus an 8-bit system into FPGA,” says Taber. “It’s on the meta level compared to an 8-bit system. The way the chips are interfacing with each other in the Super Nintendo, it’s like an amplification from the NES multiplied by a factor of 10.”

Taber thus calls the Super Nt his company’s “magnum opus,” and “the culmination of the last seven years.” But hold onto your hats, because instead of debuting with a premium price in line with its last two systems, Taber says Analogue will sell the Super Nt for $189. That’s hundreds of dollars less than the Analogue Nt mini, and not much more than the figures scalpers have been landing for Nintendo’s Super NES Classic.

Thank Analogue’s pivot from an anodized fully aluminum body to the Super Nt’s variably colored plastic enclosures: black, classic SNES gray and purple, Super Famicom grayscale with rainbow face buttons, or transparent. “With aluminum, it’s not just the materials, it’s the quality control that goes into it,” says Taber. “It’s also the almost unreasonable level of effort that we put into ensuring every unit is absolutely perfect. Every single Nt mini and every single original Nt, I personally checked through the manufacturing process for defects. For the original Nt, I personally assembled each and every one.”

Plastic makes things more cost-effective, but Taber says the material tradeoff yielded other perks. “It’s almost more interesting, because when we come from such an obsessively high quality perspective to a category of material like plastics, we end up doing things different from others,” he says. “We always over-engineer everything, so the Super Nt is built like a tank, because we’re using higher quality plastics. Even the colors, they’re not just four different colors, they’re actually multiple different colors of plastic, multiple different materials of plastic, all the way from the inside to the outside. Every single piece of the product is matched to the motif.”

Pull the Super Nt out of the box and you get the system itself — about 5 inches long by 6.5 inches wide by 1.5 inches high, or not much bigger than the pint-sized Super NES Classic itself — an HDMI cable for up to 1080p output, a USB cable and USB power supply. Like the Analogue Nt mini, audio outputs at 48KHz, 16-bit stereo. There’s an SD card slot for firmware updates, and the system also supports a range of post-processing features so you can tinker with the audiovisuals. You’ll have to provide your own controllers, but as with its NES systems, Analogue has partnered with retro gamepad maker 8bitdo, who’ll offer color-matched, wireless, lag-free SNES gamepads.

Uncompromising quality control can’t change the fact that the original Super Nintendo was designed long before fixed pixel flatscreens supplanted tube TVs with electron guns. A reference quality game system can replicate the internal processes that crunch game code, but what you’re observing on modern 1080p or 4K sets will never look exactly as it did piped through coaxial or composite or S-video or component cables to curved-screens at 256-by-224 pixels. You can apply retro filters like the Super NES Classic’s scan lines that fuzz the graphics, but nothing that perfectly captures the experience of playing a Super Nintendo with cruder cabling on a tube TV more than two decades ago.

I tell Taber about my chat with Sony’s global sales chief Jim Ryan this summer, whose comments about the complications and visual paradoxes of revisiting older PlayStation games prompted some to accuse Sony of tone-deafness. Most seemed to read Ryan’s comments as an indictment of all eras, when he was really speaking of one. When I explain this to Taber, he agrees that gaming’s transition from 2D to rudimentary 3D doesn’t translate as harmoniously as, say, an 8-bit 2D game like Super Mario Bros., or more modern 3D games past a certain point.

“I think that when you get into the post-SNES polygonal early 3D era, some of the stuff just didn’t age well,” says Taber. “Maybe there were design implementations or aesthetics that just don’t look as good in retrospect, and maybe certain eras have more of that than others. Maybe it’s that the source assets are of mixed resolution and so they don’t upscale well across the board.”

Whatever the case, Taber says you won’t have that experience with the Super Nt. “The 2D era doesn’t have those issues. The games should look pristine and crisp and perfect if they’re running the right way,” he says. “The SNES Classic isn’t going to be pristine because it’s running on a little Linux chip, it’s just an emulator. It looks good enough to most people, but it’s not going to look perfect. The Super Nt will look perfect. Audio and video will be the best you’ve ever seen, and even non-enthusiasts are going to be able to see the difference.”

You’ll be able to test that claim soon enough. The Super Nt is available for preorder now, and Taber says the company plans to start shipping systems to buyers sometime next February. 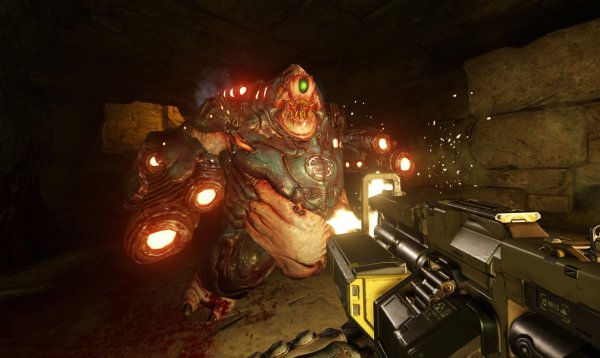 This Is When You Can Play Doom on the Nintendo Switch
Next Up: Editor's Pick