President Trump Is Chipping Away at Obamacare. Here's What He's Doing

President Trump took a major step toward upending the Affordable Care Act on Thursday when he signed an executive order he says will help millions of Americans access more affordable insurance plans.

While the action was treated as a major accomplishment at the White House, the order Trump signed was light on details. In short, it instructs members of his Cabinet to make it easier for consumers to buy short-term insurance plans that don’t comply with all of the Affordable Care Act’s provisions, while also expanding access to plans offered by trade groups and others.

Trump’s actions came after months of stalled progress on repealing the Affordable Care Act, also called Obamacare, despite the fact that Republicans control both chambers of Congress. Repeal legislation has been considered at least three times unsuccessfully since Trump took office, leaving the President publicly seething.

The order’s expansion of so-called “association health plans” follows legislation that has been proposed by Republican lawmakers in the past. In March, the House of Representatives passed a bill that would allow small businesses to haggle with insurers for better plans. The White House wants to allow for a broader interpretation of an existing law, the Employee Retirement Income Security Act, *so groups of employers could offer insurance to workers across the country. In banding together, associations *could be treated like large groups in the marketplace. Large groups are not required to cover some of the essential benefits mandated under Obamacare like maternity care, prescriptions and mental health services, though some offer these protections.

The executive order also asks agencies to give employers more flexibility to use Health Reimbursement Arrangements and offer broader access to short-term health insurance plans, which are typically made available to people between jobs and people who missed the enrollment period. These plans also are not required to offer all of the coverage mandated by the Affordable Care Act.

Kevin Lucia, the Project Director at Georgetown University’s Health Policy Institute, says taken together the three components of the executive order have the potential to undermine the insurance marketplace. That’s because they could push younger and healthier people toward cheaper plans outside of the marketplace, causing premiums to rise for those who choose to stay behind — people who would likely skew older and have more health needs.

“This appears to be a part of a long chain of events that will have the effect of making the individual market less stable,” Lucia tells TIME. “It’s a backdoor way of undermining the Affordable Care Act.”

The administration has already cut funding for advertisements and they’ve reportedly used money that is supposed to help people enroll to fund anti-ACA campaigns. Democrats were particularly critical of the executive order, including Sen. Patty Murray, who is the Ranking Member of the Senate Committee on Health, Education, Labor, and Pensions, or HELP. Murray and the Republican chairman of that committee, Sen. Lamar Alexander, are currently working on a bipartisan plan to fund Obamacare subsidies and stabilize the insurance markets. Their plan could include options that give states more flexibility under the Affordable Care Act, but the negotiations are still ongoing.

“The only way to get results for results for patients and families on health care is to work across the aisle and find common ground,” Murray said on Thursday.

Republican Sen. Rand Paul, who has been a major obstruction to the Congressional efforts despite despising Obamacare, stood behind the president as he signed the order at the White House. The Kentucky Senator said he worked closely with the Trump administration to craft the order, which he said “legalizes choice” for the American consumer in an op-ed for Breitbart. “This lets you get the hell out of the individual market,” Paul told reporters on Thursday afternoon. “We’re going to let people buy what they want.”

Joseph Antos, a health care scholar at the American Enterprise Institute, says that while some consumers may be attracted to the plan, he believes the idea that it will dramatically change the insurance market is an exaggeration. Because Trump is calling on departments to craft the changes, it will set off a regulatory process and likely elicit strong responses from groups that will be impacted.

“All of this can’t be done easily,” Antos says. “What we have here is a political statement that says, ‘we did something.'” 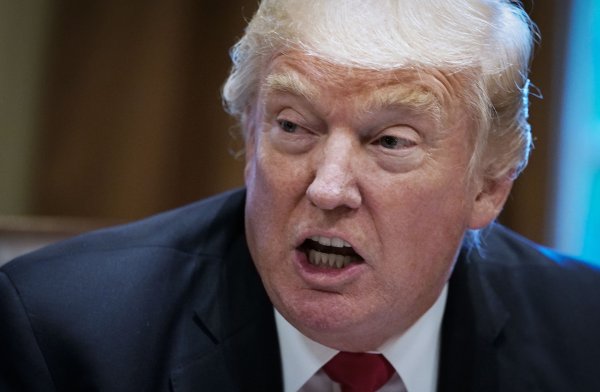