Is Your Kid Hooked on Smartphones? 5 Tips for Parents

There is growing concern among parents, educators and mental health experts that excessive smartphone use may be contributing to the recent surge in adolescent depression and suicide.

But what qualifies as “excessive”? At this point, no one’s sure. Specific, evidence-based guidelines take time to determine—years, and sometimes decades. And the pace at which kids have incorporated mobile devices into their lives has left researchers in the dust.

Still, even at this early stage, some scientists and public health officials are offering advice. Here are five tips from those who have studied kids and technology:

Keep devices out of kids’ bedrooms. There is already strong data linking bedroom screen time with a variety of risks—particularly sleep loss, says David Hill, director of the American Academy of Pediatrics (AAP) Council on Communication and Media. Even among adults, before-bed media use is associated with sleep loss and insomnia. And kids need more sleep than grownups. Hill acknowledges that taking away a child’s phone at bedtime can be a battle, but it’s worth the fight.

Set up online firewalls and data cutoffs. It’s unrealistic to expect young people to stay away from illicit or shocking content, or to moderate their own social media use, says Frances Jensen, chair of neurology at the University of Pennsylvania and author of The Teenage Brain. A young person’s brain is wired for exploration and, to some extent, thrill-seeking—not moderation and restraint. Most devices and Internet providers offer parenting tools that restrict access to illicit content and curb data use, and there are apps that do so as well. Take advantage of them.

Create a device contract. “This is something you create with your child that details rules around their device use,” says Yalda Uhls, an assistant adjunct professor at UCLA and author of Media Moms and Digital Dads. These rules could include no smartphones at the dinner table, or no more than an hour of social media use after school. If a child violates the rules, he or she should lose the phone for a period of time. (How long is up to the parent.) The AAP offers an informative Family Media Plan to help parents get started crafting household rules and restrictions.

Model healthy device behaviors. Just as kids struggle to stay off their phones, so do parents. “We’re all, even adults, drawn to devices,” says UPenn’s Jensen. And if you’re a phone junkie yourself, you can’t expect your kids to be any different, she says. Apart from putting your own phone away while driving, or during meal times, it’s important to recognize that your kids see what you put online. If you’re criticizing another parent on Facebook, or slamming someone’s political beliefs on Twitter, your kids will follow suit.

Consider old-school flip phones for your kids, or a smartphone without a data plan (and therefore no Internet access). This may seem like overkill for some parents—especially those of older teens. But unconnected phones still allow teens to call or text with parents and friends, says Jean Twenge, a professor of psychology at San Diego State University and author of iGen. And kids can access social media or videos from home computers and tablets during their free time. But when they’re out in the world—hanging out with friends, playing sports, or just living their lives—they won’t be tempted with all-the-time access to screen-based distractions. 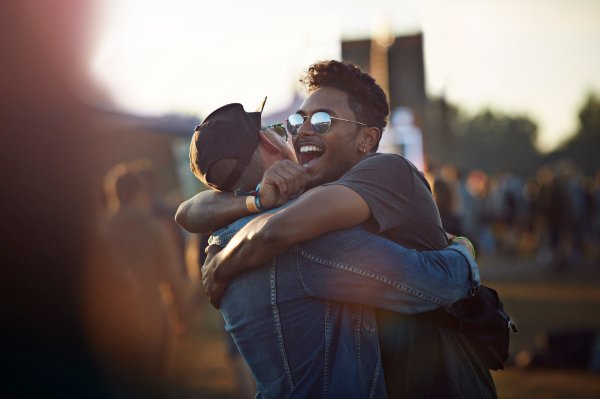 Men Are More Satisfied By ‘Bromances’ Than Their Romantic Relationships, Study Says
Next Up: Editor's Pick