Donald Trump on North Korea: President Obama Should Have Taken Care of It

US President Donald Trump speaks on tax reform inside a hangar at the Harrisburg International Airport on October 11, 2017 in Middletown, Pennsylvania.
Mandel Ngan—AFP/Getty Images
By Tara John

Trump said the NFL should have suspended football player Kaepernick for kneeling during the National Anthem.

“I thought it was terrible,” Trump told Hannity of players taking a knee in protest against police brutality and racial injustice. “And then it got bigger and bigger and started mushrooming. And frankly the NFL should have suspended him for one game, and he would have never done it again.”

He also placed blame on former U.S. President Obama and other past administrations for not doing enough to curb North Korea’s nuclear program.

Trump also doubled down on his attacks of the media.

“Media is bad, they are really dishonest people. These are very, very dishonest people in many cases,” Trump told Hannity, before saying that not all journalists were bad. “When you’re the one being written about, you know if it’s good or bad — and it’s always… they try and make it negative. So the media — I call it fake media. It is fake. So much fake news.” 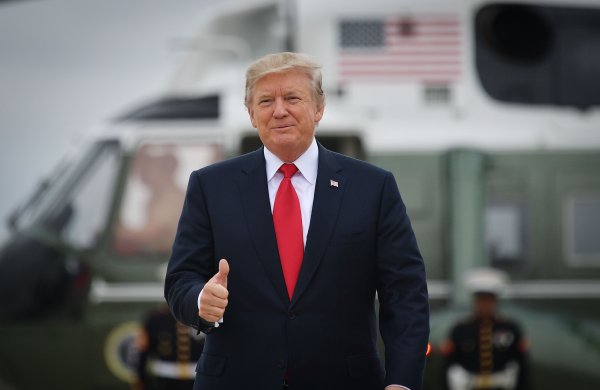 Trump: Network News Could Have Licenses Revoked
Next Up: Editor's Pick