Lisa Hoffman and Dustin Hoffman attend a screening of Netflix's "The Meyerowitz Stories (New and Selected)" at Directors Guild Of America on Oct. 11, 2017 in Los Angeles.
Michael Tullberg—Getty Images
By Eliza Berman

Sure, Dustin Hoffman caught his big break 50 years ago seducing a lonely mom in The Graduate. But some of the actor’s most memorable roles have been as fathers of all varieties: doomed (Death of a Salesman), beleaguered (Kramer vs. Kramer), overly hug-prone (Meet the Fockers). The two-time Oscar winner’s latest onscreen patriarch is Harold Meyerowitz, a megalomaniacal sculptor in Noah Baumbach’s The Meyerowitz Stories (New and Selected) streaming on Netflix and in theaters now. Hoffman, 80, talked to TIME about getting in–and out of–character and what he’s learned about acting from his relationships with his own family.

ON HIS RELATIONSHIP WITH HIS FATHER HARRY

We had the same birthday. When he turned 80, I turned 50. We were at the beach walking along the shore, and I said, “So, Dad, what can you tell me? What kind of wisdom can you impart?” He was very short, 5’2″, and he looked up at me and said, “It’s all bullsh-t.” And he walked away. I’ve never forgotten it. It was so Willy Loman, because he wanted to leave an inheritance, like Willy. I was so nervous when he came to see that play [Death of a Salesman]. I said, “Oh, God, he’s going to know what I’m doing.” He came backstage, and I said, “What’d you think?” He said, “Boy, that guy’s some loser.”

ON BEING A DAD

You inherit certain things. My wife, we’ve been together 40 years, and she knew my parents. There were times when the kids were little and I would get upset, and she would say, “Harry’s coming out.” And she was right. I don’t think there’s a way around it. You spend a lifetime–I do anyway–trying to un-wreck yourself. Because you’ve been wrecked.

ON GETTING INTO CHARACTER

I think it has to be in you. It’s autobiographical. You think you’re finding it outside, but you tap in to it somehow. For this movie, I enlarged a part of myself that I inherited from my father. I think there’s an unwritten law with sons where the father, without stating it, lets you know very early on that you are not to surpass him. As a little kid, you pick up on an amazing amount intuitively. I drew on that.

ON PLAYING A CRIMINAL IN STRAIGHT TIME (1978)

You learn in acting school: This guy’s a killer. Have you ever killed anyone? No. Almost killed anyone? No. Have you ever been so angry that you could kill someone? Getting closer. There’s nothing that makes me more furious than waking up and hearing a mosquito. It’s landed on you, and you have to kill it. You turn on the lights and finally get it, and there’s a certain amount of blood–your blood–that spatters. That’s the part of you that you enlarge.

After The Graduate, I was kind of first in line of my generation. When I think back, I think, I shouldn’t have turned Ingmar Bergman down twice. I shouldn’t have turned Spielberg down four times. I have spent many years in therapy finding out why. I tried to jeopardize my success, and in spite of myself, I couldn’t succeed. But I’m still sad that I made those mistakes.

ON HIS KIDS AND HIS MOVIES

One thing I tried to do is never encourage my kids to see my work. There were no posters on the wall. Growing up, they made fun of me because I’d say, “Let me put this on, you’ll love this.” They’d say, “Is it black and white, or color?” I’d say, “Black and white.” No! “Is it a documentary about bugs?” I’d say, “Yes, but you’ll love it!” They learned not to listen to me. But I don’t have a kid who’s seen everything I’ve done. I don’t want to belabor them in that way.

ON HIS EARLY AMBITION TO BE A JAZZ PIANIST

I didn’t read music easily, and I didn’t have anywhere near perfect pitch. We were in the car [today] next to a cement mixer, and I remembered a song I knew as a kid: “cement mixer, put-ti put-ti.” The writer was Slim Gaillard. I would give anything to have been able to do that. If God tapped me on the shoulder and said, “You can’t do anything more in your profession. In exchange, I’ll allow you to be a jazz pianist”–[snaps fingers]–like that. Oh, God. 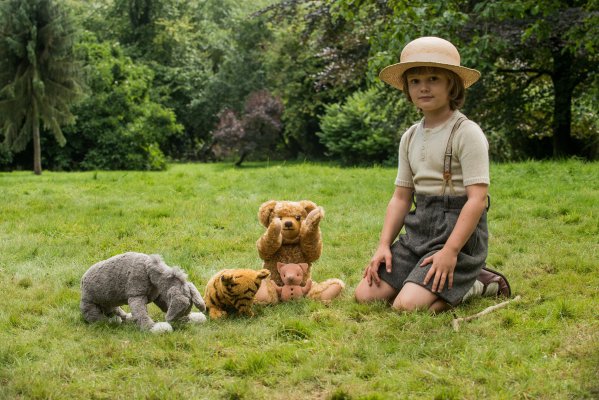 The True Story Behind Winnie the Pooh and Goodbye Christopher Robin
Next Up: Editor's Pick