Hillary Clinton said Wednesday that she plans to give away political contributions from Harvey Weinstein as part of her annual charity donations.

“What my former colleagues are saying is they’re going to donate it to charity, and of course I will do that,” she told CNN’s Fareed Zakaria. “I give 10% of my income to charity every year, and this will be part of that. There’s no doubt about it.”

Several Democratic lawmakers said that they will donate the money they received from Weinstein to charities that help women following an explosive report in the New York Times report that revealed the Hollywood mogul and major Democratic donor had amassed three decades worth of sexual harassment allegations. Weinstein contributed more $20,000 to Clinton’s campaigns since she ran for U.S. Senate in New York in 1999, according to the Center for Responsive Politics.

Clinton’s spokesperson did not immediately respond to request for comment and additional details about where that money would go. On Tuesday, Clinton released a statement claiming she was “shocked and appalled” by the revelations about Weinstein, and praised the women who had spoken out against him. That same day, more allegations emerged; The New Yorker reported that three women claimed Weinstein had raped them, and the Times reported more allegations from high-profile figures like Gwyneth Paltrow and Angelina Jolie. A spokesperson for Weinstein denied “any allegations of non-consensual sex” in response to both reports.

In her interview with Zakaria, Clinton reiterated the sentiments she expressed in her statement, and said she had no idea any of this had transpired. “This was a different side of a person who I and many others had known in the past,” she said. “I was just sick, I was shocked, I was appalled.” 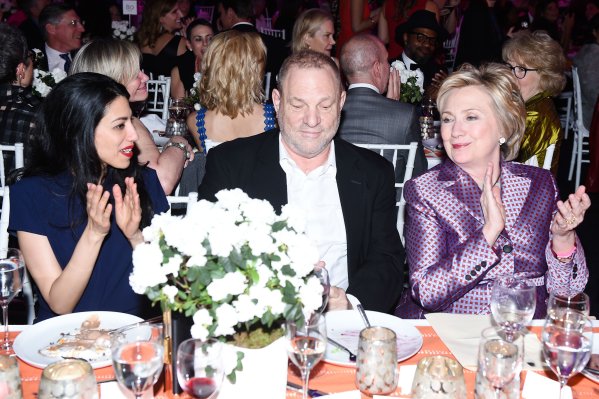 Clinton Finally Spoke Out Against Donor Weinstein
Next Up: Editor's Pick