Ben Affleck on Wednesday apologized to Hilarie Burton after the actor claimed Affleck groped her on television years ago when she was hosting MTV’s TRL.

Burton spoke out about the encounter on Tuesday after Affleck had condemned Harvey Weinstein.

“I am saddened and angry that a man who I worked with used his position of power to intimidate, sexually harass and manipulate many women over the decades,” Affleck said said in a statement about Weinstein on Tuesday.

Weinstein, a longtime Hollywood movie mogul, is facing a growing number of allegations of sexual assault and in some cases even rape. A spokesperson this week said Weinstein denies “any allegations of non-consensual sex.”

“I appreciate the way I’ve behaved with colleagues in the past has caused a lot of pain, and I sincerely apologize for it,” Weinstein, who has been fired from his company, said in the explosive New York Times report that opened the floodgates last week.

After Affleck’s initial statement, a Twitter user quickly accused him of hypocrisy by recalling a 2003 interview on TRL between Affleck and Burton, in which Affleck goes to wrap one arm around Burton for a hug and apparently grabs her breast.

In response, Burton tweeted that she “didn’t forget” and that she “was a kid” at the time.

“I had to laugh back then so I wouldn’t cry,” Burton later tweeted, along with a TRL video compilation of uncensored moments. Among the clips were Affleck asking Burton if she was 19, and a separate interview in which Burton tells the camera her left breast was grabbed.

Burton hosted the popular music video show before landing a role on One Tree Hill in the early 2000s. Burton, Affleck and MTV did not immediately respond to requests for comment. 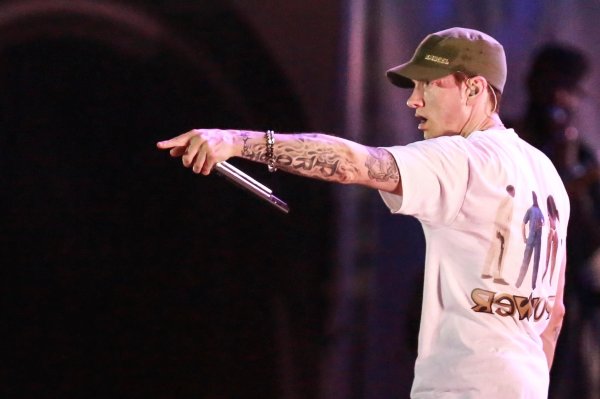 ‘This Racist 94-Year-Old Grandpa.’ The 4 Biggest Disses in Eminem’s Trump Rap
Next Up: Editor's Pick