Donald Trump Keeps Cursing. Here's Why It Might Help Him

Many American politicians have used curse words, but few have done so the way Donald Trump does.

Past presidents have been known to use indecorous language in private talks with their advisors or unguarded moments that were caught on tape, but none have made such dramatic and repeated use of curse words in public events.

Speaking at a rally in Alabama in September, Trump argued that NFL players like former San Francisco 49er Colin Kaepernick who take a knee during the national anthem should be fired.

“Wouldn’t you love to see one of these NFL owners, when somebody disrespects our flag, to say, ‘Get that son of a b—- off the field right now. Out! He’s fired. He’s fired!'” he said.

Of course, other politicians have sworn. Vice President Joe Biden called the Affordable Care Act a “big f—ing deal” in a moment picked up by a microphone, while President George W. Bush called a reporter a “major-league a–hole” in another hot mic moment. Vice President Dick Cheney once told a Democratic senator to “go f— yourself,” and presidents Richard Nixon and Lyndon Johnson were notoriously profane while talking with advisors.

But those were all private moments. Trump has regularly used curse words at public events, especially on the campaign trail where he sprinkled his speeches liberally with “damn” and “hell” and even “s—“ and “p—-.” In a notorious speech in Las Vegas in 2011, he dropped the f-word repeatedly, arguing that his message to China would be ““Listen you motherf—ers, we’re going to tax you 25 percent!”

Research has shown that Trump’s use of swear words could be strategic, helping his image as a truthteller unafraid of being politically incorrect.

To learn more about how Trump’s curse words work, watch the video above. 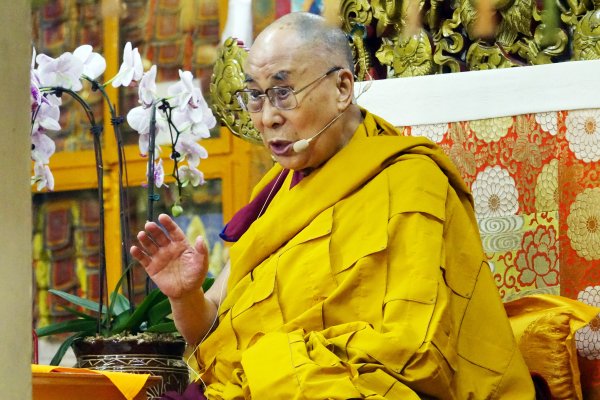 The Dalai Lama Says the U.S. Is More 'Selfish' Under President Trump
Next Up: Editor's Pick