Eminem may have unleashed a fiery torrent of criticism against Donald Trump on Tuesday night during an aggressive freestyle cypher at the Hip Hop Awards, but the outspoken Detroit rapper and the current president weren’t always at such political odds. In fact, back in 2004, Trump himself appeared on an Eminem television special to “endorse” the artist for a fictional political run.

Standing at a podium — with a title card identifying him as the “Chairman of the Joint Chiefs of Cash” — Trump introduced the “candidate” Slim Shady during the Shady National Convention, a TV stunt that kicked off Eminem’s satellite radio channel Shade 45 in 2004.

“Of course I’m right. I’m always right,” Trump said then in his remarks. “I know a winner when I see one. And Donald Trump is telling you, right now, Slim Shady is a winner. He’s got brains. He’s got guts. And he’s got Donald Trump’s vote. Ladies and gentlemen, our great candidate, Slim Shady.”

Eminem himself also spoke at the “convention,” in a rhetorically vapid parody of official party speeches.

“Americans like you and me and like all of us have been given hills to climb and the strength to climb these hills, and because we have made that hard journey, we can finally see the valley below. And what is below that valley, you ask? I don’t know. But nothing will stop us from getting there,” he deadpanned. “Democrats and Republicans alike, and that other guy, they had conventions, and they looked cooler than this one, but so what? So what, I say to them. And what am I running for, you ask? I don’t run from anything. That’s the thing. I tackle the issues head on.”

In his freestyle on Wednesday night, however, Eminem had a much clearer message.

“We better give Obama props, cuz what we got in the White House now is a kamikaze that’ll probably cause a nuclear holocaust,” he rapped. “And any fan of mine who’s a supporter of his, I’m drawing in the sand a line, you’re either for or against.” 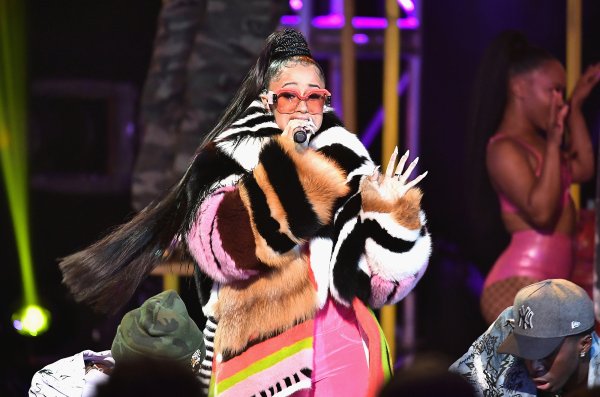 How Cardi B Paid Homage to New York With Her BET Hip Hop Awards Performance
Next Up: Editor's Pick