The MacArthur Foundation on Wednesday named 24 new “geniuses,” or fellows who receive a hefty cash prize to spend however they see best fit. MacArthur winners show “exceptional creativity in their work and the prospect for still more in the future,” the Chicago-based organization says.

Each member of the incoming class, which includes social activists, scientists, musicians, academics, architects and more, will receive $625,000 spread out over the next five years.

For many “geniuses,” the money represents a potentially life-changing sum. Past recipients have often put their newfound wealth into the causes that won them a MacArthur “genius” grant in the first place.

TIME reached out to some of this year’s MacArthur “genius” winners to find out more about their plans for the grant money. Here’s what they had to say:

Greg Asbed, 54, Human Rights Strategist and Co-founder of the Coalition of Immokalee Workers

Greg Asbed tells TIME his prize money will go straight back into the Coalition of Immokalee Workers, a worker-based human rights organization. Asbed says the Coalition pioneered Worker-Driven Social Responsibility (WSR), or the use of workers’ collective power to pressure food companies into purchasing ingredients from sources that respect human and worker rights.

“In this country we have countless problems, many of which can’t be fixed easily,” Asbed tells TIME. “We have one here now that can be fixed and we need to spread it to more people, and that’s what the money will be used for.”

Cristina Jimenez Moreta, the co-founder and executive director of United We Dream who was named as a 2017 MacArthur fellow, pictured on Sept. 21, 2017.
MacArthur Foundation—AP

Cristina Jimenez arrived in the U.S. from Ecuador as an undocumented immigrant at the age of 13. Her network, United We Dream, provides support for young immigrants and their families. A spokesperson for Jimenez told TIME that Jimenez’ vision is to “transform the politics of the United States so that all people can thrive here and live without fear.”

“The MacArthur Fellowship will enable me to steer United We Dream in its mission to provide resources and support to immigrant youth and communities of color while striving, in the long term, to make inroads on immigration policy reform,” said Jimenez in a statement.

Jason De Leon is an academic whose work is “bringing to light the lives and deaths of clandestine migrants crossing the U.S.–Mexico border,” according to the MacArthur Foundation.

De Leon laid out a five-point plan for what he plans to do with the money, which prioritized paying off his student loans and “getting some tickets to see [singer-songwriter] Jason Isbell.” Further down the list, he described weightier ambitions, including “putting funds toward some continuing research projects on human smuggling and also on recovering and identifying migrant bodies in the desert.”

Berlin-based artist Trevor Paglen told TIME he would use the money to do “exactly the same thing I’ve been doing.” That, according to the MacArthur Foundation, is creating art which explores “infrastructures of warfare, surveillance, and social control that are generally hidden from the general public.”

After Superstorm Sandy, Orff helped design a Staten Island project called Living Breakwaters, which is “designed to support the growth of oyster reefs and other marine habitats and to defend against wave damage and coastal erosion.” Orff told TIME she will use the prize money to “double down on research in ecological infrastructure and new forms of public space.”

Viet Thanh Nguyen won the MacArthur grant for challenging popular depictions of the Vietnam War, as well as exploring how the conflict lives on for those it displaced. Nguyen told TIME that he will use some of the money to hire an editor for DVAN’s blog, diaCRITICS, which he has been unable to run due to his busy schedule.

“I believe in DVAN and diaCRITICS’ mission to promote Vietnamese voices,” he said.

Emmanuel Candes is a mathematician who specializes in the reconstruction of high definition signals from incomplete datasets.

“I will continue to support graduate students and post-doctoral fellows as I have done until [now],” Candes tells TIME. “These young scholars take me into new directions where I would not venture by myself, they have enriched me as a person and improved me as a researcher. My success is really theirs. On a lighter note, I would also like to fix my sailboat because one of my dreams is, one day, to sail from San Francisco to Hawaii with some of my dear friends.”

Rich is the founder of the Center for Urban Pedagogy, a collaborative effort that uses “the power of design and art to increase meaningful civic engagement.” He told TIME: “The fellowship will be invaluable to our urban design and planning studio, Hector, as we establish ways to work with complex coalitions of community organizations, government agencies, businesses, advocates, and schools to create more democratic and accountable spaces—it definitely gives us a lot to think about.”

Derek Peterson, 46, Historian of Africa at the University of Michigan

Derek Peterson in his office at the University of Michigan, 9/11/2017
John D and Catherine T. MacArthur Foundation

Peterson is a historian who the MacArthur Foundation says is “reshaping our understanding of African colonialism and nationalism in studies that foreground East African intellectual production.”

For the past ten years he has been working in collaboration with colleagues in Uganda to digitize endangered historical archives held by local governments there. He told TIME: “The MacArthur grant will allow me to take that work into new media. I’ve just started working with colleagues at the Uganda Broadcasting Corporation on a project to digitize the radio and television archives, which stretch back to the 1960s and feature hundreds of historically important recordings and broadcasts. MacArthur funds will help pay some of the costs of that work.”

Sorey is a multi-instrumentalist based in Connecticut. His work involves “assimilating and transforming ideas from a broad spectrum of musical idioms and defying distinctions between genres, composition, and improvisation in a singular expression of contemporary music.” He told TIME he would use the money to “continue to do everything I can to make the world a better place – through music”.

Correction: A photo caption in the original version of this story misstated the location of Wesleyan University. It is located in Middletown, Conn., not Littletown. The original version of this article also used a mission statement for Damon Rich’s design studio, Hector, to describe the Centre for Urban Pedagogy (CUP). It has been updated with the correct statement. The article also originally described Kate Orff as an architect. She is a landscape architect. 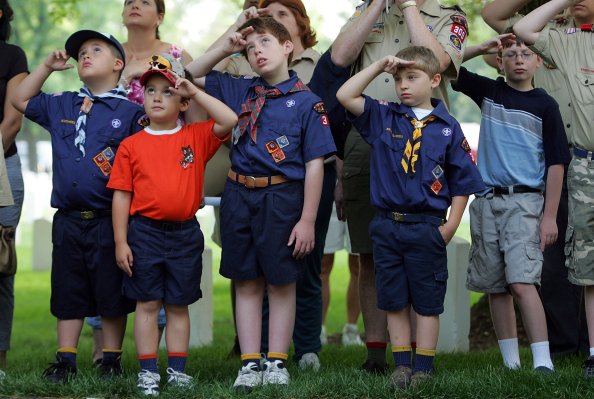 Boy Scouts Will Let Girls Join as Cub Scouts
Next Up: Editor's Pick