Eminem unleashed a freestyle rap in which he attacks President Donald Trump’s leadership and calls the commander-in-chief a “racist 94-year-old grandpa.”

The rapper, who was widely popular for his controversial rhymes in the early 2000s, lashed out at Trump in a roughly four-minute pre-recorded rap clip revealed during Tuesday night’s BET Hip Hop Awards.

In the expletive-laced freestyle, which has no music track, Eminem takes aim at Trump for many issues, including how the President is handling nuclear tensions with North Korea and disaster aid for the storm-battered Puerto Rico. Eminem, who has previously been vocal about disliking Trump, also defends athletes who have been protesting the President and disavows his fans who support Trump.

Here are the most powerful four lines from Eminem’s freestyle:

“What we got in office now is a kamikaze”

Eminem accused Trump of cowardice, saying the President would start a nuclear war and then fly around in a plane to avoid any personal danger. “What we got in office now is a kamikaze that’ll probably cause a nuclear holocaust and while the drama pops, and he waits for s–t to quiet down, he’ll just gas his plane up and fly around ‘til the bombing stops,” Eminem said. The line is likely in reference to mounting tensions, and a recent exchange of insults, between Trump and North Korean leader Kim Jong Un.

“All these horrible tragedies and he’s bored”

Eminem slammed Trump for tweeting about his anger over NFL players kneeling during the national anthem while there are more pressing national matters to tackle. “But this is his form of distraction, plus he gets an enormous reaction when he attacks the NFL, so we focus on that instead of talking Puerto Rico or gun reform for Nevada. All these horrible tragedies and he’s bored and would rather cause a Twitter storm with the Packers,” the rapper said.

“This is for Colin”

In the clip, Eminem raises his closed fist and states his support for former San Francisco 49ers quarterback Colin Kaepernick, who remains unemployed after starting the NFL kneeling movement. Eminem says: “This is for Colin. Ball up a fist and keep that s–t balled like Donald the b–ch.”

“The rest of America, stand up.”

Eminem ends his freestyle by cursing and sticking up his middle finger to his fans who support Trump. “Any fan of mine who’s a supporter of his, I’m drawing in the sand a line. You’re either for or against, and if you can’t decide who you like more and you’re split on who you should stand beside, I’ll do it for it for you with this. F— you,” Eminem says. “The rest of America, stand up. We love our military and we love our country, but we f—— hate Trump.” 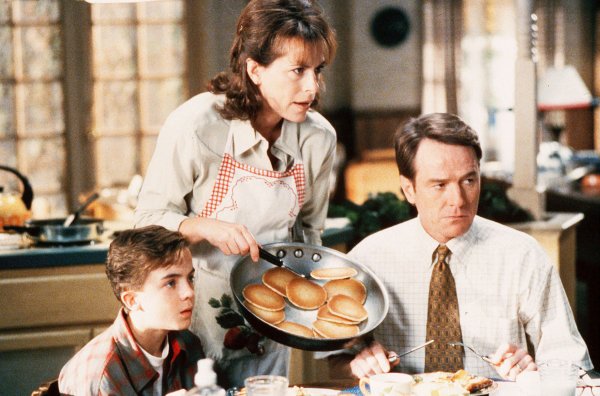 Frankie Muniz Says He Doesn’t Remember Much of Malcolm in the Middle
Next Up: Editor's Pick