Just weeks after trolling President Donald Trump’s reversal of the “Dreamers” program with a 65-foot tall image of a toddler peering over the US-Mexico border wall, the French artist behind the installation is back, eyeing the border once again. This time, the artist has installed Giant Picnic, an enormous table spanning both sides of the wall and adorned with two eyes. The artist, who goes by the name JR, said on Instagram that he painted “the eyes of the dreamer” atop the installation extending across Tecate, Mexico and Tecate in California.

Picnic-goers on both sides of the border came together to break bread at the fully functioning table during the one-day display.

“People eating the same food, sharing the same water, enjoying the same music (half of the band on each side) around the eye of a dreamer… we forgot the wall for a minute,” JR, the artist, said.

JR is known for his large-scale artwork inspired by social themes, which he has installed — often without official permission — all around the world, in places spanning from Sierre Leone, to Japan and Brazil. Though he acknowledged that his picnic artwork was technically forbidden, it was not shut down, and during the Sunday display he even paused for cup of tea with a border patrol officer.

In September, JR erected a billboard-sized painting of Kikito, a one-year-old boy looking over the steel bars of the Tecate border fence. The artwork went up just as Trump announced he was rescinding the Obama administration’s Deferred Action for Childhood Arrivals (DACA) plan, which protects undocumented immigrants brought to the U.S. as children from deportation.

The Giant Picnic event coincided with the White House issuing a long list of hard-line immigration demands in exchange for a deal to keep the DACA program, which would allow the 800,000 “Dreamers” to remain in the country. Among the measures delineated by Trump are a widely panned campaign proposal to construct a wall between the U.S. and Mexico, a pledge to restrict federal funding for “sanctuary cities” and a tightening of the green-card system that would limit lawful permanent residents. 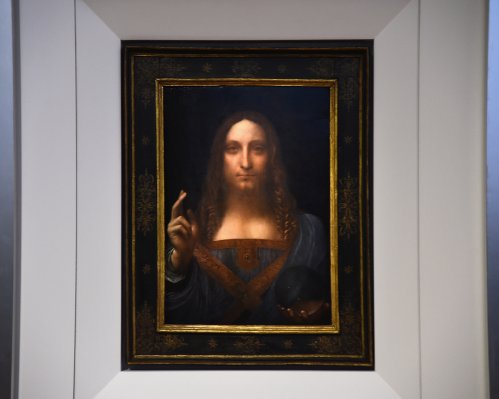 Da Vinci Masterpiece Is Up for Sale for a Mere $100 Million
Next Up: Editor's Pick