Eugene F. Rivers, III is the founder and president of the Seymour Institute for Black Church and Policy Studies. Carl A. Anderson is CEO of the Knights of Columbus and a former member of the U.S. Commission on Civil Rights.

In the current climate, our country desperately needs to rediscover the moral example of Reverend Dr. Martin Luther King, Jr. His commitment to loving nonviolent struggle and protest was a principled response to the verifiable injustices committed against defenseless black people in our society.

From King’s conception of love and non-violence sprang the equally weighty duty of confronting those responsible with the call to end a system of racial subjugation.

In his essay “Nonviolence and Racial Justice” published in the Christian Century in 1957, King laid out a path forward for the country modeled on a love-based, nonviolent resistance. He wrote:

“At the center of nonviolence stands the principle of love. In struggling for human dignity, the oppressed people of the world must not allow themselves to become bitter or indulge in hate campaigns. To retaliate with hate and bitterness would do nothing but intensify the hate in the world. Along the way of life, someone must have sense enough and morality enough to cut off the chain of hate. This can be done only by projecting the ethics of love to the center of our lives.”

If King were here today, we know from the historical record, that he would have condemned in the most explicit terms, any form of violent political protest.

He would have condemned both the program and the violence of neo-Nazis, white supremacists, and other racist hate groups. While even these – like all Americans – have the constitutional right to speak and protest, they have neither a constitutional nor a moral right to violence. King would have spoken up clearly on all of that. In fact, his entire program was designed to show the moral and political bankruptcy of those who traded in racism.

But King would not have sanctioned the violent actions of extremists such as Antifa either. If they seek to resist racism, they should adopt him as the exemplar of legitimate opposition.

For King, nonviolence did not mean staying silent, it meant speaking and acting against racism while avoiding the violent tactics of the racists.

Six decades after Dr. King wrote, we – and other religious leaders from throughout this country – have added our voices to his, signing a letter embracing the principles that he laid out in that essay. We understand that trying to justify violence based from any political viewpoint is a recipe for coming apart at the very moment we need to come together.

Now as then, we must choose whether this country will overcome deep racial and political divisions with justice and forgiveness, or deepen them with hatred and violence.

Concrete examples of the power of forgiveness continue to show the importance of heeding the better angels of our nature. In Charleston, S.C., in 2015, the congregation of Mother Emmanuel AME Church reacted with love and forgiveness to an act of domestic terrorism. The pastor and eight members of the congregation were murdered immediately following a prayer meeting which the killer had attended with them. Their reaction stood in sharp contrast to the urge to retaliate that has met violence elsewhere. Dylann Roof had wanted to launch a race war, but the forgiveness expressed by the families of the victims and the congregation affected meant that love stopped that outbreak of racist violence from going any further.

That church community reminded us of the truth of Rev. King’s words 50 years ago in his book Where Do We Go from Here: Chaos or Community, where he wrote:

The actions of the community of Mother Emmanuel captured the attention of the country because hatred and revenge are often easier paths to follow than love, nonviolence, and forgiveness. When wronged, “an eye for an eye” is often more appealing to us mortals than the tougher admonition “love your enemies.”

For that reason – among others – love and nonviolence are all the more powerful. Especially in a democracy, nonviolent principles do not enable evil or violence to triumph, rather they break their hold and show a better path forward by staking out a moral high ground that is indisputable. Acting on these standards underlines the deficiencies of the opposite path while also showing a better way to our antagonists.

The better path, the only path to our salvation as a country, was made clear by Rev. King in 1967: “The beauty of nonviolence is that in its own way and in its own time it seeks to break the chain reaction of evil.’’ We can again break that chain reaction, and the prescription is the same one given by Rev. King. Now as then, religious leaders have taken the first step. For their own sake – and that of future generations – the rest of the country should do so as well. 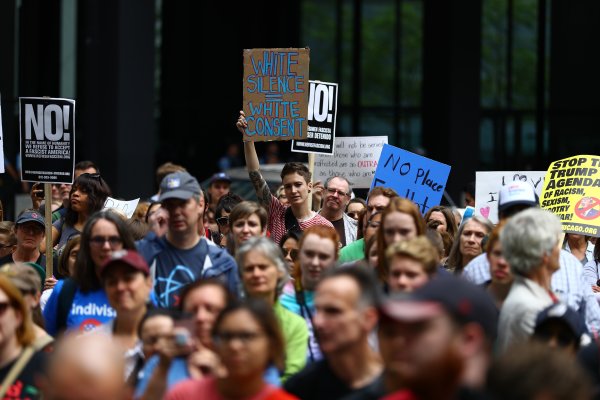 70% of Americans Think Race Relations Are Bad
Next Up: Editor's Pick