'It Looked Like the Apocalypse.' California Residents Watch in Horror as Wildfires Destroy Their Homes

Eduardo Flores and his wife could only stare in shock as a massive fireball swallowed their longtime home in Santa Rosa, Calif. within minutes.

The Army veteran had woken up to use the bathroom about 1 a.m. Monday when he saw a blood-red sky outside. The wildfires that would leave at least 21 people dead and more than 3,500 structures destroyed in California’s wine country had reached his front door.

“It was literally raining fire. We were choking, gasping for air,” he told TIME on Tuesday.

Flores rushed outside to warn his sleeping neighbors in the Journey’s End Mobile Home Park. He hammered on their doors with his fists and smashed their windows while screaming. Ten minutes later, he and his wife grabbed their dog, left all their belongings behind and made their way to a nearby hospital, where they climbed to the third-tier parking lot. They had an aerial view of the destruction.

“We were watching unit by unit by unit burn down,” said Flores, 66. “We just stood there in shock. It was so fast. My house just burned down in front of me.”

Flores, who served in Vietnam, said the raging fire — worsened by high winds and exploding containers of propane and gasoline in the trailer park — brought him back to the war. “It was like napalm,” he said. “It was like a bad flashback.”

Flores and his wife lost everything they owned, including passports, birth certificates, photos and a 160-year-old blanket his great-great grandmother had woven. They’re staying at a group home in Santa Rosa, where his paraplegic sister lives, for now. But Flores, a mental health care worker, still feels relatively lucky.

“By the grace of God, we got out with our lives,” he said.

About three miles away in Coffey Park, Lynn Dorsey and her husband Bill also ran for their lives around 1 a.m. Monday when nearby homes became engulfed in flames.

“There were embers and sparks raining down from our backyard,” she said. “It looked like the apocalypse.”

The Dorseys drove to safety and spent the night at a friend’s house. Nine hours later, they headed back home, hoping the two-story, four-bedroom house they had lived in for more than two decades was still standing. But it had burned down, along with more than a dozen other homes in the neighborhood.

“I said, no, no, no, this is not happening to us,’’ Lynn Dorsey, 58, recalled, breaking down in tears. “It was like a war zone. It looks like an atomic bomb was dropped with everything leveled.”

Instead of their home, which had always been filled with music and laughter, there were piles of ashes. “It was like standing in a burned down forest,” Bill Dorsey said. “I can’t stop crying. It’s so overwhelming, it’s sort of numbing.” 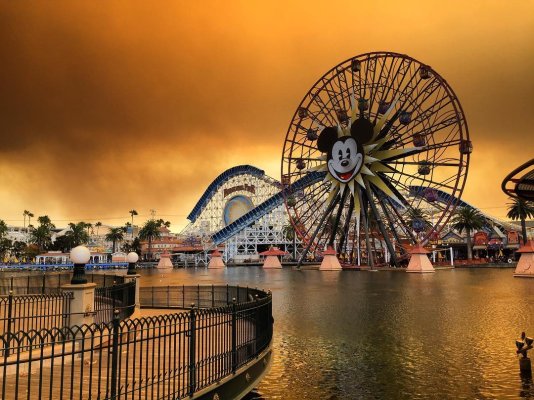 Disneyland Looks Terrifying As Wildfires Tear Through California
Next Up: Editor's Pick