Football players Terrance Smith #48, Eric Fisher #72, Demetrius Harris #84, and Cameron Erving #75 of the Kansas City Chiefs is seen taking a knee before the game against the Los Angeles Chargers at the StubHub Center on September 24, 2017 in Carson, California.
Sean M. Haffey—Getty Images
By Sean Gregory

President Trump continued his verbal war with the NFL on Tuesday with a tweet questioning whether the league should continue to receive federal tax breaks while its players protested during the national anthem.

The only problem? The “massive tax breaks” the NFL is supposedly receiving could be characterized as, well, “fake news.” While the NFL was once considered a non-profit by the IRS, that hasn’t been the case for more than two years.

In April of 2015, the NFL announced it was voluntarily relinquishing its tax-exempt status. The motivation was privacy and public relations, not altruism. As a tax-exempt non-profit, the NFL was required to disclose the compensation of some of its highest paid employees, including Commissioner Roger Goodell, who made $44 million in 2012, and $35 million in 2013. Goodell’s earnings subjected him to criticism. In a memo to NFL teams, Goodell called the tax-exemption a “distraction.”

Read More: Inside Donald Trump’s Latest Battle with the NFL

NFL officials concluded that the economic value of the tax-exemption wasn’t worth the headaches, particularly since many league critics tended to characterize all the NFL’s business as tax-exempt. In actuality, an overwhelming majority of NFL income was, and continues to be, subject to taxation. Individual teams generate the bulk of the NFL’s revenues, which are roughly $14 billion annually. The NFL league office was tax-exempt, but it accounts for a mere fraction of that haul: just $9 million in income during the 2012 tax year, for example.

That’s not to say NFL teams don’t benefit from some level of government support. Local government subsidies for stadium construction, for example, are fair fodder for debate across all pro sports: countless economic studies have shown that local taxpayers rarely see a return on big-ticket pro sports investments. But that’s not what Trump appeared to be calling-out. His tweeted gripe seemed directed at a tax exemption that no longer exists, and never was as substantial as critics contend when it did. 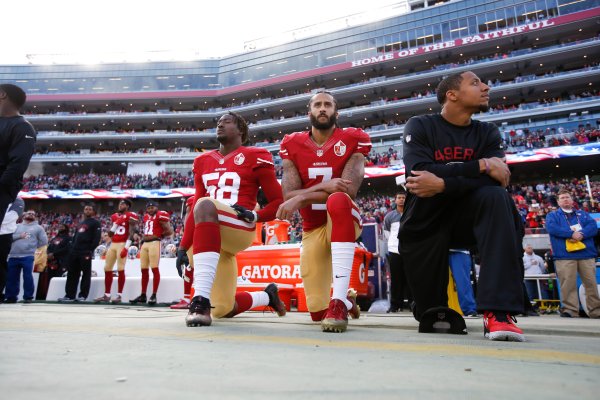 Colin Kaepernick Denies Report That He’d Stand for Anthem If He Was Back in the NFL
Next Up: Editor's Pick