Here’s Why October Is California's Most Dangerous Month for Wildfires

By Jennifer Calfas and Tara Law

California has declared a state of emergency as deadly wildfires are raging from Northern California’s wine country to the hills near Los Angeles. Three people have been killed, according to the California Department of Forestry & Fire Protection, and hundreds of thousands have been forced to leave behind their homes and businesses amid the blazes. Meanwhile, pre-planned power outages meant to reduce the risk of wildfire have left millions in the dark.

The fast-moving nature of these fires is typical for the month of October. Though it may seem counterintuitive because of the cooler weather, October is the most dangerous month for California wildfires as dry vegetation and seasonal winds fuel speedy flames.

“By the time you get to this season, right when you’re starting to anticipate some rain, it’s actually the most fire prone part of the year,” says Max Moritz, a wildfire specialist at UC Santa Barbara.

With a Mediterranean climate, California has wet, cool winters and warm, dry summers. At the end of the warmer season, brush and vegetation across the state is at some of its driest levels due to the absence of rain for several months, Moritz said.

That dryness may be amplified now due to California’s long-standing drought, which lasted more than seven years. Though state officials declared the drought over thanks to a damp winter last season, much of the state’s vegetation has yet to recover. Dry vegetation easily fuels wildfires, which are amplified by October’s seasonal winds. Northern and parts of southern California have experienced high winds and low humidity this month has led the National Weather Service to issue several “red flag warnings,” which are meant to warn that there could be “rapid or dramatic increases in wildfire activity.”

“All you need is ignition and you have the perfect storm, really,” Moritz said. 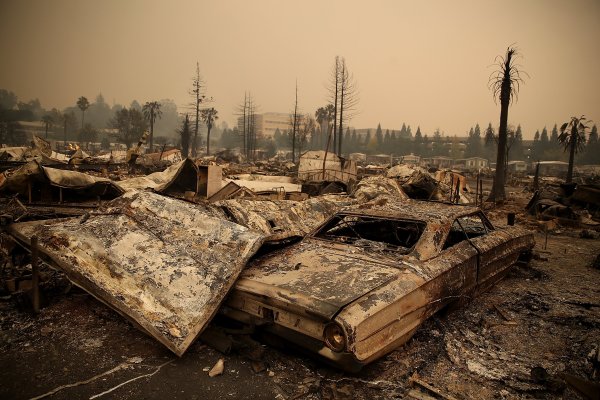 Californians Speak About Losing Their Homes
Next Up: Editor's Pick