The 10 Most Fascinating Theories About Stranger Things Season 2

By the end of the first season of the sci-fi mystery Stranger Things, fans were left guessing. Was Eleven connected to the monster? What’s up with the slug Will coughed up? Is there more to the story of Hopper losing his daughter?

To try to answer those questions, Stranger Things theories about the Netflix original series started rolling in. The show’s co-creator Matt Duffer says most of the Stranger Things fan theories circulating online are “very wrong,” but he added that a few are “right or very close.”

Which theories could predict what happens in Stranger Things season 2? Just like Hopper digging up articles about MK Ultra on Hawkins Lab, we’re on the case. Ahead of the premiere on Oct. 27, we pulled together 10 fan theories on what lies ahead.

(We’ve included a few Stranger Things conspiracy theories of our own because as the squad proved, geeking out pays off, so everyone should get in on the fun.)

1. The Season 1 Monster and Eleven Are the Same

In the sixth episode of season 1, Eleven (Millie Bobby Brown) did actually warn Mike (Finn Wolfhard): “The gate… I opened it. I’m the monster.” She probably just means she feels responsible for singlehandedly making the boring town more interesting by opening the portal. But if we take what she said literally, she’s the one who’s been wreaking havoc all over Hawkins, Indiana.

By piecing together observations from social media, Uproxx made the case that the Stranger Things monster is actually the physical manifestation of the trauma Eleven carries around with her. You know, just Another Classic Scenario We Could Know More About If Eleven Used Words More.

Likelihood: Unclear. Supporting evidence: When she finally vanquishes the monster, she destroys herself (temporarily) in the process. Superfans also noted that the show references X-Men 134, a comic book that also features a telekinetic character who struggles with her dark side. For the purposes of Stranger Things, however, it probably makes more sense for Eleven to be the hero.

In non-supernatural Stranger Things fan theories, there is the pressing question of who Nancy (Natalia Dyer) will go steady with in the fall of ’84. This Redditor says Steve’s toast.

Likelihood: Maybe? Last time we saw Nancy, she didn’t look so happy with Steve (Joe Keery) because he failed her by failing Barb (Shannon Purser). Another thing: She really bonded with Jonathan (Charlie Heaton) over the “Lived it: we believe in monsters” thing. Even though Nancy makes Steve want to be the best version of Steve he can be, she may belong with Jonathan. It just might take awhile.

3. The Upside Down Is a Dimension in Between Ours and a Much More Destructive Dimension

As the world expands, so do the threats. Some have posited that the Upside Down is just an in-between portal that’s more like a limbo between our world and a fun new hell hole for the kids to explore. This Stranger Things season 2 fan theory suggests that a much more terrifying other dimension invaded the Upside Down, which is just a toxic version of Hawkins complete with slugs, weird growths and those particles.

Likelihood: It makes a lot of sense that we could be going to a new dimension. Case in point: that glowing red sky and the spooky scary ink that accompanies the season 2 monster in the July trailer that premiered at Comic Con. We’ve never seen stuff like that before in the Upside Down, aside from a little smoke. And take a look at Eleven when she’s breaking through the wall goo in that season 2 trailer. Her nose is bleeding from exercising her powers, but the environment doesn’t look that terrible.

Dragon’s Lair, the arcade adventure game the boys play at The Palace in the Comic-Con trailer could reveal more about what’s about to go down.

Likelihood: This would be very on-brand one if true. Close watchers will recall that Things drew an overt parallel between Dungeons and Dragons and the plot. When we first meet Will, he has to make a move: either “fireball” the Demogorgon or cast a “protection spell.” (And in the shed when the monster is actually coming for him, he hides instead of shooting it.) If Dragon’s Lair ends up being a foreshadowing device, it could hint at some very sinister outcomes.

5. Is Will Drawing a Map For Everyone?

In the Comic-Con trailer, we see a freaked-out Will drawing what looks like the hairy, multi-limbed monster. It seems like Will is linked to it and knows what it wants. So what if the drawings aren’t crazy because he’s making a map to guide the squad to wherever they need to go?

Likelihood: Highly possible. The frenzied drawings seem to connect to each other, and many believe illustrations are key clues on the show.

6. The Upside Down Is Actually Inside Will

When we see Will pause Christmas dinner to cough up a demon slug courtesy of the Upside Down at the end of season 1, it looks like it’s definitely not his first sad trip to the sink. He spent some serious time on the other side, which means he probably has even more souvenirs to deposit into the town’s plumbing. Can he hopscotch between dimensions like Eleven now? Or does your mom need to drop acid at Indiana’s hottest club, Hawkins Lab, for that? Some posit that the monster is using Will and others as incubators for its spawn.

Likelihood: Some of the Stranger Things season 2 theories that Reddit spreads are pretty out there, but the monster probably is exploiting Will somehow. The Comic-Con trailer confirmed that the season 2 monster and Will are communicating. And when Hopper and Joyce find Will in the season 1 finale, the Demogorgon seemed to have stuffed a snake-like creature down his throat. Why would it do a thing like that? People think the episode titled “Pollywog” meaning tadpole a.k.a. baby toad will shed some light on this one.

7. The Season 2 Monster is the Thessalhydra from Dungeons and Dragons

So who’s this new eight-limbed creature looming in the stormy sky (see possibly related episode title: The Storm) and what’s it mad about? The majority of fans say the threat actor Finn Wolfhard dubbed “The Shadow Monster” is the Thessalhydra. It’s the multi-headed Dungeons and Dragons game piece introduced in the finale based on the monster from Greek mythology that can breed creatures. Comforting news!

Likelihood: This could add up, because the season one monster is nicknamed the Demogorgon. Plus, Will’s illustrations look just like it. So while he could just be having hallucination side effects thanks to the time he spent studying abroad in the Upside Down, it’s a supernatural show. If someone sees something nuts, it’s likely real and capable of doing real damage.

8. The Pumpkins Are Hatching Baby Monsters

In the trailer and promotional pictures, we see a pumpkin patch that looks like it’s rotting. Superfans propose the pumpkins are actually hatching wee little monster babies. How do the eggs get in there? How long until those mini monster pumpkins are in stores? The episode titled “The Pumpkin Patch” should tell us more.

Likelihood: Highly likely. Transforming something universally Halloween-y into something weird is such a Stranger Things thing to do given how the show has already turned Christmas lights into a supernatural channel. Either that or someone loves everything pumpkin.

In a heart-wrenching season 1 flashback, we see Hopper struggling to cope as his daughter seemingly dies of cancer. Enter a fascinating Stranger Things fan theory: maybe we don’t have the whole story because that’s just the way Hopper remembers it now. Could Hawkins Lab have stolen Sara for creepy purposes like this YouTube user believes?

Likelihood: Let’s not rule it out. One of the flashbacks that really got the rumor mill rolling showed Sara panicking. It was enough to convince some fans she saw something from the Upside Down. Even more telling, on two occasions, Hopper lies about how his daughter’s alive. Exhibit A: when he tells the science teacher she’s living with her mother. Exhibit B: in that bar scene, he gets the guy who “found” Will’s fake body talking by bragging that she won the spelling bee. Great detective work, or could Sara still be with us?

Harbour, who plays Hopper, has dropped all sorts of cryptic hints about the significance of his daughter. In a his Reddit AMA he revealed that the cause of his daughter’s death is a “secret,” and later told TV Guide she’ll be a primary focus in season 2.

And we know the broken cop feels cursed. Maybe he couldn’t save her and feels responsible. Even more compelling, did he move to his hometown because he sensed the lab was up to no good, as Inverse suggests?

10. The Kids Will Turn to Ghostbusters Tactics When They Team Up to Defeat Evil

In season one, the kids use Dungeons and Dragons logic (and cool science teacher lessons) to access the Upside Down via Eleven. Now the story is taking place the year of the summer megahit Ghostbusters. When it comes to who the people of Hawkins are going to call about that new monster hassle, is it these kids?

Likelihood: High. The boys are obviously obsessed with the movie. Look no further than their group costume they wear to school when no one else is dressed up, as seen in the Comic-Con trailer. But most interesting is the part when the trailer shows the kids capturing something rattling around in what looks an identical replica of the trap the Ghostbusters use to capture ghosts in the movie. 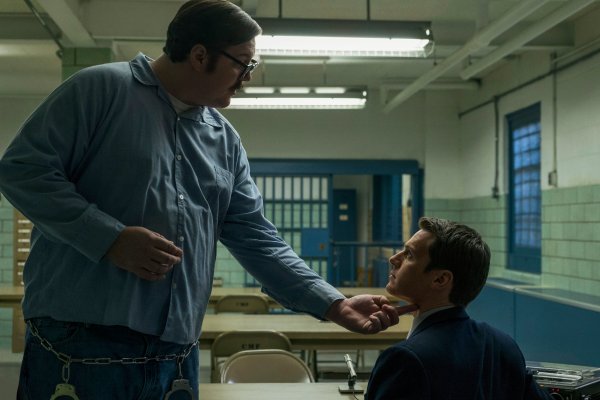 7 Things We Learned About Serial Killers From the Book Netflix’s Mindhunter Is Based On
Next Up: Editor's Pick