These Are the Best Unproduced Screenplays with Female Protagonists

The Black List— a yearly list of great scripts that are circulating in Hollywood but have not yet become movies — has a new gender-conscious cousin. After a 2011 study found that only about one-third of all characters in the top 100 films were women, the organizers of Athena Film Festival were motivated to create a parallel list, the Athena List, to highlight unproduced 3–5 screenplays featuring strong female protagonists. The first-ever batch of honorees will be fêted at the festival, Feb. 6–9, in New York City.

“If you follow Hollywood, you know the Black List and you know how it has become important in itself, being on this list,” says Melissa Silverstein, a co-founder of the Athena Film Festival and editor of the site Women and Hollywood. “There seems to be a need out there to have a conversation about this lack. Hopefully it will spur people to think that you can make a movie about a woman running for office as easily as you can about a man running for office. You can make a movie about a woman musician as well as you can make a movie about a man musician. A lot of the time, people get stuck in what they’re comfortable with. Our objective with the Athena List is to make people pay attention for a moment.”

(MORE: Report: Women Are Still Getting Shut Out in Hollywood)

Silverstein says that the four screenplays on the inaugural list, announced here at TIME.com, all feature a female protagonist in a leadership role. They are:

On the Basis of Sex, by Daniel Stiepleman: The story of Ruth Bader Ginsburg’s early years, including her time in law school and her first big sexism case. “It’s a really amazing portrait of a woman who was way ahead of her time,” says Silverstein.

The Good Years, by Rachel Feldman and Adam Price: The story of Lilly Ledbetter’s life before she became famous for the equal-pay act that bears her name; Silverstein compares it to Norma Rae.

The Sky’s the Limit: The Story of the Mercury 13, by Maria Burton, Gabrielle Burton, Ursula Burton and Jennifer Burton: A script, by four sisters, about the female astronauts who were prepared to go into space in NASA’s early days but then kept earthbound due to their gender. “It’s The Right Stuff but girls,” Silverstein says. “It’s a heartbreaking story.”

Audrey’s Run, by Emily Abt: The fictional tale of an African-American woman running for mayor of Boston, set in contemporary times.

The writers whose work has been selected say that it’s important to remember gender. Rachel Feldman, of The Good Years, says that Hollywood needs the Athena List.

“People would literally say, ‘Wow, what great writing but we can’t make movies with female protagonists,'” she says. “For many years, people were comfortable just saying that. Agents would say to you, ‘Can you turn the character into a man?'”

Daniel Stiepleman agrees. “[The Athena List] is one of those concepts that’s so brilliant for its simplicity,” he says. “Of course there are people looking for movies like this, especially actresses. Let’s do the hard work of looking for them first.”

The four listed screenplays are in varying stages of development — for example, Abt says Paula Patton is attached to Audrey’s Run — and the hope among the list’s curators is that the attention brought to the list will help get them into theaters sooner rather than later, nudging the needle on those statistics about how many films feature women as protagonists. Filmmaker Gabrielle Burton cites a positive example of something parallel managing to get that job done: the movie she’s currently directing (A Sort of Homecoming) was a gig she got thanks to the producer deciding to look to the Alliance of Women Directors for someone to work with. The Athena List, Burton says, is another way that a “mindful approach” to gender in filmmaking can help with the problem of underrepresentation.

Silverstein hopes that recent hype over female-led films, from Frozen to Gravity, is more than a fad. “You have to continue to build on them. It can’t just go away,” she says. “The fact that we have two more Hunger Games movies is good, but what’s going to come after?”

That question has yet to be answered, but the Athena List points in one possible direction — and Silverstein’s happy to talk about that path. “I spend so much time at my blog writing depressing things about the business. Some days you want to beat your head against the wall,” she says. “It’s uplifting to finally be writing something that’s good news about women in Hollywood.” 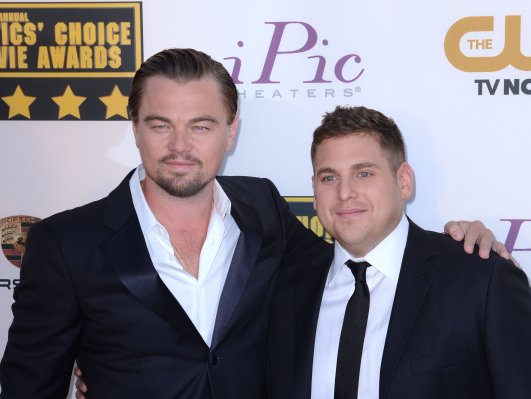 The Tragic True Story Behind Leonardo DiCaprio and Jonah Hill's Next Movie
Next Up: Editor's Pick