Domhnall Gleeson Proves Once Again That He Can Do Anything

Everyone has a soft spot for Winnie-the-Pooh. Everyone, that is, except Domhnall Gleeson, who had never read a Pooh book until he was cast as the beloved bear’s creator, A.A. Milne, and picked one up for research. “I was happy to find that they were good,” he says cheerfully, sipping a soft drink in a plush London hotel in late September. “Some things are inexplicably popular, but Pooh is not. You really understand why people love it so much.”

Gleeson understands what it’s like to be popular, at least with casting directors: Goodbye Christopher Robin is only the third of his six films due out this year. The charismatic Dubliner’s talent is obvious from the eclectic range of roles he’s taken on since breaking out as the affable Bill Weasley in the Harry Potter franchise. So far in 2017, he’s bossed around Tom Cruise in the crime thriller American Made and creeped out Jennifer Lawrence in mother! In the forthcoming Star Wars: The Last Jedi, he’ll battle the Resistance as the ruthless General Hux.

The copper-haired 34-year-old is clearly unafraid of venturing outside his comfort zone—if he even has one. “As an actor, you should feel like you’re wrestling the material, like it’s using up your energy and your resources. You should be drained by the process,” he says. “I think the key is not to be comfortable.”

Comfortable is not how audiences will feel watching Gleeson take on Milne. Far from the child-friendly stroll in the park one might expect of a film about honey-doped Pooh, Robin is a dark tale of child neglect and posttraumatic stress disorder. Gleeson stars alongside Margot Robbie, reuniting after their 2013 love story About Time, about a far more functional father-son relationship. In Robin, Milne’s son (Will Tilston) yearns for intimacy with his distant father, a British war hero, who is too busy promoting the characters he created to spend time with the boy who inspired them.

Both Gleeson and Robbie, who is Australian, required vigorous vocal training to affect the plummy English accents of Milne and his wife Daphne. “I would recite poems with my dialogue coach to help practice my voice,” he recalls. One was Philip Larkin’s “This Be the Verse,” which begins, “They f-ck you up, your mum and dad.” Quips Gleeson: “I think it was pretty appropriate for the film.”

The actor would adopt Milne’s clipped voice from the moment he woke up until the director called “cut” at the end of the day. Gleeson hopes his depiction of Milne’s strained voice conveys the character’s sense of repression. “Portraying PTSD onscreen terrified me,” he says. To prepare, he spent time researching the condition and speaking to sufferers. “I didn’t want it to come across as a melodramatic thing. I wanted it to feel contained and real.”

Domhnall Gleeson (r) and brother Brian Gleeson attend the press night after party for "Cat On A Hot Tin Roof" at The National Cafe on July 24, 2017 in London, England.
David M. Benett—Getty Images

Gleeson’s relationship with his own father hardly mirrors the disconnect between Milne and his son. He is close with Brendan Gleeson, the award-winning actor known for films like Braveheart and, alongside his son, Harry Potter. When Domhnall was young, he saw how much the profession fulfilled his father, which fueled his desire to become an actor. “I also knew that it was desperately difficult when you were not working,” he adds. Domhnall’s younger brother Brian is also an actor, and the pair appeared together in mother! “That movie was hardcore, difficult and very stressful,” he recalls. “My brother and I absolutely went at it.” No spoilers, but suffice to say things don’t end well between them onscreen.

Though this might be the year that launches Gleeson into the stratosphere, a filmography that includes the sci-fi mystery Ex Machina, the historical western The Revenant and the epic romance Anna Karenina is one an actor thrice his age would be satisfied with. What, to him, accounts for this early success? Gleeson points to a long-held, irrational belief that he would die prematurely. “I always had this strange sense that I was going to be dead by the time I hit 30 and felt this voracious desire to leave my mark before I went,” he says. “The fact I’ve made it to 34 feels bizarre.” Not that survival has driven his desire away. “I’ve just pushed the benchmark to 40 now.” 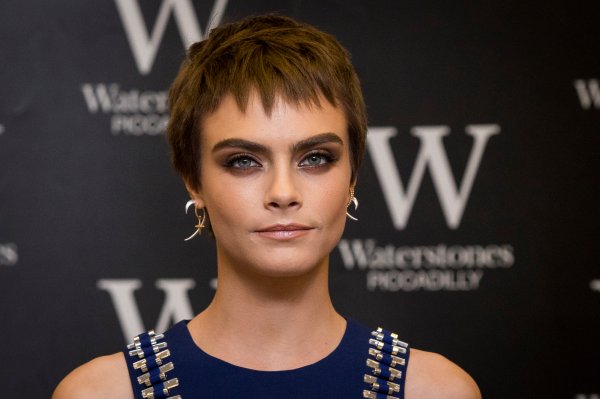 Cara Delevingne Speaks Out on Meeting With Harvey Weinstein: 'I Felt Very Powerless and Scared'
Next Up: Editor's Pick