“President Trump and I will not dignify any event that disrespects our soldiers, our Flag, or our National Anthem,” Pence said in a series of tweets. “While everyone is entitled to their own opinion, I don’t think its too much to ask NFL players to respect the flag and our national anthem.”

Pence, the former governor of Indiana, was attending a game of the Indianapolis Colts, who were playing a home game against the San Francisco 49ers — Colin Kaepernick’s former team. It appeared only members of the 49ers knelt during the anthem, not the Colts, according to the Indianapolis Star. Pence pointed this discrepancy out in a tweet, posting a picture of himself and his wife Karen standing during the anthem, and writing, “We were proud to stand – with all our colts- for our soldiers, our flag, and our National Anthem.”

Last year, Kaepernick, who was playing as a quarterback for the 49ers at the time, routinely knelt during the National Anthem as a silent protest against racial injustice in America.

Kaepernick’s protest morphed into a kneeling movement last month after President Donald Trump sparked controversy when he referred to NFL players who took a knee during the anthem as “sons of bi—es” during a campaign rally in Alabama. More than 100 NFL players and owners linked arms and knelt before and during the anthem following Trump’s attack.

Trump said in a tweet that he had asked Pence to leave the stadium if any players kneeled during the national anthem, claiming such actions were disrespectful. 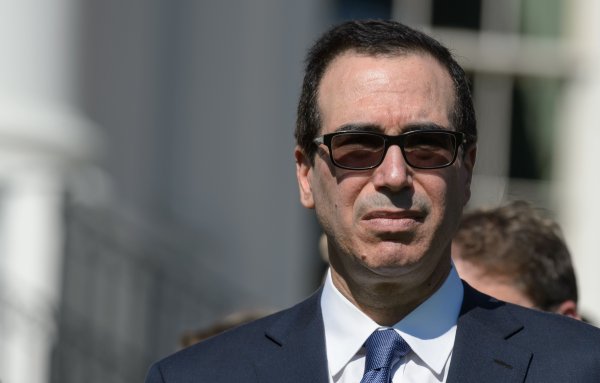 Mnuchin's $800,000 Government Flights Were Legal
Next Up: Editor's Pick