“Senator Bob Corker ‘begged’ me to endorse him for re-election in Tennessee. I said ‘NO’ and he dropped out (said he could not win without…..my endorsement). He also wanted to be Secretary of State, I said ‘NO THANKS.’ He is also largely responsible for the horrendous Iran Deal!” Trump wrote in a series of three tweets Sunday morning. “…Hence, I would fully expect Corker to be a negative voice and stand in the way of our great agenda. Didn’t have the guts to run!”

Corker quickly issued his own response. “It’s a shame the White House has become an adult day care center. Someone obviously missed their shift this morning,” he quipped on Twitter.

A source familiar with the situation told TIME the content of the Trump’s tweets are false. Trump had actually called Corker last week, the source said, and asked him to reconsider his decision to retire from Congress in 2018, claiming that the president would have endorsed him.

Corker did not share a specific reason for retiring. “When I ran for the Senate in 2006, I told people that I couldn’t imagine serving for more than two terms,” he said in a statement. “Understandably, as we have gained influence, that decision has become more difficult. But I have always been drawn to the citizen legislator model, and while I realize it is not for everyone, I believe with the kind of service I provide, it is the right one for me.”

Trump’s attack comes just four days after Corker subtly criticized the president by praising his cabinet officials. “I think Secretary Tillerson, Secretary Mattis, and Chief of Staff Kelly are those people that help separate our country from chaos,” he told reporters following an NBC News report that Secretary of State Rex Tillerson had referred to President Trump as a “moron.”

“They work very well together to make sure the policies we put forth around the world are sound and coherent. There are other people in the administration, in my belief, that don’t,” Corker said. He also said he did not think Tillerson was receiving enough support from the White House. 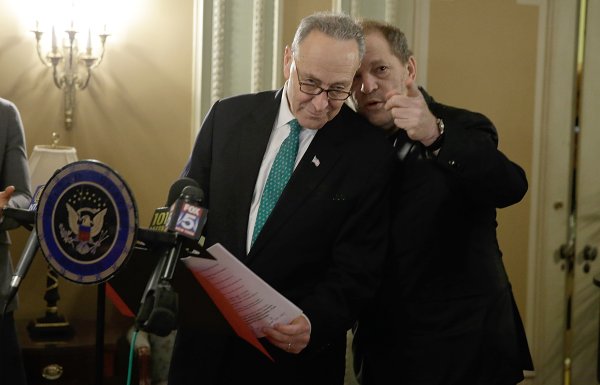 Democrats Return Donations From Harvey Weinstein
Next Up: Editor's Pick