Why President Trump Values Being Unpredictable

Traditionally, the role of the president has been to calm a country at times of unease, but President Trump is breaking with precedent. At a hastily called photo-op with military leaders Thursday, Trump suggested it was “the calm before the storm” and declined to elaborate when repeatedly pressed. It comes after Trump has deployed vivid and at times provocative language to describe the flight against ISIS or potential warfare against North Korea, and as he has rejected diplomatic efforts in the case of the latter. Trump’s off-the-cuff comments caught White House officials unawares, but they were hardly surprised. They’ve grown used to those sort of spur-of-the-moment comments from the president. In the most charitable reading, they suggest that Trump’s foreign policy doctrine is one of unpredictability — depriving allies and foes alike of their confidence in what he might do next. The more alarming perspective views it as a manifestation of Trump’s failure to grasp the power of the presidency — how the entire world hangs on every word uttered by a U.S. leader — and the need for deliberation and precision.

The truth is somewhere between those extremes. Trump’s public and private comments over the years provide a roadmap for how he values unpredictability in negotiation — and he views everything as a negotiation. But to apply a strategic lens to all of his comments would be far too generous, as the individual pronouncements are often driven by ego, slight, or frustration. Determining where Trump falls on the strategic-bombastic scale is a constant challenge not just for journalists, but also for the American public and the rest of the world. Thursday’s comments seem to trend toward the latter end of that span.

With the backing of the NRA and the White House, expect some progress on restricting so-called ‘bump stocks’ like those used by the Las Vegas shooter in the coming weeks. But it will preclude any other movement on gun control on Capitol Hill. Breitbart exposed. And Mueller’s probe continues.

Trump Says Military Gathering Might Be ‘Calm Before the Storm’

When pressed on what he meant, Trump said ‘You’ll find out.” [Bloomberg]

The Las Vegas Shooter Used ‘Bump Stocks.’ Now the White House, NRA and GOP Lawmakers Are Open to Restricting Them

“Maybe it’s the calm before the storm.” — President Trump during a photo-op with military leaders

“What’s the storm?” a reporter asked. “On Iran? On ISIS? On what?” “We have the world’s great military people,” Trump replied. “Thank you all for coming.” “What storm Mr. President?” reporters pressed. “You’ll find out,” Trump replied

Trump Nominates a Coal Lobbyist to Be No. 2 at E.P.A. [New York Times]

64 hours in October: How one weekend blew up the rules of American politics [Yahoo] 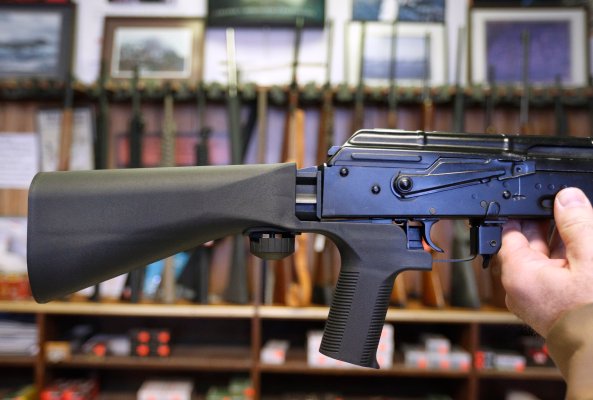 The NRA Is Finally Backing a Gun Restriction. Here's Why It's a Ploy
Next Up: Editor's Pick