The Trump Administration Just Rolled Back the Birth Control Mandate. Here's What That Means

The Trump Administration rolled back an Obama-era mandate Friday that requires most companies to guarantee free contraceptive coverage for female employees under the Affordable Care Act.

Under the new rules, more employers and insurers can now deny birth control benefits on the grounds of “religious or moral objections.”

The new regulations, cosponsored by the Health and Human Services (HHS), Treasury, and Labor departments, could leave many women without access to cost-free contraceptives.

What exactly are ‘religious or moral’ objections?

According to HHS, “entities that have sincerely held religious beliefs against providing such services” can object to covering an employee’s birth control benefits. Additionally, this exemption includes employers or insurers that have a “moral conviction,” even if it is not grounded in religious faith. Under these stipulations, practically any employer can claim one of these objections and be exempt from covering contraceptives, despite the ACA’s overall mandate.

Previously, exemptions only applied to churches and houses of worship based on the convictions of their faith. Even non-profit organizations directly associated with religious institutions, such as hospitals or universities, had guaranteed access to birth control without being charged a copayment or deductible. Third-party insurers were required to cover the cost.

Why did the Trump Administration do this?

President Trump vowed to address the birth-control mandate during his campaign, saying he would “make absolutely certain religious orders” would no longer be “bullied by the federal government because of their religious beliefs.”

In a statement, the Administration said that it wants to protect the “conscience rights of all Americans.” According to the New York Times, the Administration is citing health risks associated with the use of contraceptives, as well as the promotion of “risky sexual behavior” among adolescents.

The Department of Health and Human Services says that the new regulations will go into effect immediately. But it’s likely that many organizations will challenge the ruling with litigation.

“This rule is about taking away women’s fundamental health care, plain and simple,” Dana Singiser, a top official at the Planned Parenthood Federation of America, said in a statement. “If you truly want to reduce the need for abortion, invest in women’s health and preventive care. Instead, this administration is setting up an attack on basic health care. We cannot allow President Trump to roll back the progress women have made over the past century.”

The new contraceptive exemptions does not mean that employers will automatically drop birth control benefits. 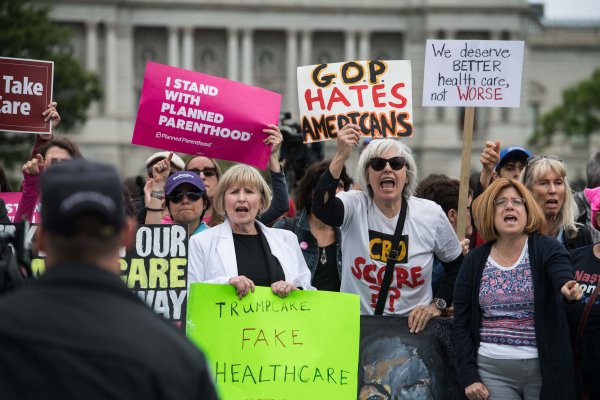 81% of Voters Don't Like How Republicans Are Handling Health Care
Next Up: Editor's Pick