The Nobel Peace Prize was awarded to the International Campaign to Abolish Nuclear Weapons (ICAN) for drawing attention to the “catastrophic humanitarian consequences” of using nuclear weapons and for its efforts in a nuclear treaty, the Norwegian Nobel Committee said on Friday.

ICAN, which was founded in Australia, is based in the offices of the World Council of Churches in Geneva, Switzerland. It acts as an umbrella organization for 468 non-governmental organizations, including peace, rights and development groups, which are all trying to push for global nuclear disarmament.

The group, which was launched in 2007 by past Nobel laureates the International Physicians for the Prevention of Nuclear War (IPPNW), has spent the last decade campaigning for a global ban on nuclear weapons.

Here are five reasons why ICAN might have been awarded the prize this year, in particular:

1. Its work on the first international treaty to ban nuclear weapons

This year, ICAN shepherded the first legally binding international treaty to totally ban nuclear weapons. In June, more than 120 U.N. member states adopted the Treaty on the Prohibition of Nuclear Weapons. But the vote was largely symbolic as nine of the world’s known nuclear-armed states, including the U.S., Russia, Britain and China, boycotted the talks. The vote also needs to be ratified by 50 states before becoming international law.

“The Norwegian Nobel Committee is aware that an international legal prohibition will not in itself eliminate a single nuclear weapon, and that so far neither the states that already have nuclear weapons nor their closest allies support the nuclear weapon ban treaty” the committee said of how proliferation needs to start with the world’s nuclear armed powers.

“The next steps towards attaining a world free of nuclear weapons must involve the nuclear-armed states” said the committee. “This year’s Peace Prize is therefore also a call upon these states to initiate serious negotiations with a view to the gradual, balanced and carefully monitored elimination of the almost 15,000 nuclear weapons in the world.”

2. The nuclear threat from North Korea

The award comes just a few weeks after North Korea tested a nuclear weapon, following a series of aggressive nuclear missile tests throughout this year. Kim’s belligerence has led to a war of words between his regime and U.S. President Donald Trump. During his maiden speech to the U.N. in Sept., Trump threatened to “totally destroy” North Korea if the U.S. is forced to defend itself and its allies.

There are reports Pyongyang might have succeeded in miniaturising a nuclear weapon that could fit on an inter-continental missile. Something that has long been a long-feared prospect by Japan, South Korea and the U.S.

“We live in a world where the risk of nuclear weapons being used is greater than it has been for a long time” the committee said. “Some states are modernizing their nuclear arsenals, and there is a real danger that more countries will try to procure nuclear weapons, as exemplified by North Korea.”

3. The uncertain future of the Iranian nuclear deal

The award also comes at a crucial point for the deal between Iran and P5+1 countries to limit its nuclear weapons program. U.S. President Donald Trump thinks the deal does not go far enough and has hinted at numerous occasions that he will not re-certify the deal on Oct. 15. Reports suggest he could do it as early as next week, which could see sanctions be reimposed on Iran. This is in spite of members of Trump’s cabinet and European signatories to the deal, including Germany, France and the U.K., having implored Trump to uphold it.

In 2015, the deal was forged that ended nuclear-related economic sanctions on Iran in exchange for limitations on its nuclear weapons program. It was heralded as a major diplomatic achievement in the area of nuclear non-proliferation and as the world’s best effort to de-escalate rising tensions between Israel and Iran.

What Trump wants, writes TIME contributor Ian Bremmer, is “a better deal. He wants to extend the time frame on Iran’s compliance. He wants expanded access to military sites. He says it must stop testing ballistic missiles, which were not part of the deal, and halt its support for organizations that Washington classifies as terrorist groups, like Hizbollah and Hamas. Politically, Trump wants to show that Obama made a bad deal and he can make a better one.”

4. Our proximity to ‘doomsday’

The threat of nuclear war is higher than it has been for decades, according to the Bulletin of Atomic Scientists. The group warned in January that it’s now 2 ½ minutes to “midnight” on the Doomsday Clock. This is the closest the clock has been to Doomsday since 1953, when the hands were moved to two minutes to midnight in response to the U.S. testing its first thermonuclear device followed by the Soviet Union.

The Doomsday Clock has been roughly predicting the likelihood of global destruction through man-made disasters such as climate change or nuclear war since 1947. A board of nuclear experts and scientists meet regularly to determine what time it is on the symbolic clock, which has swung between two to 17 minutes till doom since its inception.

The clock’s hands ticked closer to midnight as major nuclear powers Russia and the U.S. actively seek to modernize their nuclear forces. Russia has been strengthening its nuclear arsenal over the past few years. “It will still take Russia at least until the end of this decade to complete its nuclear modernization program. But it is off to an impressive start. Moscow is building a new generation of long-range nuclear bombers, truck-mounted ballistic missiles and nuclear-armed submarines” TIME European Correspondent Simon Shuster wrote in 2016.

Soon after being elected, Trump declared that he would seek to “greatly strengthen and expand [U.S.] nuclear capability.”

Since the advent of the hydrogen bomb, the Nobel judges have repeatedly awarded efforts to rein the world in on nuclear weapons. World-leading chemist Linus Pauling was the first anti-nuclear campaigner to win the peace prize in 1962 “for his campaign against nuclear weapons testing” the committee said. Since then, at least 4 groups or individuals have been awarded for their anti-nuclear weapon work. These include former Japanese Prime Minister Eisaku Sato, Polish physicist Joseph Rotblat and the Pugwash Conferences on Science and World Affairs, which was co-founded by Rotblat and British philosopher Bertrand Russell.

In 1985 — at the height of an arms race between the U.S. and the Soviet Union — the Nobel Committee awarded the prize to the International Physicians for the Prevention of Nuclear War (IPPNW), which itself launched ICAN. 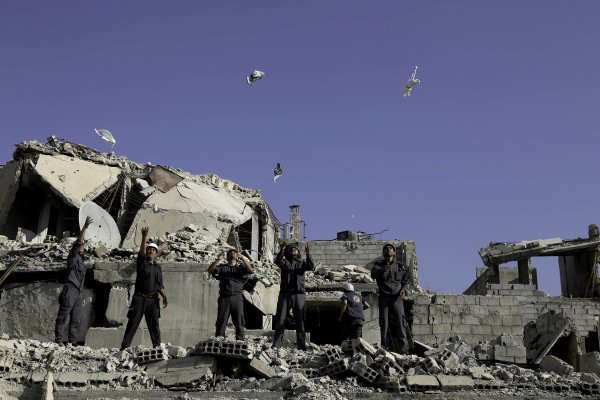 Who Will Win the Nobel Peace Prize? 5 Favorites
Next Up: Editor's Pick