Four young children and a teacher have been killed in what is believed to be an arson attack at a nursery school in Brazil.

Authorities said the suspect is a security guard who allegedly set fire to the daycare center, in Janauba, a town in southeastern Minas Gerais state, the BBC reports.

A further 25 people — mostly children aged between four and five — were hospitalized with burns, with some requiring specialist care at a burns unit in the state capital.

One parent whose son died in the attack told local media that the family was about to move to another neighborhood, according to the BBC.

“I woke up early to drop him at the nursery,” Jane Kelly da Silva Soares told the local O Globo newspaper. “When I saw him again he was already dead in hospital.”

The guard, identified by authorities as 50-year-old Damiao dos Santos, set himself alight at the scene and later died of his injuries in hospital. Police are still looking into the causes of the attack.

Local media reports that dos Santos was sacked from his post in September, upon returning from his annual leave reportedly with a health condition.

President Michael Temer tweeted: “I’m very sorry about this tragedy involving children in Janauba. I want to express my sympathy to the families.” 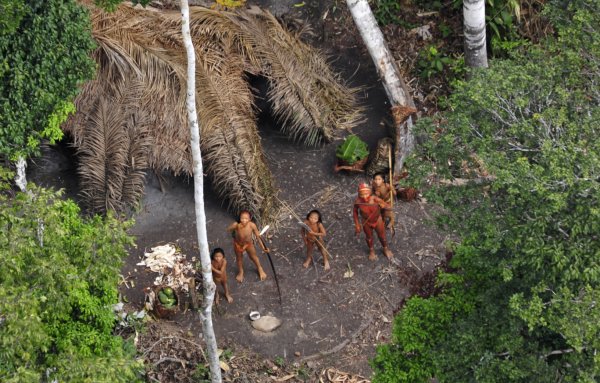 Brazilian Gold Miners Bragged About Killing Members of an 'Uncontacted' Tribe
Next Up: Editor's Pick