St. Vincent Talks About Her New Album 'MASSEDUCTION' and Why She's 'Happy to Be Misunderstood'

In the ten years since she introduced herself to the music world as the guitarist/singer/songwriter/indie darling known as St. Vincent, Annie Clark has gone through a series of stylistic personas that are often tied to the themes of her musical work. From a domestic goddess with a chilling case of ennui (2011’s Strange Mercy) to a futuristic, space-esque rocker (2014’s St. Vincent,) Clark’s all-encompassing personas are nothing short of performance art and her fifth studio album, MASSEDUCTION, is shaping up to be no exception.

In the lead-up to the album, Clark has leaned heavily into her latest creative iteration — a sexy, absurdist bent that she terms “dominatrix at the mental institution” — musically, aesthetically, and conceptually. It’s the reason why her Instagram page is filled with tongue-in-cheek short films of her ruminating on gender, power, and pop culture, while clad in brightly-colored latex and her music video for single “New York” is a visually gorgeous trip that feels like a trip to the Pantone archive with a seductive, unnerving energy. Likewise, her music for the new album, co-produced by Jack Antonoff, holds nothing back, unapologetically reveling in the strange dread and pleasure of life, love, and loss.

Outside of her musical personas, it looks like Clark’s also evolving; it was recently announced that she had signed on to direct a female-centric feature film adaptation of The Portrait of Dorian Grey, a change of mediums for her.

Ahead of the release of MASSEDUCTION, we caught up with the singer before a party at the House of Peroni, an New York City pop-up gallery that she curated in the style of her new album to talk about her new music, her directorial debut and getting your heart broken.

TIME: You’ve said that this album is very personal and that if someone wanted a look into your life, this project could provide that – why choose to focus on the personal with this album?

So many of your songs touch on those very human emotions – like heartbreak and falling in and out of love. Is it difficult to be so vulnerable with such personal themes?

It’s actually not. It’s not hard because I trust in that transitive property, that if it matters to me and resonates with me, it will likely resonate with someone else. I just don’t think there’s anything to be ashamed of in living the human experience. I’m not ashamed of being super low or finding myself in compromised positions or all of the various short stories contained in the album.

What do you hope your listeners get from this album?

I hope they get anything they want. And what I mean by that is that once the record is done and out in the world, it doesn’t belong to me anymore and it shouldn’t. People take it and weave it into their lives however they see fit. I have exactly zero qualms about being “misunderstood” — I’m happy to be misunderstood as long as the misunderstanding isn’t something horrible. I’m happy for people to find their own meaning and their own journey with it.

How do you think it differs from your past work?

I think it’s less oblique. I think it’s more direct. Jack Antonoff were merciless with making sure every song was as airtight as it could be. Every word and every note was thoughtfully labored over.

I love him so much. He’s a wonderful person. He’s one of the luminous ones.

Are there other luminous ones?

Absolutely. Sufjan Stevens is one. My friend Carrie Brownstein — brilliant. The list goes on and on. Cara [Delevingne] is one of the luminous ones for sure – she burns very brightly. So many.

How do you find getting creative in different mediums like your music videos and your upcoming film project?

It’s so thrilling to do new things and to transfer skills that you know from one area to another. I mean, the last record that I did, I was perched on top of a pink throne for god’s sake, it was imperious, it was austere and cold in a certain way. With this one, I wanted for it to be more absurd and taking the piss out of myself and taking the piss out of where we are in culture.

How does the current political climate make you feel about discussing your work?

Even in the sense of rolling out the record, I wanted it to be silly because it feels like the world is on fire, so for someone to come out and be incredibly self-important about releasing a record feels insane. But DO buy my record! It comes out October 13!

Why did you choose to make your feature film debut as a director with this Dorian Grey remake?

Dorian Grey is a story that’s always resonated with me and as I’ve grown up, a lot of the themes were ones I’ve had personal experience with in terms of the idea of alter ego and youth and transgression. So I wanted to retell the story but set in more or less modern times and with a female protagonist. And it’s written by David Burke, who wrote Elle, which is my favorite thing I’ve ever seen.

Why was having a female protagonist so important to you?

The idea of alter ego as it relates to this project is really interesting because it often feels like you have many alter egos or personas when it comes to your music.

Where did you draw creative inspiration from when you were creating this archetype?

Is there a difference between Annie Clark and St. Vincent?

With so many projects and you being about to go on tour, how do you stay inspired and keep up your energy?

It really is having enough time alone to decompress. I’m capable of extroversion, but I’m probably an introvert, truth be told, and so that time is precious. And inputting things that are nourishing like Maggie Nelson or listening to really epic records that go here, go lower than your ears.

Were you listening to anything while you were making MASSEDUCTION?

I wasn’t listening to anything. I did listen to a lot of podcasts. I love You Must Remember This. Also, Love and Radio is excellent. I just listened to The New Yorker one the other day – David Remnick does it and I love David Remnick. 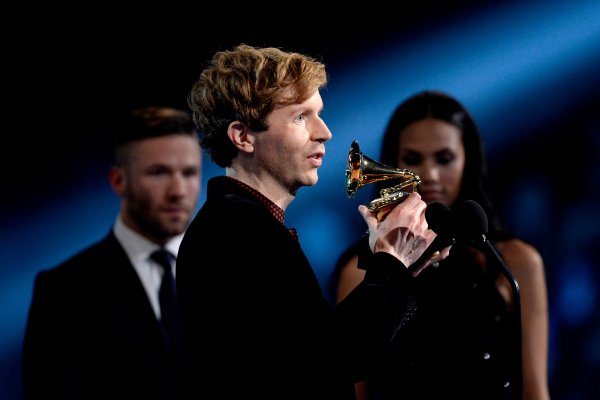 Beck's Colors Finds Joy In Its Time
Next Up: Editor's Pick