The Surprising Reason Canadian Thanksgiving Is Different From the U.S. Version

Between turkey dinners and family reunions, Canadian Thanksgiving — which falls on Monday — can look pretty similar to its U.S. counterpart. But in fact, part of the reason Canadians first petitioned for the holiday was to celebrate their luck at not being American.

Though Canada does have a first Thanksgiving story analogous to the U.S. story of the feast at Plymouth in 1621 — it involves the pirate/explorer Martin Frobisher giving thanks in 1578 for a safe journey, and is likewise highly mythologized — the official holiday got its start in the 19th century.

In the wake of a crisis of faith catalyzed by Charles Darwin’s On the Origin of Species, Canada’s Protestant ministers began in 1859 to petition the colonial government for an official day to thank God, pointing to the bountiful harvests as proof that God exists, says historian Peter A. Stevens. But over the next decade, they found a reason to be even more grateful: they were spared the bloodshed of the U.S. Civil War. The thanksgiving days that the government proclaimed during that era were highly religious, with newspapers printing the Thanksgiving sermons the following day.

“[Thanksgiving] was a solemn, holy day in the middle of the week when people would go to church,” he says, “and thank God for how fortunate they are to be Canadian.”

But Canadians were still hashing out what it even meant to be Canadian. “Canada was about to become a separate country from Great Britain,” he explains. Therefore, so making the holiday into a “Protestant nationalist celebration” was the ministers’ way of creating something to help Canada craft a national identity. (Another holiday, Canada Day on July 1, celebrates the creation of Dominion of Canada, when the British North America Act united the British provinces of New Brunswick, Nova Scotia, Quebec and Ontario.)

But the “Protestant” part of the national celebration soon started to lose its dominance. After all, this was before the advent of the five-day workweek, and people who spent a day in the middle of the week at church were often using up their only leisure time. Soon, celebrants looked for a way to turn the time after church into more of a party. They found a blueprint, ironically, in the very place that had caused them to celebrate not being there: as the idea of a national Thanksgiving spread in the U.S. too, Canadian families got the idea for hosting a harvest feast after reading how Americans celebrated the holiday in readily-accessible U.S. newspapers and magazines. Eventually, the Canadian military started using it as an occasion to start hosting exhibitions too. (There was even a short-lived attempt after World War I to combine Armistice Day and Canadian Thanksgiving.)

Canadian Thanksgiving first moved to a Monday in 1908, after railways lobbied to turn it into a long weekend that could be used to visit family — by train, naturally — and that day change later became permanent. In 1957, a law was passed so that the holiday didn’t have to be re-proclaimed on the second Monday of October each year.

In the years since, the early-autumn timing has been a boon. With the holiday now detached from its religious beginnings, most Canadians think of it as a time to savor the last mild weather before the northern winter starts. 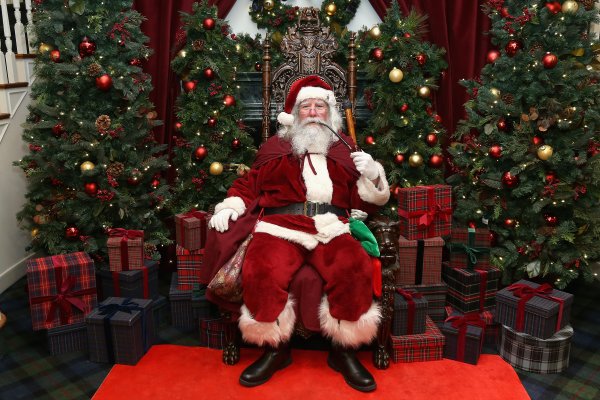 The Internet Is Very Merry Over This Real Santa Claus News
Next Up: Editor's Pick